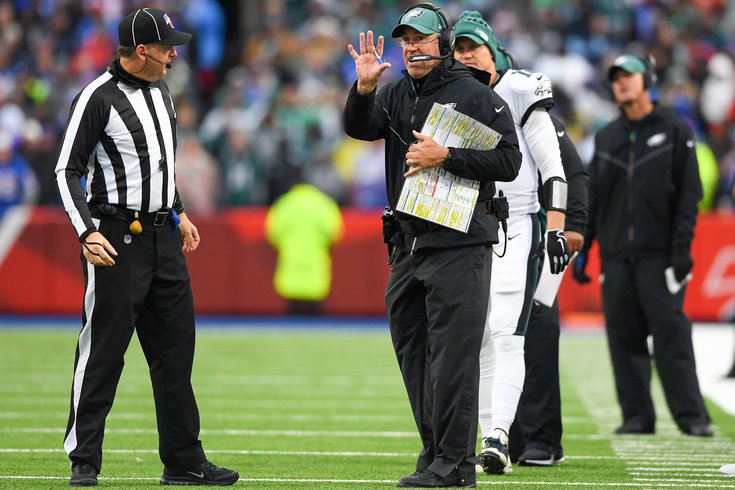 Here's where people around the country have the Eagles ranked after the 2020 NFL Draft. Oh, and here's our sellout version of power rankings, too.

Player who benefited: TE Zach Ertz. The Eagles invested heavily in speed receivers, using draft picks on Jalen Reagor, John Hightower and Quez Watkins and trading for Marquise Goodwin. Add them to DeSean Jackson, and you have a group that will stretch the field and open things up underneath for Dallas Goedert and Ertz, who was double- and triple-teamed last season with few dynamic playmakers around him. The influx of receiver talent will help Carson Wentz too, though the Jalen Hurts selection in Round 2 makes it hard to select Wentz as the player who benefits most from this draft.

#JimmySays: Ertz realized immediately last offseason what the trade for Jackson would likely do for him, and now the Eagles have reinforcements if/when Jackson goes down again.

Packers fans were stunned to watch their team draft a quarterback in the first round of Thursday's draft. Eagles supporters were similarly befuddled when GM Howie Roseman pulled the trigger on Oklahoma quarterback Jalen Hurts with the 53rd overall pick. On the surface, it doesn't seem like a position of need, but Philly can no longer ignore the possibility that Carson Wentz will simply never be a durable quarterback. Hurts provides Doug Pederson with much-needed insurance and a dynamic athlete opposing teams must factor into the game plan (think: Taysom Hill in New Orleans). And let's not act like the Eagles didn't help Wentz out: The team used its first pick (25th overall) on explosive TCU star Jalen Reagor, who molded himself into a first-round target despite being saddled with subpar QB play in college. Deep breath, Eagles fans.

#JimmySays: Ugh, the old super-annoying "You dumb fans don't know what's good for the team you spend countless hours obsessing over" from NFL.com. Anyway, Hurts isn't going to be Taysom Hill. Those comparisons have to stop. Meanwhile, Reagor will help, but he represents the only thing the Eagles did to help Wentz in 2020, as all free agency signings focused on the defense.

Maybe the Jalen Hurts pick will make sense. I can’t say I understand it. It seemed like the selection of a team that is trying to outsmart itself.

They added some much-needed speed outside in the draft, but why did they take Jalen Hurts in the second round? Carson Wentz is the guy - and should be.

The Eagles return Doug Pederson's seasoned offense with Carson Wentz, getting the new speedy wide receiver they needed in Jalen Reagor. Defensively, they further fortified their front with Hargrave and got Darius Slay to clean up cornerback, but linebacker and safety (without Malcolm Jenkins) will be concerns. They will be in a tight fight with the Cowboys in the NFC East once again.

#JimmySays: By the way, I spent most of my Saturday watching Slay. I have concerns.

The Eagles didn’t help themselves in the draft as much as many would have liked them to, but our panel is envisioning a bounce-back year for a squad that won four straight games just to reach the playoffs.

#JimmySays: 5th?!? 😬. Also, while that four-game winning streak to end the season shined a positive light on Carson Wentz, putting the team on his back and whatnot, I don't think it should be viewed as some great accomplishment for the team as a whole. They needed overtime to beat an awful Giants team, and a game-winning drive to beat the Washington team.

Two positions stood out like a proverbial sore thumb for the defending NFC East champions in 2020. The Philadelphia Eagles badly needed help at wide receiver and cornerback.

They got help at wide receiver in the draft, using their first pick on TCU's Jalen Reagor and a fifth-rounder on John Hightower of Boise State. But for reasons known only to general manager Howie Roseman, rather than add a cornerback on Day 2 of the draft, the Eagles elected to select Oklahoma quarterback Jalen Hurts.

It's understandable, given the issues Carson Wentz has had staying healthy, that Philly wants a viable Plan B under center. But that was a lot of draft capital to expend on one given the razor-thin margin between the Eagles and Dallas Cowboys last year.

The Eagles are a good team with a track record of success in recent years that includes a Super Bowl win. But the receivers still aren't great, and the secondary is an antonym for great.

In a stacked NFC, that could mean trouble in 2020.

#JimmySays: An "antonym for great," huh?