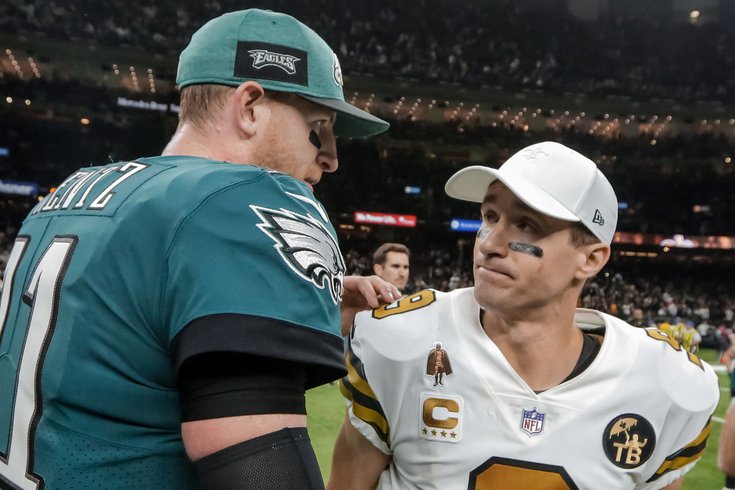 Doug Pederson and Carson Wentz would love to have the same kind of sustained offensive success that Sean Payton and Drew Brees have had.

16) Panthers (5-11 in 2019): Remember when the Panthers got out to a 4-2 start last season, and people were talking themselves into Kyle Allen as an NFL starting quarterback? That was fun. In their final 10 games, they went 1-9, losing their last eight, with five losses by at least 20 points. Their point differential in those final 10 games was -163.

The team's best player is of course RB Christian McCaffrey, who led the league with 403 total touches.

The following is a list of running backs since 2000 who had 400-plus touches in a season, and what happened to their yards per carry numbers from that heavy-usage season to the next season:

The Panthers put a ton of mileage on their best player in a wasted season. Like, even late in the season when they were already eliminated, McCaffrey was taking unnecessary hits. He had 27 touches Week 15, and 28 touches Week 16. Morons.

15) Washington (3-13 in 2019): After spending first round draft picks on their defensive line in each of the last four years, the Washington team may just have themselves a formidable front. Clearly, the D-line is the strength of their team, and it has to potential to become one of the best in the league. That's a good start.

Unfortunately, offensively, they have Terry McLaurin, and then... nothing. They're not going anywhere in 2020.

That said, I do kinda think they'd be a fun team to take over for as a GM. If Dwayne Haskins proves that he can be a franchise quarterback in 2020, great! If not, they'll probably be picking top 3 again, and can take another crack at a quarterback in what looks like a good class in 2021.

14) Giants (4-12 in 2019): Until only recently, new head coach Joe Judge refused to speak any of his players' names in press conference settings, with the following explanation from the NFL Combine, via Jordan Raanan of ESPN:

"Every one of our players is going to come here with a blank slate and be able to compete from the ground up from day one. ... No one has a spot."

Oh, Saquon Barkley doesn't have a spot? Really? That's disingenuous high school Harry nonsense, and it doesn't play in the NFL, where players want to be treated like men and receive honesty from the coaching staff. That might work for an established legend like Bill Belichick, but disciples of his with no head coaching experience shouldn't be walking into their first ever head coaching job with an air of superiority from Day 1.

13) Lions (3-12-1 in 2019): Speaking of Belichick disciples, can anyone explain to me how Matt Patricia still has a job? Sure the Lions' 3-12-1 record had a lot to do with Matthew Stafford getting hurt (the Lions were 0-8 without him), but Patricia's side of the ball, the defense, was 31st in yards allowed and 26th in points allowed after spending heavily on the defensive side of the ball during 2019 free agency.

The Bears hoped that the light would go on for Mitchell Trubisky last season, but he regressed, and the team brought in Nick Foles, who is probably the de facto starter for now.

The Bears have entered NFL purgatory, where their defense is good enough to win them a minimum of 6 games, but their ceiling is probably a first round loss in the playoffs. They're good enough to win some games, but not bad enough to have their first choice on a quarterback in a draft, like they had in 2017, when they blew it by taking Trubisky over Patrick Mahomes and Deshaun Watson.

From an Eagles perspective, maybe taking J.J. Arcega-Whiteside instead of DK Metcalf or Terry McLaurin doesn't feel so awful, by comparison.

Looking forward, L.A. is in trouble after becoming top-heavy as a result of some extremely lucrative contracts, two of which now look awful:

Jalen Ramsey, who the Rams traded for at the deadline for two first-round picks, will be breaking the bank next. That move is already looking bad, as part of the idea behind that trade was assuredly that Ramsey would help them in the playoffs in 2019, which again, they didn't even make.

Meanwhile, Gurley and Cooks are gone, and Cooks will count for $21.8 million in dead money in 2020.

Additionally, the Rams severely lack good, young players as a result of trading away a slew of first round picks for Goff and Ramsey. They haven't made a first round pick since taking Goff, in 2016, and they don't currently have another first round pick until 2022. That would be a gap of five years without making a pick in the first round.

Meanwhile, other parts of the roster have gotten worse. Their offensive line stinks, and they lost key free agents like LB Cory Littleton and DE Dante Fowler. The Rams should still be somewhat competitive in 2020, but their run atop the NFC West is over.

Oh, and their new logo is terrible.

9) Cardinals (5-10-1 in 2019): I'm not typically one to overreact to shiny new skill position player acquisitions, but I have to admit that the additions of DeAndre Hopkins and Kenyan Drake make this Cardinals offense dangerous:

I also kinda like their mix of youth and vets on the defense. They're maybe still a year away, but this is a team on the rise.

8) Buccaneers (7-9 in 2019): I'm going to have to mute Adam Schefter if his nauseating Tom Brady fluffing continues. My favorite example was when the Bucs signed a backup offensive lineman:

The Bucs will be better going from the extremely turnover prone Jameis Winston to a game managing late-career version of Tom Brady, but the idea that this is now suddenly some kind of immediate Super Bowl contender is crazy to me.

They could very well get in the playoffs as a wildcard, but that's probably their ceiling in a division with the far better Saints.

7) Cowboys (8-8 in 2019): Yes, yes, I know, the Cowboys got CeeDee Lamb and now they are going to be unstoppable. Of course, they also lost their best defensive back (Byron Jones), their most productive edge rusher (Robert Quinn), a very productive slot receiver (Randall Cobb), a good young DT (Maliek Callins), and some other starters / role players in TE Jason Witten, S Jeff Heath, iOL Xavier Su'a-Filo, and DE Kerry Hyder.

The net losses far outweigh the net gains, but it would not be a true NFL offseason without some delusional Cowboys hype.

6) Eagles (9-7 in 2019): When Philadelphia finds a way to have nice things, it doesn't last very long. The 1983 Sixers won it all, and could have been a dynasty, but weren't. The 2008 Phillies got over the hump, and seemed primed for multiple World Series, but nope. And now the 2017 Eagles, who found the ultimate success with a roster that felt like it could sustain greatness for a while, now feel like each offseason they get a little further away from what they were.

They still have a good roster, highlighted by a legitimate franchise quarterback, a great offensive line, and an intriguing (though expensive) interior defensive line. But there are certainly still concerns at plenty of other spots.

The Eagles will have a chance to compete for a Super Bowl, as always with the important caveat, "if they can stay healthy." But it's worth noting that they will have nine starters who will have turned 30 years old by the time the Eagles play in their first playoff game in 2020, should they make it that far, 10 if they bring Jason Peters back. Two points on that:

1) Having that many older players won't help on the "if they can stay healthy" front.

2) Their window is beginning to close, if they can't successfully reload.

5) Packers (13-3 in 2019): In Aaron Rodgers' eight career playoff losses, the opposing team has averaged a staggering 36.4 points per game. Here are the Packers' defensive DVOA rankings since the Packers won the Super Bowl in 2010:

The Packers' spanking at the hands of the Niners in the NFCCG looked a lot like a run-heavy college team like Navy beating up on a team like East Carolina or something. When the opposing offense runs it for 285 yards on you and they only attempt eight passes, you have major problems. This team was nowhere near as good as their 13-3 record in 2019 would indicate.

Over the last decade, Rodgers has been arguably the most talented player in the NFL, and the Packers have obviously not needed to worry about the quarterback position over that span. It's kind of incredible that their front office hasn't been able to find a way to field a good defense.

Rodgers is no longer the most talented football player in the NFL. That torch has definitively been passed, and it's beginning to feel like Green Bay will have only won two Super Bowls over three decades with Brett Favre and Rodgers.

4) Vikings (10-6 in 2019): For years, you could always point to the Vikings' offensive line as the reason they would eventually fail.

Like in 2017, they got out to a fast start in Philadelphia in the NFCCG, but a Chris Long hit on Case Keenum caused an off-target throw, which was intercepted by Patrick Robinson and returned for a TD. Later, down only 7, Derek Barnett's sack-fumble stopped a key Vikings drive, and the Eagles put them away thereafter, dominating up front.

Or in 2018, in a win-and-in game Week 17 against the Bears, who had nothing to play for by the way, the Vikings were dominated by the Bears' front, gaining only 63 yards on the ground, while Cousins was sacked four times.

They've certainly tried to fix it. A look at the offensive linemen they've drafted just over the last five years:

From that group, they found three starters in Bradbury, O'Neill, and Elflein. They also spent big money on the open market on Riley Reiff. It still isn't fixed, so they drafted three more offensive linemen in the 2020 draft. They draft linemen like the Eagles draft corners.

There's maybe some hope that Bradbury, O'Neill, and Elflein, who are all still on their rookie contracts, will take a step forward this year. We'll see.

3) Seahawks (11-5 in 2019): Speaking of perennially bad offensive lines, there's the Seahawks. Except, it's amazing how good Russell Wilson has been, playing behind that crappy offensive line for so many years.

To note, I don't believe the Seahawks are worthy of the No. 3 spot, necessarily, but I don't think anyone else behind them is either.

1) Saints (13-3 in 2019): At some point Drew Brees is going to stop playing football. Until he does, the Saints are a sure bet to score a lot of points. Here are the Saints' offensive yards and points rankings since Brees and Sean Payton have been together in New Orleans:

Of course, we'll see if they choke in the playoffs again, but they're as safe a team to hitch your wagon to in the preseason as any.