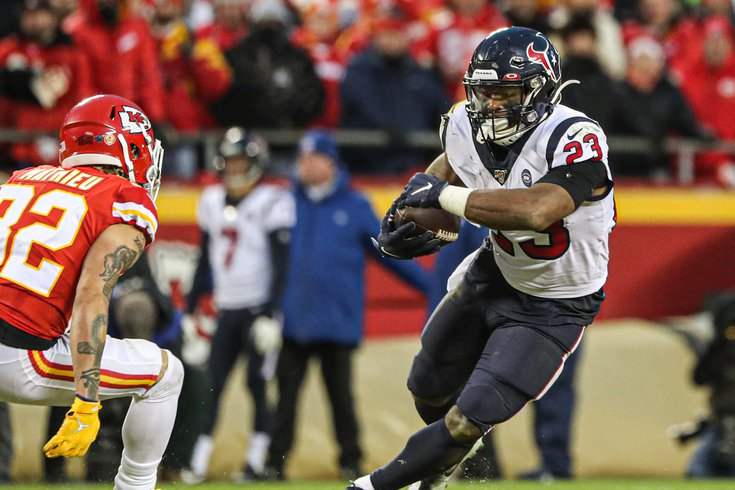 The Eagles are reportedly interested in free agent running back Carlos Hyde.

That the Philadelphia Eagles are reportedly still in the market for a running back isn't a huge surprise. They currently lack some depth at the position, especially when it comes to having a veteran voice in that meeting room aside from coach Duce Staley.

Shortly after the Eagles re-signed Super Bowl hero Corey Clement, NFL Insider and co-host of the Inside the Birds podcast Adam Caplan reported that the Eagles could still be in the market for a veteran to pair with Miles Sanders, Boston Scott and Clement. And now, it appears, a name as emerged for who they might be targeting.

Here's more from Caplan, via the latest edition of Inside the Birds with co-host Geoff Mosher:

“They want to sign a veteran running back. […] The guy that I know they have some interest in, and we’ll see if it happens, is a guy that’s really, really talented. […] The Eagles, I’m told, have interest in him. […] I’m told Hyde is a guy they’re targeting." [h/t Bleeding Green Nation]

Caplan also said that Hyde was the veteran he was alluding to back when the team signed Clement.

Hyde will turn 30 in December, an age typically looked at as the end of the line for most running backs, although more and more players are playing successfully beyond that age as teams run less and opt for running-back-by-committee over a single workhorse in the backfield. And, with just three seasons of over 200 touches, Hyde likely still has some tread on his tires.

Last season in Houston, Hyde showed that by having one of the best seasons of his career. The six-year vet totaled 255 touches, the second-most in his career, but also finished with the second highest yards-per-touch number of his career. Hyde also set a new personal high for rushing yards in a season with 1,070 last season, and although his receiving numbers were low, that was likely more of a product of his environment than a knock on his abilities. After all, Hyde had 59 receptions back in 2017 with the 49ers, so he's more than capable of being a receiving threat out of the backfield.

Last month, we took a look at running backs who could interest the Eagles and identified Hyde as the perfect fit for the Birds.