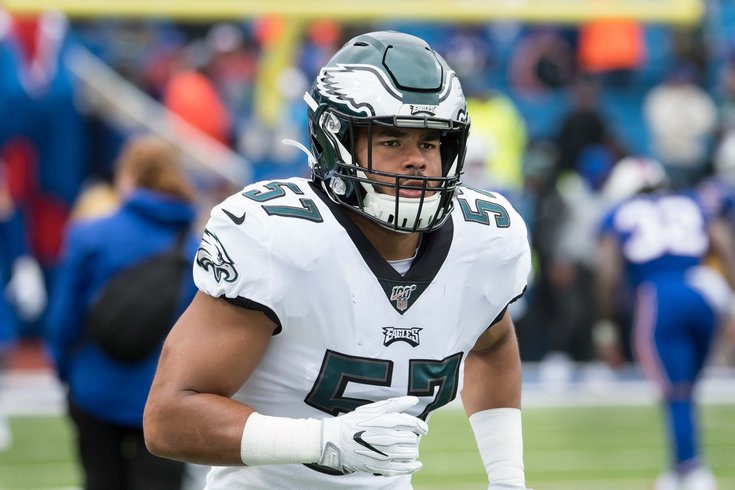 So far, most of the profiles we've already completed have been negative. Edwards' review will be mostly positive, as he looked better than expected.

Why did Edwards go undrafted?

Edwards was very productive in college at Wisconsin. He led the Badgers in tackles as a freshman, sophomore, and senior, and was second as a junior in 2017. Over his last three seasons, Edwards had 10 interceptions. His numbers:

Linebackers who put up that kind of production at a program like Wisconsin typically get drafted. So why not Edwards? Well... athleticism, or a lack thereof.

Edwards' SPARQ score was below the fifth percentile among off-ball linebackers. On top of that, he doesn't exactly have great size either.

That spider chart shows that Edwards is shorter and lighter than your typical NFL inside linebacker, with shorter arms, smaller hands, and less strength in the weight room.

Just being a good football player isn't always enough. In today's NFL, you'll see athletic guys like Davion Taylor (0 career INTs or FFs in college) go in the third round, while productive, but athletically deficient guys like Edwards go undrafted.

In those 112 snaps, Edwards had 22 tackles, which means that he made a tackle on 19.6 percent of the plays he was on the field. That is impressive production. It is worth noting, however, that Jim Schwartz only put Edwards on the field in likely run down situations. According to ProFootballFocus, Edwards played 89 snaps against the run, and only 33 snaps against the pass.

Here's what I saw:

• Pro-Football-Reference.com had Edwards down for one missed tackle on the season. I think(?) I watched all 112 of Edwards' snaps in the regular season, and I didn't see that missed tackle. Maybe it happened on special teams? Whatever the case, Edwards is a very sure tackler.

• Edwards does a great job of shedding blocks and getting to the ball carrier, whether that be against a fullback, or an offensive lineman with 80 pounds on him.

• Edwards' toughness is on full display, as he is willing to crash into lead blockers, creating traffic jams in front of ball-carriers, even if he isn't the defender making the tackle.

• More often than not he recognizes the play, and he's quick and decisive to react when he does. Yet, he still plays under control. He plays downhill, but isn't reckless when doing so, in that he reads and reacts to play action and misdirection.

• He didn't have any official forced fumbles on the season (he did have one against Buffalo that didn't count), but you can see that he tries to be opportunistic in punching and ripping at the football.

• He has a non-stop motor. He made several hustle plays, and is always looking for contact even if he can't get to the ball carrier.

• Coverage is questionable. Perhaps better stated, he's largely untested in coverage. In a small sample size, it's fairly obvious that he sees the field well, and is aware of what the opposing offense is trying to do, but faster running backs and tight ends shouldn't have much trouble getting separation on him, due to the lack of speed. If he is going to be more than just a third linebacker on run downs, it's only a matter of time before opposing offenses try to take advantage of man-to-man opportunities against him.

A look at his game in Twitter thread form:

Edwards is very likely to have an increased role in 2020. At a minimum, he should be in the game when there are three linebackers on the field. He was very good against the run as a rookie, and he can fill a role in Jim Schwartz's defense similar to that of Joe Walker or Dannell Ellerbe, but potentially be much better than anyone the team has had in that role. That would put his game participation share at somewhere around 10-30 percent, depending on the opponent.

He could be a key player against some of the teams in the NFC that want to run the ball, like the Cowboys, Giants, 49ers, and Seahawks, for example.

The question is whether Schwartz will allow Edwards to show that he can be something more than a run down specialist, or if concerns with Edwards' athleticism will limit him to that role.