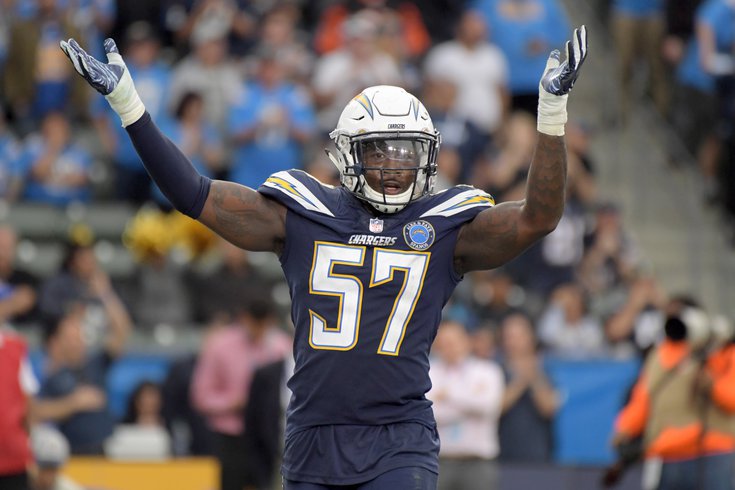 We'll also get to guys like Darius Slay, Javon Hargrave, Will Parks, Nickell Robey-Coleman, Andre Dillard, T.J. Edwards, Jalen Mills (in a safety role), Avonte Maddox (as an outside corner), Josh Sweat, and others, if you have requests.

Brown was drafted by the Chargers in the fifth round of the 2016 NFL Draft. His career numbers:

As you can see, he had a reduced role last season. Over his career, Brown has made a decent number of tackles, but has been light on splash plays. In 2019, he had 10 tackles (none for loss) on 92 defensive snaps at linebacker, plus 210 special teams snaps. Obviously that is less than awesome production.

Those who follow the Chargers closely mostly think that Brown had a very promising rookie season, but injuries and a scheme change perhaps stunted his growth.

In 2019, there's really no way to sugarcoat his play. He was bad, as you'll see in this Twitter thread:

Conclusion: Brown signed a one-year deal worth $1,047,500, $550,000 of which is guaranteed. That's fine. Yes, the 2019 tape is clearly bad, but I don't think this is a bad signing, necessarily. Brown has good speed, which makes him a viable special teams contributor, with some upside in coverage in sub-packages because of his athleticism. It'll be on the Eagles (and Brown) to unlock his potential.

I will admit that before watching his tape, I had Brown currently as the No. 3 linebacker on the depth chart, but I have since bumped Duke Riley into that spot instead, ha.

MORE: WTS: Who will Eagles target in NFL Draft? Will they trade up for a WR? Trade back? | Report: The Eagles tried to trade Alshon Jeffery last season | Fletcher Cox, three former Eagles named to NFL's All-Decade team