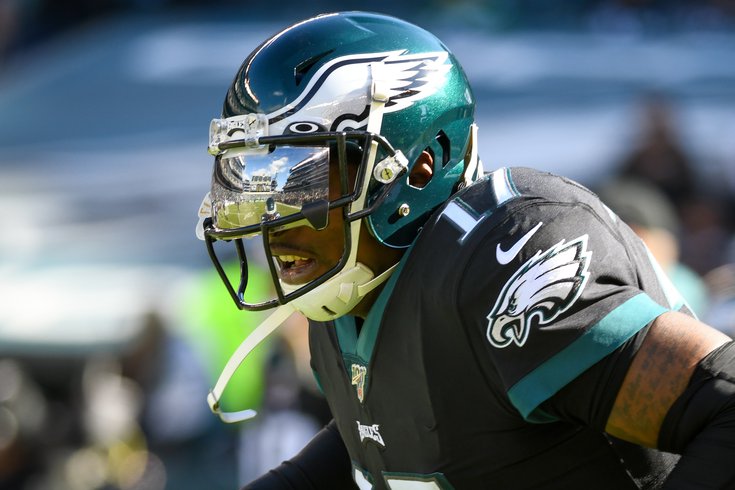 Alshon Jeffery during the Philadelphia Eagles game against the Chicago Bears at Lincoln Financial Field in Philadelphia on November 3, 2019.

It didn’t take long before Howie Roseman realized that he had made a mistake when he guaranteed Alshon Jeffery’s salary for 2020 just before last season.

The Eagles general manager began actively shopping Jeffery about a month later, NFL sources told The Inquirer, as the wide receiver’s production waned, his injuries mounted, and he became implicated as the anonymous source behind disparaging comments about the team to ESPN.

Jeffery had become aware that he was on the market and was troubled by the mixed messages he had received from the team, a source close to the receiver said.

The timeline here is interesting, in that Roseman seemingly tried to deal Jeffery before "Josina Anderson Anonymous Report, Part II."

• "About a month later": Roseman begins trying to deal Jeffery.

• October 17, 2019: An "anonymous player," later to be outed as Jeffery, criticizes Roseman (for not trading for Jalen Ramsey), and Carson Wentz.

As we noted in our Alshon Jeffery offseason primer of sorts, trading Jeffery, in his current state, will be almost impossible, seeing as (a) he has a serious Lisfranc injury from which he likely won't be recovered until at least September, (b) he did not play well in 2019, and (c) you know, the anonymous bashing of teammates and the front office.

Releasing Jeffery would have been extremely difficult before a new collective bargaining agreement was reached, as his full dead money hit of over $26 million would have been applied to the 2020 salary cap. With a new CBA completed, the team can now use a somewhat more palatable "June 1" designation on him, which would delay a sizable chunk of the $26 million dead money hit until 2021.

Many (self included) assumed that the team would release Jeffery quickly after that June 1 designation became available. They did not.

In a conference call in March, Roseman addressed Jeffery, unprompted.

NFL teams don't appear poised to gather anytime soon amid the global COVID-19 outbreak, so there's really no rush to release Jeffery. Hell, the on-time start of the 2020 season is questionable, at best.

Should Jeffery recover fully from his Lisfranc injury and the offseason extends into the fall, Roseman might at least have a puncher's chance of dealing him, which would save the team roughly $10 million in dead money, so their patience makes sense.