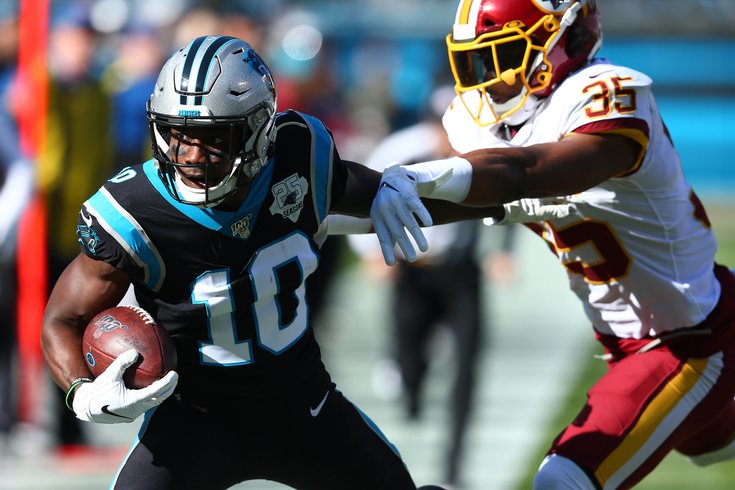 Should the Eagles try to trade for Carolina Panthers wide receiver Curtis Samuel?

There's been a lot of talk about the Eagles upgrading the wide receiver position this offseason. But, three weeks into free agency, the Birds still have the same receiving corps as they did at the end of the 2019 season (minus Nelson Agholor, who left to sign with the Raiders last month).

Sure, DeSean Jackson should be back and healthy, but that could change at any moment as we saw last season. He's also a year older. Alshon Jeffery is still a question mark, as the team could still part ways with the veteran wideout this offseason. But even if he is back on the roster, there's a chance his broken foot keeps him sidelined for the start of the season. Then there's J.J. Arcega-Whiteside, who was solid in camp before completely disappearing during the regular season. Hopefully that year of experience served him well, but we won't know that for sure until the season actually starts. And finally, there's Greg Ward, who found himself elevated to the 53-man roster after injuries to Jackson and Jeffery, and through his play down the stretch proved that he belonged in the NFL. Of course, that could've been an aberration and seeing him perform over the course of a 16-game season may be the only way we get an accurate read on the former college quarterback.

Luckily the Eagles have one of the best tight end situations in the league, but, as you can see, they have more than a few question marks at wide receiver, which is why it would've made sense for Howie Roseman and Co. to at least add one to the roster prior to the draft. While it's set to be a historically deep draft at wideout, there's still plenty that can go wrong. The guy they want could go off the board before they pick at 21. They could wind up making the wrong pick and drafting a bust — after all, they haven't had a ton of success at the position in recent drafts, although none of those guys have been first-round talents. Or another player at a different position could fall to them, and they might be forced to change plans and wait until the second round to target a receiver.

Furthermore, entering a draft with a glaring need that every other team knows you're going to address in the first round makes it much more difficult to trade up to get your guy, at least at the price you want.

Last week, our own Jimmy Kempski identified wide receiver as the Eagles biggest need at the moment, and after the team missed out on the likes of Amari Cooper, Emmanuel Sanders, Robby Anderson and others in free agency — not to mention DeAndre Hopkins, Stefon Diggs and other via trade — he wrote previously about why this strategy of not addressing the position now and waiting for the draft is not the smartest idea. Especially if the team hopes to contend in 2020.

That's why we've continued to write about wide receivers, because even though the Eagles haven't made a move at the position just yet, it seems like one they should address before the draft — and although most of the biggest free agent names have already signed, leaving only backup-level players on the market, there have been a few players to come available on the trade market.

Over at The Athletic, Sheil Kapadia wrote about seven hypothetical NFL trades that could still happen this offseason, and somewhat unsurprisingly, he had the Eagles trading for a wide receiver, but not the one many people were talking about at this time a week ago.

Recently, we took a look at whether or not Rams receiver Brandin Cooks, who had a down year in 2019 and struggles with concussions, would make sense for the Eagles via trade. And Peter King even listed the Eagles as a potential top landing spot for Cooks should he get moved. And while he still remains an option for the Birds, there's another name out there who wouldn't cost nearly as much in terms of dollars.

Here's more from Kapadia, who covers the entire NFL now but lives in the area and had previously covered the Eagles for years.

4. Panthers trade Curtis Samuel to the Eagles for a third-round pick and Sidney Jones

Sources told The Athletic’s Joseph Person that the Panthers aren’t shopping Samuel, but they might consider moving him for the right offer. Would this proposed deal be strong enough? Maybe. The case for the Panthers would be that they just signed wide receiver Robby Anderson in free agency and already have D.J. Moore. Christian McCaffrey’s 142 targets last year were tops on the team and eighth league-wide. Do the Panthers see Samuel as a key part of their future? If not, he’s entering the final year of his deal, and they might want to get something back for him.

As for the Eagles, they have not added a single wide receiver this offseason and appear to be banking on the draft. But as mentioned, wide receivers taken in the first and second rounds over the last five seasons have averaged just 459 yards as rookies. The Eagles need to set the floor at the position and can’t afford to go into next season with DeSean Jackson, JJ Arcega-Whiteside, Greg Ward and a rookie.

Samuel will be 24 at the start of next season. He has 4.31-second speed in the 40-yard dash and could line up outside or in the slot in the Eagles’ offense. Samuel caught just 51.4 percent of his targets last season but finished with a career-high 54 catches for 627 yards. He’s due just $1.2 million in the final year of his rookie contract.  [theathletic.com]

Before going on, I think it's worth pointing out that Sheil doesn't mention Alshon anywhere in his post. And knowing Sheil, I don't think that's an oversight. Does he know something we don't about Alshon's future in Philly? Or was he simply left off the list because Sheil says "going into next season" and there's a chance his foot hasn't fully healed by then. Either way, it's an important omission.

Sheil goes on to note that the Panthers are in need of a corner after losing James Bradberry in free agency last season, and moving on from Jones would make sense as he's fallen out of favor in Philly and has struggled to get on the field even when healthy. But he has upside. And if the Panthers don't like Jones, the Eagles could offer Rasul Douglas, who is already reportedly on the trade block, instead.

Sheil adds that, like Jimmy, he struggles to envision the Eagles going into the draft with their current crop of wideouts, and thinks that a player like Jones (or Douglas) and the 103rd pick might be enough to pique the Panthers interest, given their own needs.

It's also worth noting that Sheil mentioned another wide receiver trade in his post, this one from Brandin Cooks. He has the cost for Cooks being less than it is for Samuel (a fourth-rounder and a conditional 20201 pick), which seems like a steal considering he's been traded for a first-round pick on multiple occasions in the past and has put up much better numbers than Samuel.

That being said, Cooks carries a $16.8 million cap hit this season and would remain under contract (at the same cost, or higher) for three more years after 2020. With Samuel, on the other hand, you may only be getting one year of control, but you're getting it at a much more palatable price, which is important to Roseman and the Eagles at this point in the offseason, and you'll have the opportunity to negotiate an extension if things work out.

Could Samuel be the speedy wideout the Eagles have been looking for? Stay tuned...