What they're saying: When will sports leagues return? HORSE? Will NFL have fans? 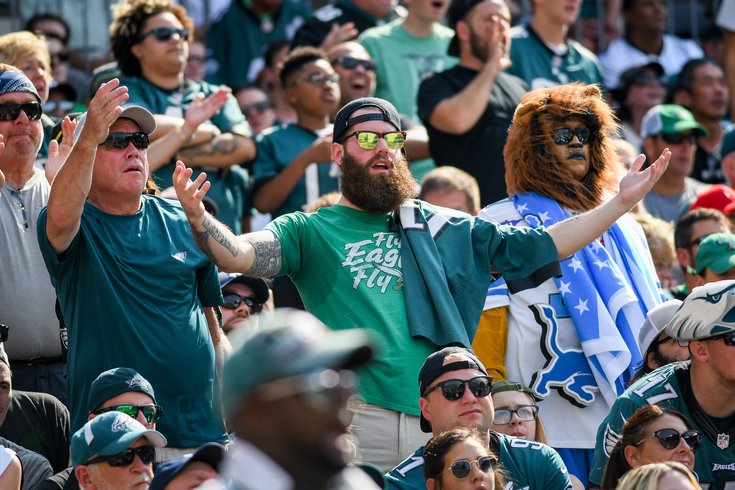 The Eagles' trade back is fine, friends.

The timeframe for when sports will return is a secondary concern right now, but one worth contemplating.

Not only are there several billion-dollar industries that would help the economy in the NBA, NHL, NFL, MLB and others, but they would provide a nice distraction and, while the self-quarantine continues, could give Americans a reason to stay home with games potentially on television.

The logistics, however, as well as the strain on the healthcare system that a return would cause are major headaches and all of the respective league commissioners are dealing with tons of difficult variables to maneuver.

President Donald Trump had all of them on a phone call Saturday, where he (among other things) told the NFL he wants them to play games, with fans in attendance, as scheduled in September.

That's quite the ask — especially with no virus cure or vaccine in sight.

On his daily press briefing just now @GavinNewsom tells me flatly re #NFL starting season on time w/fans in stands in the CA stadiums: "I’m not anticipating that happening in this state." @AdamSchefter https://t.co/ejqC423Vtk

The decision to return to the field isn't the President's, nor in many cases is it the commissioner's call. Different states and cities have different rules regarding large gatherings, and even if the DCD and Trump were to say something was safe if all 32 cities don't have the same guidelines, having games with fans would be impossible.

Having games without fans is a sticky situation as well, as the contracts players agree to depend on revenues that will most assuredly be less due to a lack of fans or having less games played.

That's a topic for another article. For now, fans are desperate for any kind of news on when they will see their teams back together.

The NFL is a long way from making its decision, but the other leagues, like the NBA, are inching closer and closer to having to decide whether to cancel their seasons. Here's the latest on what they're saying about whether we will get any baseball, hockey or basketball for the rest of 2020...

What happens in Vegas

The English Premiere League is contemplating finishing its season — which is 92 remaining games — in a remote part of the country without fans and on television for the English fans to have something to watch and distract them during this difficult time. Whether or not they can pull it off remains to be seen (they announced yesterday the return would not be in May). But if it winds up happening, the NBA (which was the first league in the USA to cancel) may be following closely to return:

Quarantining in one location is the only solution, and Vegas is the only city the NBA is currently giving any kind of serious consideration, per an NBA source. But even that faces enormous hurdles. Thousands of players and staffers would descend on Las Vegas for an event like this. Thousands of supports staff at hotels and arenas would be needed to make it work. Not to mention broadcasters and media. Testing would have to advance significantly in the coming months. Rapid tests, like the one now being produced by Abbott Laboratories, would have to be widely available. An event that could be squeezed into a few weeks would require tens of thousands of tests.

The NBA has a social responsibility here, too. There is public outrage at how asymptomatic NBA players have received coronavirus tests while everyday patients with symptoms can’t get them. Tests will need to be as cheap and readily available as thermometers for the league to justify using them to conduct a postseason. The spread of COVID-19 would have to dip significantly in the coming months, or the NBA will be accused of prioritizing profits over safety. Said a high ranking team executive from a playoff team, “We all want to play. But we all know we can’t play until things are dramatically different.”

Sending 16 teams to Las Vegas to play games in hollow arenas isn’t ideal. But it could evolve into a fun, one-time event that would bring the game back and, more importantly, get the television revenue flowing. Players would likely resist the idea of decamping under one roof—LeBron James already has—but the bet is if it means the paychecks keep coming and a champion will be crowned, they will come around.  [SI.com]

In the meantime, fans may be able to get some NBA action in their own homes in the form of the schoolyard favorite Horse:

Discussions have been ongoing among the NBA, NBPA and ESPN about a competition among several players in isolation -- presumably using home gyms -- that would include them competing shot for shot in the traditional playground game, sources said.

Details, including a schedule and specific player involvement, are still being finalized.  [ESPN]

The players are starting to see the writing on the wall — perhaps the fans will start seeing it too. In a conference call with media members last week, Flyers forward Kevin Hayes spoke a bit about the sting of seeing their red-hot dash toward a home playoff series and perhaps their best chance at a Stanley Cup in a decade stopped flat due to the virus. They may not get to see it through.

The Flyers (41-21-7) had climbed to within one point of first-place Washington in the Metropolitan Division. Now, Hayes realizes, the season is in jeopardy.

“I think everyone is a little concerned about that,” he said when asked about the possibility of the season’s not resuming. “It sucks because you play this game, you build friendships, you build memories, you build moments where you want to go for the Stanley Cup. I felt our team had come together in a great way. We were really playing for one another and everybody was buying into the system.

“And now there’s a possibility that we’ll never see the outcome of that,” he added. “... I assume we’re going to be this good all the time, but who knows if we’ll have this feeling again?”   [Inquirer.com]

And finally we have baseball, which has yet to see a single official at-bat in 2020 despite Opening Day having been two weeks ago. There are seemingly endless possibilities of what a truncated season could look like, from multiple double-headers per week to a shortened schedule to neutral site games in the winter to a short tournament-only format.

However, with a second wave of coronavirus very possible after the curve is flattened, large public gatherings are not likely to be safe in time for baseball to commence in its known form. Will they, like the NBA is discussing, have a quarantined fanless-season?

MLB is prioritizing public health as it examines all possibilities, sources say. The season, at least initially, could be played in Florida or more likely Arizona, where spring training parks are more concentrated. But the logistics of quarantining 30 teams in one area would be extremely complex and potentially controversial, sources say, requiring local, state and federal government cooperation and resources that might be necessary to fight the coronavirus pandemic.

Baseball is a secondary concern at a time when thousands in the U.S. are dying from COVID-19. The possibility of the sport returning this summer in stadiums open to fans appears increasingly remote. But if the season could be played safely in empty parks, without disrupting efforts to save lives, the sport could play a restorative role for the country, as it did during World War II and after 9/11.  [The Athletic]