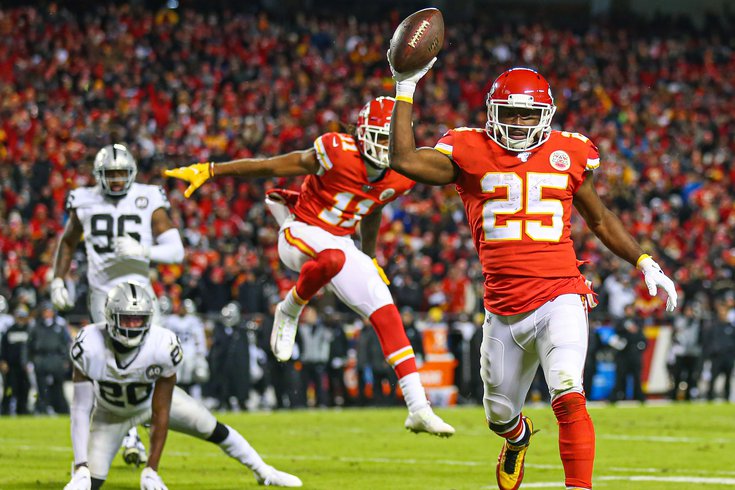 If you thought NFL free agency was over, think again. For the second time this week, the rumor mill is churning as the Eagles continue to look for a veteran running back to add to a group of young backs that includes Miles Sanders, Boston Scott, Corey Clement and others.

On Monday, a report emerged that the Eagles are showing interest in free agent rusher Carlos Hyde, who is coming off one of his best seasons at age 29 and could be just the type of back — size and skill — that Doug Pederson is looking for to fill out his depth chart.

And while signings at this time of year are typically smaller moves, there are still several big-name free agents on the market — and as the Eagles have shown in the not-so-distant past, finding the right pieces can make a big difference, no matter when they sign (see: Blount, LeGarrette).

In addition to Hyde, the two other top running backs on the open market are all-time Eagles leading rusher LeSean McCoy and former Falcons back Devonta Freeman. And according to Mike Garafolo of NFL Network, the Birds are interested in both.

“I look at the names that are still out there, I think the running back market provides some of the sexiest names. Some of the names that folks would recognize, certainly at a skill position. I’m looking at Devonta Freeman still out there, Carlos Hyde still out there, LeSean McCoy still out there. And speaking of McCoy, the former Eagle, I mentioned that he was a possibility perhaps to go back to Philly. And I’d still say that that’s the case because I do believe the Eagles are going to add a veteran running back here in the near future. […] And, yeah, they’ve been in on Hyde. They were in on Freeman, as well. We’ll see what happens with Freeman here in the near future. But I would look for the Eagles to add a veteran running back, someone that’s willing to get back Miles Sanders and understand that he’s the No. 2 back there.”  [h/t Bleeding Green Nation]

Last year Freeman had one of his worst seasons as a rusher, finishing with just 656 yards on 184 carries (3.6 yards per carry) and two touchdowns. However, he remained a dangerous threat as a receiver out of the backfield, hauling in 59 receptions for 410 yards (6.9 yards per reception) and four touchdowns. So, when you look at his total numbers — 243 touches for 1,066 yards and six touchdowns — it looks considerably better. Still, while he brings a versatility the Eagles covet in their players, he's also undersized at just 5-foot-8 and 206 pounds, and given what the Eagles already have at the position (smaller, versatile running backs) and what they are lacking (a bigger, bruising rusher), they might be best suited looking elsewhere.

McCoy, who would bring some of those same size concerns along with worries about his age and ability to stay healthy, won a Super Bowl with the Chiefs, even though he was inactive for the big game, and finished the season with just over 100 carries. However, as he said on Good Morning Football on Wednesday, he has his sights set on one more season in the NFL.

Last year, after being released by the Bills, McCoy said he didn't have enough time to test the market and find the right team, so instead opted for a familiar face in Andy Reid. This time around, he's had several months to evaluate his options, and isn't ruling out a possible return to Philadelphia.

"The difference between now and before -- when I went to Kansas City -- I kind of can control it," McCoy explained. "Earlier, I didn't have enough time to pick the right team, the right situation. When I got released, it was so quick, I had so many teams coming at me, I didn't know where to go. ... Now, like I've turned some teams down depending on the styles, who they have there, are we winning? I went to the Super Bowl (with) Patrick Mahomes, now I can't just go to any team. I'm just waiting, I've been talking to teams and I'll make the right decision."

Philadelphia could be a place to where McCoy could return as a capper to an illustrious career. He knows Miles Sanders is the next star runner in midnight green and black, but he thinks he could provide some wisdom to the young buck and help with his development in a place with which McCoy is intimately familiar.

"I could see that. On another note, since I left, you haven't seen the 25 active in green, so you never know," McCoy said with a bit of a smirk on his face. "I'ma keep my options open, though. I could see myself there in Philly. Like I said, that's home, so you never know."  [nfl.com]

This, of course, isn't the first time McCoy has hinted at reuniting with his old team. Earlier this offseason, he and wide receiver DeSean Jackson talked about it being time the two played together again when McCoy posted "PHILADELPHIA=home ❤️❤️" on Instagram. And shortly after that, he hinted that he wanted to join a team where he could help a young running back (like Miles Sanders, perhaps) learn and grown.

But no matter how badly McCoy wants to return, there are some things working against him. For starters, he will be 32 by the time training camps open in July (if they open at all). In recent years, the Harrisburg native has seen his production trail off as he's found it harder to stay on the field. Over the last two seasons, McCoy has fewer than 1,000 rushing yards combined after finishing six of his previous eight seasons with over 1,000 yards each.

That, however, had more to do with the veteran back taking on a lesser role, and in Kansas City, Shady looked slightly more like his old self. In 2019, he averaged 4.6 yards per rush (on 101 carries) in a shared role, his highest average since 2016, and finished with 646 yards from scrimmage and five touchdowns.

So, for the Eagles, what it really comes down to this: What exactly are they looking for in a veteran running back? And is his asking price reflective of the role you need him to fill?

If that answer to that first question is something like 100 carries and the ability to spell Sanders in spots, then he might be your guy. And if he's asking for, let's say, a one-year contract that's fitting for an aging backup running back or perhaps even a hometown discount — and not asking to be paid based on his past accomplishments in Philadelphia — then he's definitely worth a look for the Eagles.

But if the Eagles are looking for someone who can handle a bit more work, they might be better suited going after a guy like Hyde, who has less wear on his tires and is coming off a 1,000 yard season.

Still, it's nice to know the Birds have options.