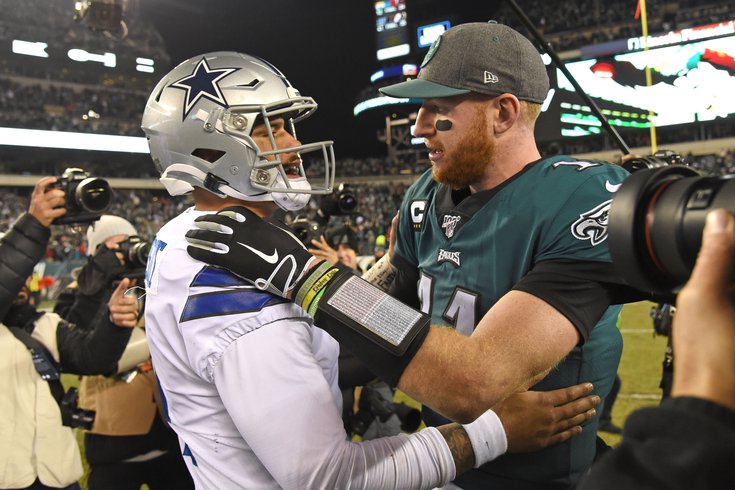 Put some masks on!

At this point in the offseason, NFL rosters are pretty much set, at least in terms of players expected to make any kind of reasonable impact. And so, let's take a look at the NFC East, and determine who has the best players at each position. We'll start with the offense.

Dak Prescott has slightly better stats and he's more durable, but if we're looking at their actual talents, and if we're taking into consideration what each player has been able to do with their respective supporting casts, Wentz is is the quarterback who gives you a better chance at winning a Super Bowl.

A year ago, Barkley felt like a clear choice over Ezekiel Elliott, but it was a tougher decision this year. I landed back on Barkley because he's a more talented receiver, but also, as runners, while Elliott had more rushing yardage, he also has advantages that Barkley does not. For example, Elliott had 2.3 yards before contact per rushing attempt in 2019, per pro-football-reference.com, while Barkley had 1.8. That is a significant difference.

Elliott is also inching closer to the eventual over-usage running back cliff.

Cooper and Gallup both topped 1100 yards in 2019, while McLaurin burst onto the scene as a rookie as a potent deep threat.

Ask who the best offensive tackle in the division is, and most will say Smith. In my view, it's pretty clearly Johnson. Smith is still among the best tackles in the league, but he is heading into his 10th NFL season, and while he is still only 29 years old, his play has slipped a bit. Still, he's the obvious choice alongside Johnson.

There are three great guards in the division -- Martin, Brooks, and Brandon Scherff -- and they all play RG, so it would be silly to include a lesser player because he plays LG. Scherff is on the outside looking in because he has missed significant time in each of the last two seasons.

Kelce is the best center in the NFL, and now that Travis Frederick has retired, there isn't a center in the division that's remotely close.