Eagles mailbag: How many NFL quarterbacks would you take over Carson Wentz? 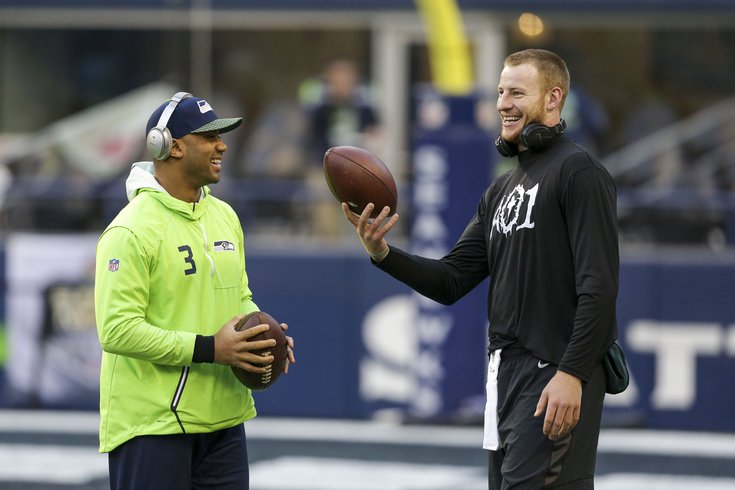 Question from Mike G: How many quarterbacks in the NFL would you take over Carson Wentz?

Just for 2020, I'd take the following quarterbacks over Wentz:

I think it's really close between Wentz and Watson. Call that one a toss up. So he's either my sixth- or seventh-best quarterback, right now, in the NFL.

If we're talking long-term, you can go ahead and take Rodgers and Brees off of the above list. But there are interesting debates between Wentz-Watson, and Wentz-Jackson.

So from the long-term perspective, I'd have Wentz as the fourth-most appealing quarterback in the NFL, behind Mahomes, Russ, and Lamar.

Question from deltaVee: The Eagles’ offensive roster turnover is pretty low. That should be an advantage at least early on, no?

The Eagles have a significant advantage in 2020, in my opinion, because the coaching staff (at the top spots, anyway) is returning for its fifth season, while each of the three teams in the NFC East have new head coaches.

I hadn’t considered roster turnover into that equation, but yes, while I believe the Eagles needed to do more this offseason to help Carson Wentz, the Eagles’ continuity on the offensive side of the ball, in theory, should require less time getting back on the same page. And of course, cohesion is advantageous on both sides of the ball, but it is achieved more slowly on offense.

Question from PhillyRob: Jimmy, now that the draft is done and FA is largely complete, which moves would the Birds not have been able to make had they re-signed Malcolm Jenkins?

They didn’t have to re-sign him. He was already on the team. They cut him! But to answer your question, obviously there’s nothing they did this offseason that they couldn’t do if they kept Jenkins. Maybe Mills stays at CB, Avonte Maddox is the slot, and they don’t sign Nickell Robey-Coleman? That’s the alternate Universe I would envision if they had just kept Jenkins.

Question from Josh: Has there been any discussion about Fletcher Cox’s massive cap number this year and next? I think his cap number is top 10 in the league, and he under-performed last year.

Cox had surgery last offseason, and didn’t really participate at all during training camp or the preseason games in 2019. I do think there’s reason to believe a fully healthy Cox will be back to form in 2020, especially with a loaded DT rotation that will allow Jim Schwartz to be more judicious about his usage, keeping him fresh for the full season.

If you’re insinuating that Cox should take a pay cut, why would he? There’s zero risk of the team releasing him, so there’s no incentive for Cox to take less. I do believe that he is a prime candidate for a contract restructure, in which they convert some of his salary into a signing bonus, and stretch his cap numbers into future years.

Question from Bird Gang: We hear that much of the rookie class's contributions in 2020 will be on special teams. With the disappearance of many returns due to recent rule changes, hasn't special teams value been substantially decreased?

Kickoff returns in particular have decreased substantially, so yes, guys who also play on special teams are somewhat less valuable than they were, say, 10 years ago.

However, the Eagles didn’t draft Davion Taylor in the third round, for example, because he projects as an immediate special teams contributor. They took him because they like his athletic traits and they believe he can become a starter in the regular defense. Because he can get down the field quickly and make tackles on special teams, that’s a small bonus.

(As a side point, again, I do agree with the point that special teams aren’t as important as they once were, but it is worth noting that the Eagles probably would have beaten the Lions last year without the Lions’ kick return TD.)

Question from Cthulhu: If I am Jalen Hurts should I be happy or mad I was drafted by the Eagles?

If I were Hurts, I would have much rather been drafted by a team that offers a clearer path to starting. I’d have preferred to have been taken by any of the following teams: Steelers, Colts, Jaguars, Titans, Broncos, Raiders, Bears, Lions, Falcons, Panthers, or Buccaneers.

Question from Ross: Your analysis of TJ Edwards was shined a light on how solid he was in limited time last year. It makes me feel a little better about our linebackers. Any chance you'll take a closer look at Gerry as well?

Thanks! I hadn’t planned on looking at Gerry, because he started most of the season, but he’s been a common request, so I’ll add him to the list.

I’ll give the nod to Oscar Meyer, because of their ziplock packaging.