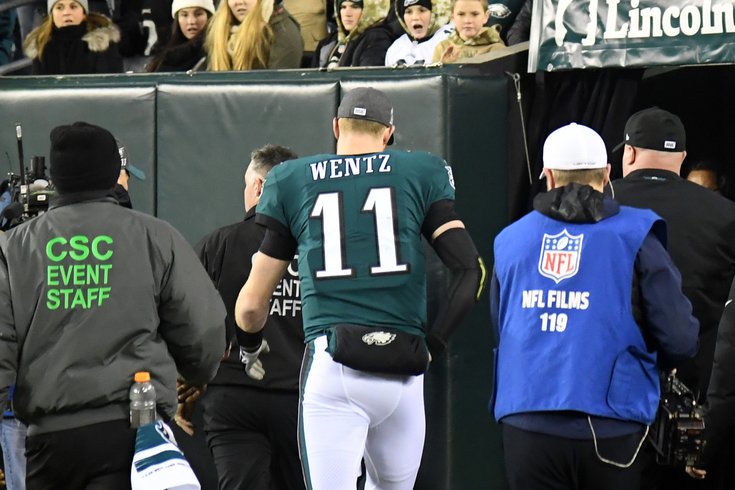 Below are the 10 players the Eagles can least afford to lose to injury in 2020. Obviously, some of the below choices are the Eagles' best players, but we tried to also consider their importance to the scheme, depth behind them, long-term vs short-term effects, and other factors.

Anyone who follows the Eagles closely already mentally has Jackson appearing on the injury report in some form by Week 3, but the reality is that the Eagles need Jackson to be a reliable starter for them this season.

Had they signed a competent receiver in free agency, it might not be as crucial for Jackson to stay healthy and consistently produce for the Eagles, but here we are. If Jackson goes down, what is the Eagles' starting lineup? Jalen Reagor, J.J. Arcega-Whiteside, and Greg Ward?

The Eagles desperately need Reagor to be a draft hit, and to show that he has solidified at least one starting receiver spot for the foreseeable future. He can't do that if he goes down, obviously.

Brooks is one of the best guards in football, and his loss was felt in the playoffs in each of the last two seasons.

Yes, Dallas Goedert is already a good starting tight end, but Ertz is Wentz's go-to guy, and by far the Eagles' most consistent, reliable target in the passing game.

For the first time since Doug Pederson took over as the head coach, the Eagles have a play-making, three-down running back in Sanders.

As a rookie, Sanders rushed 179 times for 818 yards (4.6 YPC) and 3 TDs, while also chipping in 50 receptions for 509 yards and 3 TDs. He was especially effective during the Eagles' stretch run, stacking quality performances against Washington, the Cowboys, and the Giants to help the Eagles win the NFC East.

In the four games before Sanders got hurt against the Giants Week 17, he averaged 23 touches per game. While I wouldn't project that kind of Christian McCaffrey-esque usage for Sanders over an entire season, it does show that Pederson began to really lean on him when he needed a skill position player to step up.

Boston Scott could be a nice backup, but Sanders has a chance to be great. The feeling here is that Sanders is going to shoulder a substantially bigger role in his second year in the league, and there isn't a down/distance in which he's a liability.

Slay is the Eagles only experienced, starting-caliber outside corner, unless we're counting Jalen Mills, who the team moved to safety. Should Slay go down, the Eagles would be forced to either roll with Sidney Jones or Rasul Douglas on the outside (we've seen what that looks like), or move Mills back to corner.

In other words, they'd be right back where they were a year ago, when opposing receivers torched the Eagles' secondary routinely for big plays.

Cox is still very clearly the best player on the Eagles' defense, but the team at least now has a pair of starting DTs in Javon Hargrave and Malik Jackson, should he go down.

Kelce has been named first-team All-Pro in each of the last three seasons. If the Eagles tried to slot one of their bench players in to replace him, they'd be choosing from a menu consisting of Nate Herbig, Jack Driscoll, or Luke Juriga. They could also slide Isaac Seumalo over to center from his LG spot, which would cause a shakeup of OL continuity, and weaken two spots on the OL instead of one.

With the LT position still unsettled, losing Johnson, who is in our view the best RT in the NFL, could be potentially devastating, leaving the Eagles vulnerable at both tackle spots.

With safety net Halapoulivaati Vaitai gone, the Eagles would be forced to play an unproven player at RT.

Wentz had seemingly put some of his injury concerns to bed during the 2019 season, until Jadeveon Clowney speared him in the head in the playoffs, causing a concussion and ending the Eagles' playoff run before it ever got started.

So the injury talk is back.

Still, Wentz is one of the 5-10 best quarterbacks in the NFL, at a minimum, and clearly remains the most important player on the team, even with the odd selection of Jalen Hurts in the second round.