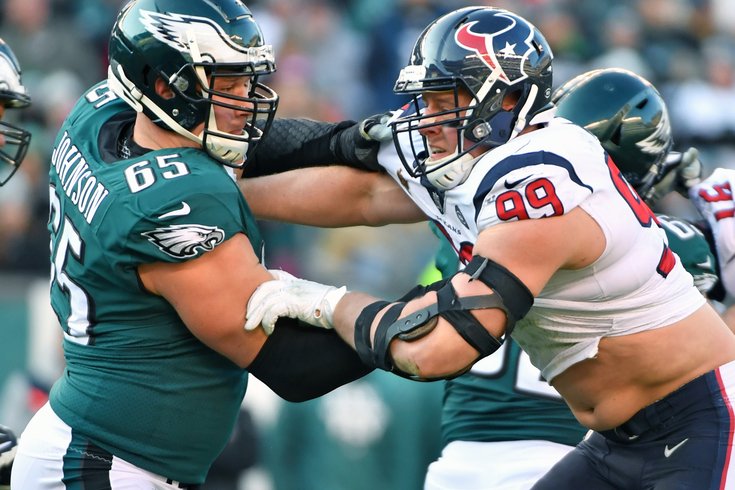 Lane Johnson faces stud pass rusher just about every week, and almost always shuts them down.

Below are the 10 players the Eagles can least afford to lose to injury in 2019. Obviously, some of the below choices are the Eagles' best players, but we tried to also consider their importance to the scheme, depth behind them, long-term vs short term effects, and other factors.

A couple weeks before the draft, Jason Kelce told reporter that the Eagles were an injured right guard away from getting back to the NFC Championship Game. That's what his teammates think of Brandon Brooks. Brooks has (deservedly) made each of the last two Pro Bowls, and is among the best guards in the league.

He may not be ready for the start of the season, but as long as he recovers fully from his torn Achilles, if he is healthy for the stretch run, the Eagles should have an elite offensive line in front of Carson Wentz. Without Brooks, the Eagles will be starting either Stefen Wisniewski or Halapoulivaati Vaitai at right guard.

Hot take? Maybe. I don't care. I think DeSean Jackson is going to be an impact player for the Eagles, both as a deep threat, and as a player who opens up opportunities underneath for Zach Ertz, Alshon Jeffery, Nelson Agholor, and Dallas Goedert. He's also going to make it easier on the run game, and, you know, Carson Wentz.

Ertz broke the single-season receptions mark for tight ends in 2018, so why is he only eighth in this list? Well, his backup, second-year pro Dallas Goedert is already very good, and the Eagles are loaded with other weapons in the passing game as it is.

While his stats aren't as good as some more recognizable pass rushers around the league nationally, Graham is still is a complete defensive end, and not just a pass rush specialist. He finally got paid this offseason, and the Eagles need him to live up to his contract, especially given the Eagles' depth concerns at DE.

As a follow-up to an encouraging rookie season in which he made huge plays in big moments, Barnett was "lights out" to start the 2018 season, according to Doug Pederson, a sentiment with which I agree. The Eagles need Barnett to make the third-year leap in 2019, and become a highly productive edge rusher for a full season. The ability is there, and if Barnett can solidify himself as a core player in 2019, that would be huge for the Eagles' defense, long-term.

Anyway, Kelce is the best center in the NFL, and the dropoff from him to Wisniewski would be substantial. It's also worth noting that Kelce's presence has added importance this season because Brandon Brooks may not yet be fully recovered from his torn Achilles when the season begins.

The five corners on the roster at the start of the season in 2018 -- Jalen Mills, Ronald Darby, Sidney Jones, Rasul Douglas, and Avonte Maddox -- missed a combined 35 games. On top of that, Rodney McLeod, and his replacement, Corey Graham, missed a combined 18 games. The lone constant was Jenkins, who held the secondary together while playing with guys brought in off the street.

Jenkins can do it all. He plays in the slot, deep middle, linebacker, and outside corner. There isn't a more versatile, movable piece in the Eagles' defense. Despite entering his 11th season in the league, Jenkins remains fast, tough, and physical. His absence from OTAs, seemingly because he is unhappy with his current contract, is a situation to watch closely.

The Eagles have outstanding offensive tackle depth, but the next guy up at RT if Johnson were to go down is Vaitai, as the Eagles are unlikely to cross-train Andre Dillard at RT, as he is the LT of the future. Vaitai is a capable swing tackle, but clearly a significant downgrade from Johnson, who in my view is clearly the best RT in the game and probably a top three offensive tackle overall. Since 2016, the Eagles are 30-11 in games in which Johnson has played. They are 3-9 when he doesn't.

Cox had his best statistical season as a pro in 2018, when he racked up 10.5 sacks, 46 tackles (10 for loss), and an extremely impressive 34 hits on the quarterback, despite being the focus of opposing offenses' game plans. For his efforts, he earned First-Team All Pro honors for the first time, as well as his fourth consecutive trip to the Pro Bowl.

Cox isn't often discussed as a Hall of Fame candidate, but if he continues to string together seasons like the one he had in 2018, he'll be in Canton.

The Eagles have good depth at DT, but there's little question that Cox is the player that makes it all work when he's playing at a high level.

There is no question at all about Wentz's immense talent. If healthy, he can be an MVP candidate, like he was in 2017. But after having his last two seasons cut short by injury, Wentz needs to be on the field in January (and maybe February).

He remains the most important person in the franchise, and a full, healthy season would help put some of the injury concerns surrounding him to bed.