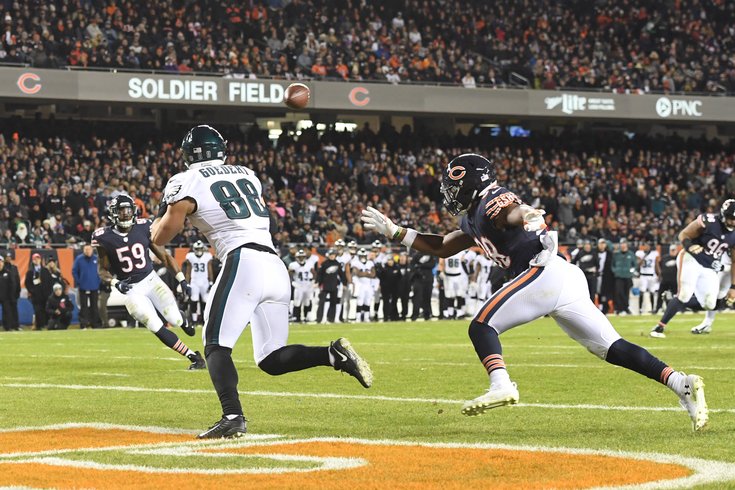 Dallas Goedert has the chance to be great tight end in the NFL.

After his first two seasons in the NFL, most Philadelphia Eagles fans would have fired Nelson Agholor into the sun, if given the chance. In 2017, he became one of the best slot receivers in the NFL*, catching 62 passes for 768 yards and 8 TDs, while helping the Eagles win a Super Bowl.

In 2018, Isaac Seumalo became a competent starting LG a year after getting benched, and quickly at that, during the 2017 season.

In 2019, who will be the Eagles player who brings his game to the next level? Here are five breakout candidates, though they may not necessarily be coming off sucky seasons like Agholor and Seumalo did:

As we noted early in April, when the Eagles traded Michael Bennett this offseason, most observers rightfully pointed out that Bennett was the team's most productive edge rusher in 2018, as he had nine sacks, 15 tackles for loss, and an impressive 30 hits on the quarterback. With Barnett coming back as the starter at RDE in 2019, many consider that to be a downgrade from Bennett.

I couldn't possibly disagree more. In Barnett's first four games, when he was healthy, he was a very disruptive player. If you take Barnett's pass rushing numbers during those first four games and extrapolate them over a 16-game season, they would have been better than Bennett's:

Add in that Barnett is also a better run defender (or at least less likely to freelance), and I'll take him as my starter all day over Bennett.

In that sense, to me, Barnett is more of a "continue to break out candidate" than he is a "breakout candidate." Barnett missed the Eagles' first OTA session, as he continues to rehab from surgery on his rotator cuff, but the normal time frame for recovery from that procedure should allow him to be ready to go for training camp.

He is already a good player, and he'll show that over the course of a full season.

Goedert has the chance to be a really, really good player in this league. It was obvious way back in training camp last year that Goedert could play, and while his numbers (33-334-4) certainly weren't eye-popping because he didn't play as much as he should have, Goedert proved in his rookie season that he can get open and catch the football. However, the true pleasant surprise about Goedert's rookie season was his ability as a blocker, something he was not asked to do much of as the No. 1 passing game target at little South Dakota State.

There were no obvious holes in Goedert's game, a rare thing to say about a rookie tight end, and he would already easily be a top half of the league starter on a team that didn't also employ Zach Ertz.

In 2019, while Goedert's snaps did increase as the year went on, he only played 48 percent of the snaps as a rookie. That has to increase significantly in Year 2. If it does, as expected, there's little question that Goedert can have an impact. On the first day of OTAs, Goedert was a beast.

After missing all but one game during something of a "redshirt" rookie season in 2017, Jones entered the 2018 season as the starting slot corner. Early in the season, he showed flashes of the player the Eagles thought they selected in the second round of the 2017 NFL Draft, particularly Week 3 against the Colts.

However, Jones battled through a hamstring injury, and was obviously still hurt when he was picked on by the Cowboys and Saints, before being sidelined the rest of the season.

Because the Eagles expended valuable resources on Jones, both in terms of a high draft pick and sacrificing his rookie season for long-term gains, many have soured on Jones, who has not yet produced any sort of return on investment. He is more of the Agholor-Seumalo breakout candidate variety than Barnett or Goedert above.

Jones is currently running with the first-team defense with Jalen Mills and Ronald Darby out. The opportunity to earn a starting job is right in front of him.

Douglas had sort of the reverse type of season from Jones, in that he started slow, but played well down the stretch. Like Jones, Douglas is currently getting first-team reps with Mills and Darby out. Douglas is also suddenly ripped, as he clearly put in the time in the weight room this offseason.

Entering his third year in the league, this should be the season it all comes together for Douglas. The question will be whether he earns an opportunity to play, even when his cornerback teammates are all healthy.

As a No. 2 in the NFL, Sudfeld, is good enough, smart enough, and he is extremely well-liked by his teammates. In that sense he's kind of like Stuart Smalley.

Of course, the Eagles would prefer that Sudfeld never sees the field in 2019, but the odds are that he will. If Sudfeld has to enter the field mid-game or even make a a few spot starts, he should be able to keep the Eagles' season afloat.