What they're saying: Latest on Eagles' running back search, why they're such a safe bet and more

The NFL offseason may already feel longer than usual, but the rumor mill never stops... 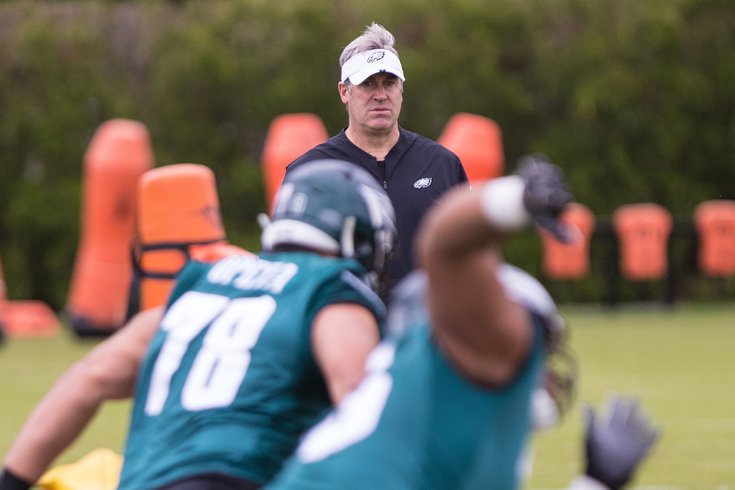 Welcome back to a mid-week edition of What They're Saying, where we'll catch you up on all the latest news and rumors surrounding the Philadelphia Eagles as the virtual offseason continues without any on-field action of which to speak — although there's at least some hope that could be changing in the coming weeks.

In the meantime, all NFL fans can do is wait and hope that there's football as usual this fall. That, and speculate about how good their favorite team is going to be before even taking the first practice snap of the season. But fans are the only ones left making paper predictions.

ESPN recently released their Football Power Index (FPI) rankings for the 2020 season — and offered up a bunch of predictions but none were Eagles-centric so we'll skip over them for now, except to mention that someone picked the Cowboys to win the Super Bowl.

Here's a quick look at what goes into this preseason FPI rankings:

FPI is our prediction model for the NFL. Preseason ratings are based on each team's Las Vegas win total; last season's performance on offense, defense and special teams; the number of returning starters; coaching staff changes; and starting and backup quarterbacks. [espn.com]

The Chiefs and Ravens ranked first and second, respectively, but then there's a run of NFC teams, showing just how difficult this season will be for the Eagles if they're unable to repeat as division champs. Here's a look at where the Birds rank and the company they'll likely keep this season:

Interestingly enough, the Tom Brady and the Bucs checked in one spot ahead of his former team in New England.

ESPN also had another interesting nugget in a story about the safest teams to bet on during the Super Bowl Era. The Eagles actually checked in quite high on that list, and have done better than expected against the spread over their last 800-plus games.

The Eagles have the second-best mark against the spread in the Super Bowl era. It is the city of underdogs, right? While Philadelphia has only one Lombardi trophy to its name, it has been a consistently competitive franchise over much of the past four-plus decades while avoiding long down streaks. Credit strong coaching for some of that. From Dick Vermeil to Andy Reid to Doug Pederson, the Eagles have found leaders who inspire loyalty and accountability among the players. Reid's tenure in particular stands out. The Eagles enjoyed eight double-digit-win seasons under him. -- Tim McManus  [espn.com]

That should be reassuring for all those Eagles fans who like wager on their favorite team every Sunday.

And now, let's take a look at some other news and rumors surrounding the Eagles, from their continued search for a veteran running back to their 14th-ranked wide receiver corps ... wait what? Let's dig in.

Apologies if you didn't get the Team America reference there.

Devonta Freeman is one of the two remaining veteran free agents that have been linked to the Eagles multiple times this offseason. And after Carlos Hyde signed with the Seahawks, a team Freeman previously had an offer from, the options for both sides are dwindling.

Recently, NFL Insider Ian Rapoport provided an update on the latest on Freeman, and why he might be even more of a fit for the Eagles now, at least financially speaking.

“[Freeman is the] same guy who’s also been a featured back and a highly paid one for the Atlanta Falcons. And he’s in a situation where a lot of veterans are right now, believing that they deserve more than is being offered. And you really have two options here. You can do what Carlos Hyde did and say, okay, he wanted more than $5 million per year. At this point, in May, not going to happen. Just take the best deal you can, move on, and try again next year. That’s what Hyde did. Freeman has not put that decision in front of himself right now, has not decided to do that. Still wants big money. Could he actually retire? Maybe? Probably more likely is at some point realize to take what he can get and a team like the Philadelphia Eagles — who would like to add a veteran running back, and wouldn’t like to pay a lot for it — would make a lot of sense. I also know they have Shady McCoy, one of their old friends, in their sights as well.”  [h/t bleedinggreennation.com]

As Brandon Gowton mentioned in the post linked above, Freeman turned down a $4 million dollar deal from the Seahawks, which is reportedly well north of what the Birds are looking to pay. According to Adam Caplan, the Eagles “aren’t looking to spend much more than the minimum.” And that would likely mean Freeman would have to be willing to take a lesser deal for one year and hope he can do better in free agency next season.

So while he may not be free, there's a chance the Eagles get Freeman for less than market value. And if he doesn't budge on that asking price, the Birds could try to go a different route...

While Freeman is the better player at this point in his career, LeSean McCoy may be the more realistic option for Philly, especially if the former is unwilling to compromise on his contract.

McCoy, like Freeman, has been linked to Philly several times this offseason, with one of the first hints that the franchise rushing leader might return to the Eagles coming during an exchange with DeSean Jackson on Instagram. Well, believe it or not, as has been the case so often this offseason, another mention of McCoy came up recently during a conversation between Jackson and Brandon Graham.

After talking with Graham for a bit, Jackson got on Instagram Live with actor and comedian Michael Blackson. Blackson asked Jackson about LeSean McCoy potentially returning and Jackson said: “We might get him back.” Jackson and McCoy previously hinted at a reunion in Philly earlier this offseason. The two former teammates also appeared on Instagram Live together during the first night of the 2020 NFL Draft. McCoy was wearing his old No. 25 Eagles jersey at the time and Jackson was talking about how Howie Roseman told him the Eagles were going to draft a speedy receiver. Sure enough, the Eagles selected Jalen Reagor at No. 21. Maybe Jackson should consider being an NFL insider after he retires.  [bleedinggreennation.com]

It really seems like DeSean wants a reunion in Philly this season.

Over at The Athletic, former colleague and Eagles beat writer Sheil Kapadia wrote one of the best things you'll read about the Birds all offseason. His in-depth look at the team — the first of 32 he'll do leading up to the season — is a must-read for anyone looking to learn more about the Eagles, their moves this offseason, how they'll impact the team in 2020, what went right/wrong in 2019 and much, much more.

The post is broken down into sections for offense and defense (and sub sections for run/pass), and each was capped off with a short synopsis. Here's a look at what Sheil thinks about the run and pass offense, respectively.

Bottom line: Overall, the run game is in good hands due to the scheme, blocking and personnel. It doesn’t need to be an elite unit but could easily rank in the top 10 in efficiency if Sanders stays healthy.

Bottom line: The Eagles used the “take a lot of swings” approach at wide receiver. If a couple connect, the passing offense could be prolific. If they don’t, it will probably look a lot like last year — and maybe even worse if the offensive line takes a step backward.  [theathletic.com]

That last part about the pass offense is a bit scary, but it's hard to argue.

Kapadia capped off his post with this best case/worst case look at the upcoming season, and it really shows just how different 2020 can play out depending on a few things breaking one way or the other.

The best-case scenario for the Eagles is that Reagor is an impact rookie, Jackson stays healthy and Wentz gets back to his 2017 form. The new coaches work well together, they take advantage of Wentz’s strengths and the Eagles produce one of the league’s most efficient offenses. Slay performs like a lockdown corner, the defensive line dominates, and the Eagles make a Super Bowl run.

The worst-case scenario involves Reagor struggling to produce as a rookie and Jackson struggling to stay healthy. The offensive line declines, the Eagles suffer from too many cooks in the kitchen on the coaching staff and never find an identity. Maybe Wentz misses a few games and Hurts comes in and doesn’t look like he’s anywhere near ready to contribute. Defensively, Slay shows signs of decline, the Eagles really miss Jenkins, and Hargrave doesn’t prove to be much of a difference-maker as a pass rusher. That scenario would leave the Eagles out of the playoffs and facing an offseason of change in 2021.  [theathletic.com]

Let's hope it's the former.

You should definitely go check out Sheil's full story, which is overflowing with stats and more that will not only inform but surprise you as well, and I guarantee you'll be a smarter fan after you finish. After all, there's a reason it's called "A football nerd's guide to the Philadelphia Eagles' 2020 season."

They're ranked how high?

When I first saw this ranking of the top receiving corps, I did a quadruple take. But then after reading it I realized that they're also including tight ends in this, which given the talent the Eagles have there makes this a bit less surprising. Still, there are so many questions surrounding the Eagles wideouts this season that I find it hard to believe having the best TE duo in the game is enough to pull them into the top half of the league.

The Eagles’ receiving corps is one of the more interesting ones in the league heading into next season. No one really knows what to expect from Alshon Jeffery after a year in which he struggled with injuries, nor do they know what Desean Jackson has left, given that he has battled injuries over the last couple of seasons but remains electric when on the field. J.J. Arcega-Whiteside needs to show considerable improvement over the non-existent display he put together as a rookie, notching well under one receiving yard per route run on the year. There is talent in that group, though, along with first-round selection Jalen Reagor and their two tight ends, Zach Ertz and Dallas Goedert. Health will be the key to not repeating the disappointment of last season.  [pff.com]

Then again, maybe we shouldn't put too much stock in this after PFF declared last offseason that the Eagles had the top receiving unit in the NFL, and we all know how that turned out.