The Eagles' receivers are extremely nonthreatening 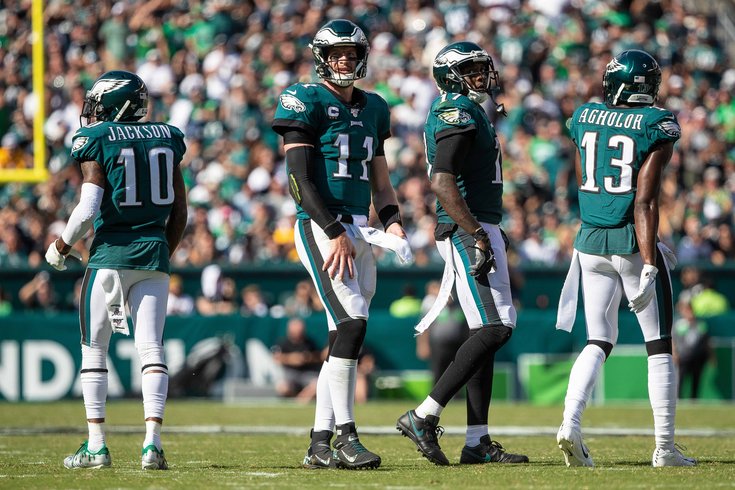 With DeSean Jackson out, Carson Wentz has gotten no help from his other wide receivers.

Remember that time the Philadelphia Eagles were down 17-0 to Washington, and in the blink of an eye they quickly had a lead, mainly due to a pair of 50-plus yard TD bombs from Carson Wentz to DeSean Jackson? Ah, memories.

Compared to the rest of the league, the Eagles' healthy receivers have the worst yards per target average in the NFL:

Yep, remember that completely impotent Jets offense that didn't look like it could move the ball against you and your out-of-shape friends who play once a year on Thanksgiving? Their receivers have a better yards per target average than the Eagles' receivers, as currently constructed.

Agholor actually does OK here, as he is getting a respectable 3.7 yards of separation on average, except, you know, the next category...

The Eagles lead the league in drops, according to this site, with 11. Drops are of course a subjective stat, and I reject the notion that the Eagles only have 11 of them. But obviously, nobody needs an official stat on that to know they have struggled mightily to catch the football this season.

The most devastating examples this season were:

If the Eagles make those three plays their yards per target numbers would look a whole lot better, obviously.

Yards after the catch

Eagles receivers have been bad in this metric this season.

All 3 of them are averaging fewer than 5 yards after the catch.

The worst example of missing out on yards after the catch was Jeffery's inability to stay in bounds and run down the field for a touchdown on a perfectly placed ball by Wentz against the Vikings that would have tied the score and given the Eagles momentum.

At this point it's just silly. Carson gotta run it in for 'em too. Would've tied the game 24-24 had Jeffery ran in a straight line. pic.twitter.com/6RLvhpCOJM

There isn't a stat for this, but I'll pose this question to the readers — How many difficult catches have the wide receivers made this season that you shouldn't reasonably expect them to make? In other words, how many times has an Eagles receiver made a play for his quarterback?

Wentz constantly has to throw into tight windows to complete passes. When he connects on them, his receivers aren't getting suitable yards after the catch. When he doesn't connect, it's often because his receivers are dropping those passes, or somehow misjudging them.

Because opposing defenses know that the Eagles' receivers can't beat them down the field, corners aren't giving them much in the way of cushions, thus limiting the number of quick, easy throws Wentz has at his disposal. Meanwhile, linebackers and safeties are crowding the short-to-intermediate parts of the field, creating those tight windows as well as a lack of a room to run after the catch.

As a result, the run game has suffered, and guys like Zach Ertz and Dallas Goedert aren't finding much in the way of room to operate in the middle of the field,. The only big plays the Eagles seem to be getting are when they able to catch opposing defenses in man coverage and Miles Sanders is beating linebackers down the field. And oh, guess what — after looking at the film, defenses will surely be taking that away now.

The Eagles' lack of speed on the outside is glaring, and their offense is (a) ineffective, and (b) incredibly boring without the threat of someone taking the top off the defense.

The Eagles' corners haven't been good, but they aren't the biggest problem on this team. It's the receivers.