Five reasons the Eagles are NOT a playoff team (right now) 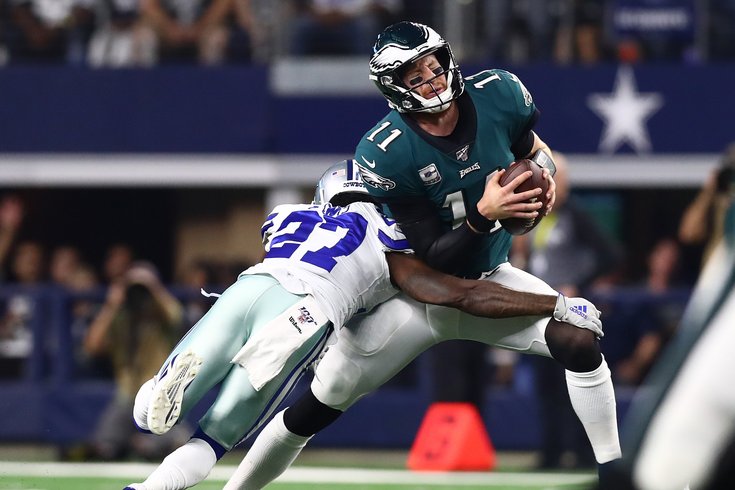 Carson Wentz didn't have much help in Sunday's Week 7 loss in Dallas.

If you watched Sunday Night's 37-10 mauling by the Cowboys over the Eagles, you're probably wondering how we narrowed it down to just five reasons.

The Eagles have not only been losers the last two weeks, they've been outscored 75-30 and have been almost unwatchable as they have fallen to 3-4 on the year and out of the playoff race (for the time being).

Yes, we are well aware that the Eagles made the postseason last year after similarly starting 3-4 — in fact they were actually 4-6 before rallying to improbably win a Wild Card spot. But this year, things look at lot different. For the time being, the two Wild Card teams in the NFC each have 5-2 records (the Vikings and Seahawks) and Philly is slotted 11th of 16 NFC teams. It looks like winning the NFC East is probably their best bet, and teams with a 3-4 record make the playoffs just 14 percent of the time.

In addition to the numbers game working against them, we have singled out five other unavoidable reasons the Eagles do not resemble anything close to a playoff team right now:

1) They start slow — almost every week

After seeing the Birds cough up two fumbles, leading to 14 Dallas points to start Sunday night's massacre, it was tweeted everywhere — and noted by Al Michaels on the NBC broadcast that Week 7 marked the sixth time in seven games that the Eagles trailed by double digits this season.

They were able to comeback to beat the Redskins and Packers, but the other four times they learned that spotting the opponent a two score advantage may not be a winning strategy.

Philly averages 4.4 points per first quarter, but if you take away the 14 they scored in the first against the Jets, it's just 2.8 points per first. Doug Pederson tried taking the ball instead of deferring last week — and that clearly didn't work. He'll need to try something totally different to get the offense moving next week against one of the NFL's top defenses in Buffalo.

2) They can't find answers in the secondary

This one isn't entirely the fault of anyone on the team (though the individual performances of Ronald Darby, Rasul Douglas and Sidney Jones leave a lot to be desired), but the Eagles have been decimated by injuries and inconsistency in their secondary. Seven different cornerbacks have lined up in the secondary through seven games and no combination has been able to spell opposing star receivers. Here's a nugget from Jimmy Kempski's 10 awards last night:

Another game, another opposing receiver torches the Eagles' corners:

Oof. If the Eagles are still determined to content (which is no longer a foregone conclusion), they must trade for a cornerback.

The Eagles lead the entire NFL with 11 dropped passes this season and even that number might be generous. Not only do the Eagles' pass catchers have butterfingers week in and week out, they also are doing a terrible job of getting open, making things as difficult as possible for Wentz, who can regularly be seen either throwing perfect passes that are not caught, or is forced to thread the ball through nearly impossible windows.

And then there are plays like this, when it looks like his wide receivers just don't want to catch the ball.

Not long ago, Wentz was among the top rated quarterbacks this season according to Pro Football Focus. Hampering things has been inconsistent protection, with 38 QB hits allowed by the offensive line and countless more pressures that have forced Wentz to improvise. He's shown flashes of greatness when he's been able to — but it's hard to lead a team that isn't giving you any help with the ball in your hands.

4) They have no true strengths

The Eagles do technically still have one of the best third down offenses in football — fifth best in fact. They also, technically again, still have a very good red zone TD rate (11th best) and rushing defense (6th best), but those are kind of misleadingly high, as each has obviously either gotten worse (the Cowboys ran for 189 yards) in recent weeks.

Here's a look at how the Eagles rank in some key categories amongst the 32 NFL teams.

Mediocre at best. A playoff team, you would surmise, should be proficient in a at least few of these categories. Yes, of course, stats are not everything, but the Eagles are not passing the eye test and they certainly are not generating results worthy of inspiring the confidence of fans.

5) They're not getting any younger

The Eagles are the second oldest team in the NFL this year, and as Kyle Neubeck pointed out Sunday night, it's starting to show, and show in a big bad way.

As currently constructed, the Eagles are old and not good. You can be one of those things in a given season, but being both is a death sentence in any sport. There's no reason to believe growth is coming, and in fact, the opposite is probably true. The Eagles probably need picks and the hope of building a sustainable future around Wentz more than they need help this year.

The age issue is rearing it's head in two key places. First, the team just looks slow. On defense, they are getting burned down the field and their ankles broken when trying to make tackles. Old generally equals slow. Second, the injuries are starting to pile up. Old generally also equals injury prone.

Jason Peters didn't suit up Sunday: he's 37. Neither did DeSean Jackson: he's 32. The absence of both had an undeniable effect on the team's performance against the Cowboys. And if you think this is the end of the injury concerns for the Eagles, you are quite mistaken — it's not even Week 8 yet.

With plenty of time to turn it around, it will be interesting to see if things remain the same with the Bills (5-1), Patriots (6-0) and Seahawks (5-1) ahead as three of the Eagles' next four opponents.

Bonus: They have locker room issues, it seems...

Anonymous sources and late to practices and meetings? Oh boy...