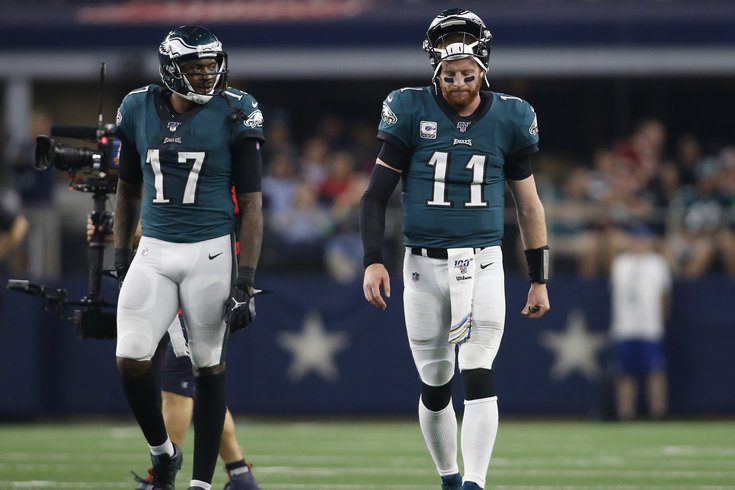 Philadelphia Eagles quarterback Carson Wentz (11) reacts to a play during a timeout in the game against the Dallas Cowboys at AT&T Stadium.

The Eagles got manhandled by the Dallas Cowboys on Sunday Night Football, and their 37-10X loss is a game that feels like it will linger in the minds of Philadelphians for quite a while. This is a team in the middle of a crisis, and there are no surefire paths to safety from here.

Here's what I saw and thought while watching an absolute massacre.

• What, you were expecting me to have something nice to say here?

Okay fine, I give in. Jalen Mills made a heck of a play to come down with an interception in the fourth quarter, even if it was the football equivalent of the sixth man on an NBA team hitting a pair of threes to cut a lead down to 24 with eight minutes to play.

.@greengoblin comes up with the pick in his first game back!#PHIvsDAL | #FlyEaglesFly pic.twitter.com/tyv1h6FjLV

That's all you're getting from me.

• There is not a single thing the Eagles do well right now. They don't get after quarterbacks, they don't blanket guys in the secondary, they don't throw the ball down the field well, they don't have a reliable rushing attack, their special teams are erratic, their coaching decisions are baffling.

It's an organizational problem, not one you can pin on any one player or unit or coach. Howie Roseman hasn't done a good enough job identifying talent. Doug Pederson isn't getting it done when he's structuring gameplans. Carson Wentz, far down the list of problems though he may be, is not showing the pocket awareness of a guy who deserves to be paid mega millions for years to come.

One of the things we've heard and/or said about this team for years is that they have a strong culture and can band together in moments of adversity. That idea is about to be put to the test big time. They're sputtering right now after getting punched in the mouth in back-to-back weeks, and the tough part of their schedule still isn't over. Philadelphia's leaders have a tall task in front of them, and even if they manage to keep the locker room together, I'm not sure that'll be enough to offset being too slow, too unprepared, and too mistake-prone.

• The talk over the past week has been about whether the Eagles made a mistake not ponying up for cornerback Jalen Ramsey, and coming into Sunday, I think there were still a lot of fans who believed a trade for an impact player could still be in the cards this season. I wouldn't rule that out entirely, but I would argue we have more evidence that the Eagles should go the other way and see if they can get some value by making some of their veterans available.

As currently constructed, the Eagles are old and not good. You can be one of those things in a given season, but being both is a death sentence in any sport. There's no reason to believe growth is coming, and in fact, the opposite is probably true. The Eagles probably need picks and the hope of building a sustainable future around Wentz more than they need help this year.

Of course, you can get into the conversation of whether you trust this front office to nail those picks. But past failure in the draft doesn't mean you can ignore the direction the team and organization are heading. Standing pat would be defensible too, but they can't treat their current form like an aberration. This may just be who they are.

• An underrated terrible part of this season has been the guys you expect to be reliable coming up just as small as their young and/or bad counterparts. Lane Johnson has been a pillar of consistency for years, and he got smoked off the edge for most of Sunday night's game. Zach Ertz was Mr. Reliable for Carson Wentz anytime they played together, and it took him until the middle of the third quarter of Sunday's game to even get on the stat sheet.

Throw Wentz in here too. He made a lot of avoidable mistakes against the Cowboys, including a fumbled snap, misreads on Cowboys blitzes, and an indefensible throw into triple coverage that Dallas picked off with ease. Eagles fans love to talk about how much better he is than Dak Prescott, and if you put them in neutral situations, I would go Wentz too, but he got absolutely thrashed by Prescott on national television. You can pretend that didn't happen, but the loss and the gap in their performances is there all the same.

The entire team is caught in the vortex of suck. There are no survivors.

• I think it's perfectly reasonable for Eagles fans to wish for more blitzes from their football team. A generation of fans grew up watching Jim Johnson throw waves of players at opponents, and the four-man rush is clearly not enough to get it done for this current group.

Unfortunately, blitzing is one of the many things Schwartz's men are terrible at. Opponents are rarely surprised by where the extra man (or men) are coming from, and they end up running into a wall before they can get to the quarterback, allowing teams to throw against single coverage almost every time.

Barring a come-to-Jesus moment in the middle of the season, deep into his career as a defensive coordinator in the NFL, I can't imagine this is going to change under his regime. They're damned if they do, damned if they don't.

• A lot of my scorn has been reserved for the defensive side of the ball, which admittedly has been terrible under Jim Schwartz this year. But there is no way Doug Pederson and the offense should come out of here unscathed, because in-game decision-making has been brutal, to say nothing of the poor preparation they've shown week in and week out.

The Eagles were caught with their pants down on Sunday. Pederson was thoroughly out coached by Jason Garrett, a guy who has nearly been fired multiple times and typically serves as nothing more than fodder for memes shared amongst Eagles fans. Excuse that however you want — blame the personnel, blame Philadelphia's health, blame whoever you want — but the fact remains that the Eagles keep getting abused to open games, a reflection of the prep work they're supposed to do to get ready for Sunday.

It has been a bad year for the coaching staff as a whole.

• I couldn't personally pick one guy who deserves to get the boot and take the blame for this whole thing, but this really feels like a team that could use a midseason shake-up to the coaching staff. If you believe it should be Schwartz for an underperforming defense, or you believe it should be Mike Groh for leading an underperforming offense, I wouldn't be able to blame you either way.

That's the sad thing about this team. There's not a person on staff you could name where you could say, "Actually, they've acquitted themselves well this year." One big dumpster fire.

• Rudy Ford is almost exclusively on the Eagles to make plays on special teams. He consistently embarrasses himself on special teams, including on Sunday night, when he picked up an obvious block-in-the-back penalty that wiped out what should have been a nice punt return from Boston Scott.

The team lacks discipline all the way down to the guys at the end of the roster.

I remember the days when WRs would lay out to make these catches pic.twitter.com/yzNKkwoMnK

I could build a case of why this team isn't digging out of this hole around just this play. Diving for a catch doesn't seem like a whole lot to ask of a guy who is looking to get paid in the offseason, or from anybody who plays wide receiver. This is far worse than any drop he has had or mistake he has made. This is just quitting on a play.