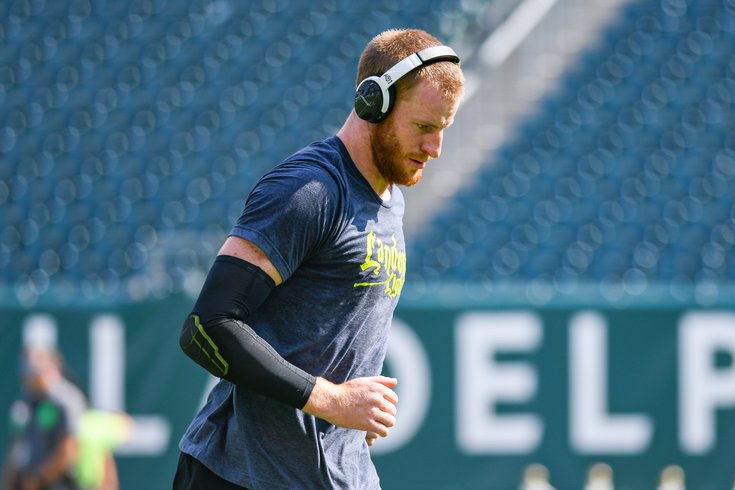 Say what you will about Carson Wentz this year, but he is nowhere near the top of the Eagles' list of issues as they've gotten out to a less-than-stellar 3-3 start to the season.

That, however, didn't stop one anonymous Eagles player from ripping Wentz through the media ahead of Sunday night's big NFC East matchup against the Cowboys in Dallas.

ESPN's Josina Anderson, who previously reported that an Eagles player was critical of the front office "dropping the ball" by missing out on Jalen Ramsey, appeared on NFL Live on Thursday to share some more information from her Eagles sources. Here's what Anderson said on the air, via Bleeding Green Nation.

“Well, with the team being 3-3, obviously, an Eagles source also talked to me about how that offense is functioning.”

“One of the things that they said is: ‘We need to make bleep simpler. Sometimes you just need to handle what is manageable.’ They said: ‘Even Peyton Manning knew when to check it down.’”

Carson Wentz right now is 38% on passes that travel 15 air yards, has three interceptions on passes like that, which is tied for most in the league. He also has 148 passes on those that are 10 yards or fewer. Right now he has nine touchdowns and zero interceptions like that. So I do think it is an apt point.”

This is hardly the first time Wentz has been criticized by teammates behind his back. Last season, Anderson also reported that an anonymous Eagles source believed Wentz was favoring Zach Ertz and ignoring some of his other receivers. Then, earlier this year, PhillyVoice published a report citing several sources inside the locker room who questioned Wentz' leadership. One of the complaints centered around the fourth-year quarterback's tendency to complicate things on offense, which appears to be echoed here.

But that's missing the point, because to read what Anderson said, it almost sounds as though her source hasn't been watching Eagles games this season. Sure, Wentz' completion rate on long passes may be poor, but how many of those passes have been dropped, or were too closely contested because his receivers were unable to get separation? And of course his completion percentage (and interception rate) is going to be better on short passes — because, duh.

The bottom line is this, Wentz hasn't been getting any help from his receivers this season, and he's still having an impressive showing — 12 TDs, 3 INTs, and 244 yards per game — despite all those injuries and drops.

“Wentz has dealt with 17 drops thus far, which is the most any quarterback has had this season. In addition, this receiving unit that is littered with talent has been horrendous in contested-catch situations, hauling in just 33.3% of their contested targets (27th).”

On top of all this, Wentz has been playing without his full complement of weapons for most of the season, with the exception of the season opener, when he connected twice with DeSean Jackson for 50-plus-yard touchdowns and connected with Alshon Jeffery for another, albeit shorter, touchdown.

No one seemed to be complaining about Wentz or the deep ball then.

And in the weeks since, the problem has actually been the opposite of what Anderson's source suggests. They've been checking down plenty, perhaps too much — they've even been getting Jeffery involved in the screen game — and haven't taken as many deep shots as you'd like, largely because when they do, none of Wentz' receivers seem capable of making a play.

Regardless of whether Anderson's source is right or wrong in his criticism of Wentz, the timing is very questionable to say the least, with the Eagles heading into a pivotal game with first place in the division on the line. Rather than focusing on the upcoming matchup in Dallas, this player is bad-mouthing his quarterback to the media. Whatever his motivations, it's a selfish move, and a very bad look.

Whatever you think of Wentz' performance this season and the offense overall, one thing is certain: the Eagles have a leak, and they'd be best to plug that thing before everyone gets wet.