Week 7 of the 2019 NFL regular season is in the books, and the Philadelphia Eagles' season is in jeopardy, after getting blown out in each of the last two weeks by the Dallas Cowboys and Minnesota Vikings. Let's get right to it. 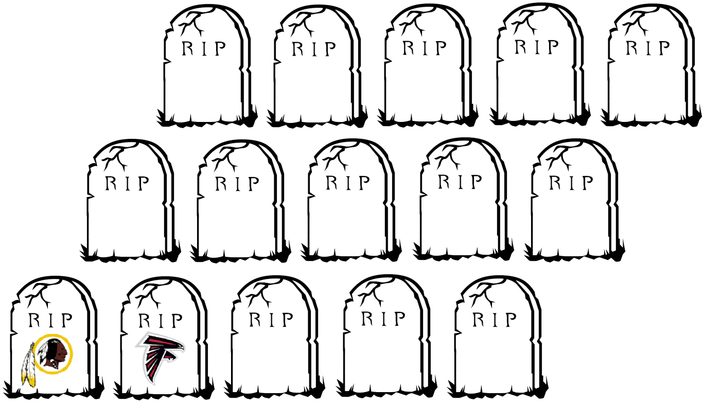 14) Giants (2-5): The Giants' run defense looked pathetic at times on Sunday. Look at some of these holes that one of the worst offensive lines in the NFL was able to open up against the Giants' defense:

I considered killing them off this week, but we'll wait and see if they can survive in Detroit on Sunday.

13) Buccaneers (2-4): The Buccaneers are in a bad position. They have no real chance of contending, Jameis Winston isn't good, and if the season ended today, they'd be picking 11th, with 7 of the spots ahead of them occupied by teams who could use a quarterback, in my opinion. Draft order via Tankathon:

The early bet here is that Winston is their quarterback again in 2020.

12) Cardinals (3-3-1): The Cards have a three-game winning streak! Of course, those wins came over the Bengals, Falcons, and Giants, by a combined margin of 10 points, but progress is progress.

Their next two opponents are the Saints and 49ers, so we'll see how that goes. Regardless, Arizona's main focus this season should be the development of Kyler Murray, which is going well.

11) Eagles (3-4): During the week of the Eagles-Cowboys game, a report emerged from Josina Anderson of ESPN that an anonymous Eagles player criticized the front office for not trading for Jalen Ramsey, as well as Carson Wentz's style of play.

On Monday morning, unofficial team mascot Howard Eskin said on the radio that the anonymous player was Alshon "Alshonymous" Jeffery, which led to the following exchange at Doug Pederson's press conference:

This is all kinds of uncomfortable...😬 pic.twitter.com/8vUtN891PR

Eskin then attempted to distance the Eagles from his comments:

The Eagles are coming off two blowout losses, and on top of that, they're going to face questions all week about Eskin's comments, which are kind of a big deal. I mean, if Eskin is correct that Jeffery is the anonymous source, then it's also probably true that Jeffery was the anonymous player who bitched to Anderson last year that Wentz was targeting Zach Ertz too much, among other gripes.

Eskin isn't a team employee, but for some odd reason the team allows him to stroll around the NovaCare Complex at will, and hang out on the sidelines during games. For an organization that goes way out of its way to hide injuries and anything else that they can from the media/public, why in the world do they continue to let Eskin have team employee-like access if he's going to create major distractions with the information he gathers, likely while enjoying his perks? It doesn't make any sense.

10) Lions (2-3-1): After a road win over the Eagles and a couple of moral victories against the Chiefs and Packers, the Lions were beginning to look like they might be something of a surprise team in the NFC. But, they lost at home to the Vikings Sunday, putting a big dent in any playoff hopes.

I do credit the Lions for being competitive in every game they have played so far, which is more than I thought I'd be saying about them at this part of the season.

9) Bears (3-3): The Bears' defense is great, but if Mitchell Trubisky is going to be a good quarterback, he probably should have shown it by now. Through five games, he is averaging 167.8 passing yards per game, and an awful 5.2 yards per pass attempt, despite a decent enough supporting cast on offense. Chase Daniel has arguably been better, sadly.

8) Rams (4-3): The Rams have two straight byes upcoming on their schedule, with the Bengals coming to town Week 8, and then their actual bye Week 9. Then they play the Steelers Week 10. Even with all their struggles and some valid criticisms of Jared Goff, the Rams should be 6-3 after Week 10.

7) Cowboys (4-3): The Rams are better than the Cowboys, but we'll place Dallas here because they're the best team in the absolutely craptastic NFC East.

6) Panthers (4-2): I will exercise my right to not write about the Panthers this week, as they are coming off their bye.

5) Vikings (5-2): After an embarrassing Week 4 loss to the Bears in which Kirk Cousins faced criticism from his own receivers, the Vikings' offense has come alive, and they have put together an impressive three game winning streak in which they have averaged 480 yards per game.

4) Seahawks (5-2): Ruseell Wilson threw his first interception of the season on Sunday, and it was costly.

3) Packers (6-1): On the one hand, it would have been fun to watch a matchup between Aaron Rodgers and Patrick Mahomes on Sunday Night Football, but Mahomes will be out with his dislocated kneecap. On the other hand, to the execs at NBC who make you sit through an utterly absurd number of commercials for these games...

.@49ers dressed 8 defensive lineman and the all ATE. It was like a “Luau Feast” with a big pig in the ground. Not often you see 8 DL all make an impact. And the Bosa Splash is something we all love to do. Let’s go play in some mud in honor or @nbsmallerbear #BaldysBreakdowns pic.twitter.com/Rh3pFTh0ky

1) Saints (6-1): The Saints have now rattled off four straight games in which they kept their opponents under 260 yards:

The road to the Super Bowl in the NFC is probably going to go through the Superdome again this year.