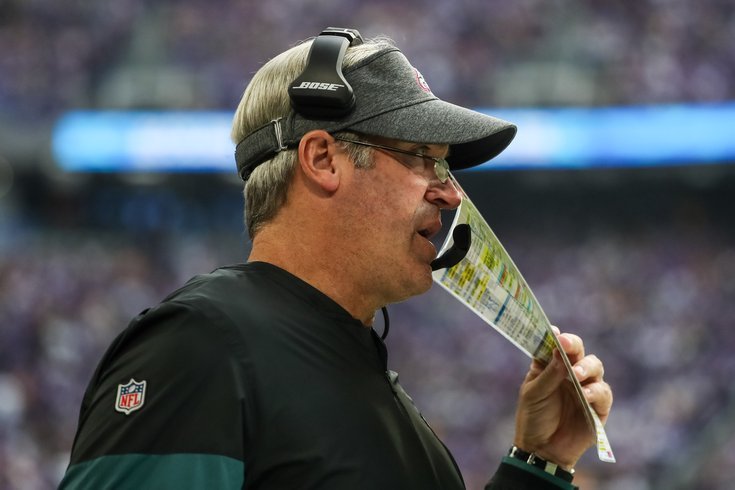 The Philadelphia Eagles have begun their week from hell after Sunday night's deflating 37-10 loss to the NFC East rival Dallas Cowboys, who now hold first place by a game that might as well be 10.

Sunday's miserable team performance aside, the Eagles organization is now caught up in drama about who's leaking information to the media, which players are showing up late to practice, and whether there's still time for them to bounce back from a season that's perilously close to unraveling.

RELATED: How many leaks does it take to sink the Eagles? We're about to find out.

The man at the center of it all, head coach Doug Pederson, came under attack on Monday from former Jets and Bills coach Rex Ryan, the son of former Eagles coach Buddy Ryan.

Appearing on ESPN's "Get Up!" on Monday, Ryan said Pederson made a mistake by not doubling down on his seeming guarantee to beat Dallas a week ago today. He also said his father, who went 8-2 against the Cowboys during his time in Philly, would have ensured the Eagles won the game.

"Pull a Buddy Ryan," Rex said Pederson should have done. "If you're going to say it, double down on it. Number one, my dad would have doubled down and he would have beaten Dallas, like he always did."

Rex Ryan had a 61-66 overall record as a head coach, to say nothing of his issues and intrigues off the field. His attempt to strip away Pederson's credit for Super Bowl LII by handing it to former offensive coordinator Frank Reich, now with the Colts, is not warranted by Sunday night's loss.

Pederson is rightly under the microscope for the Eagles' lack of urgency and preparation, but Ryan is probably the last person who should be so caustic towards him.

The early success Pederson has had in Philadelphia sets the bar extremely high in the best possible way. He's not going to get by as a Marvin Lewis type of coach.

All of Philadelphia's ugly struggles in 2019 are reminders that the extended afterglow of the Super Bowl may have clouded the Eagles' edge, focus and (most distressingly, because it's human) motivation. Dallas just put out the last remaining embers of 2017-18.