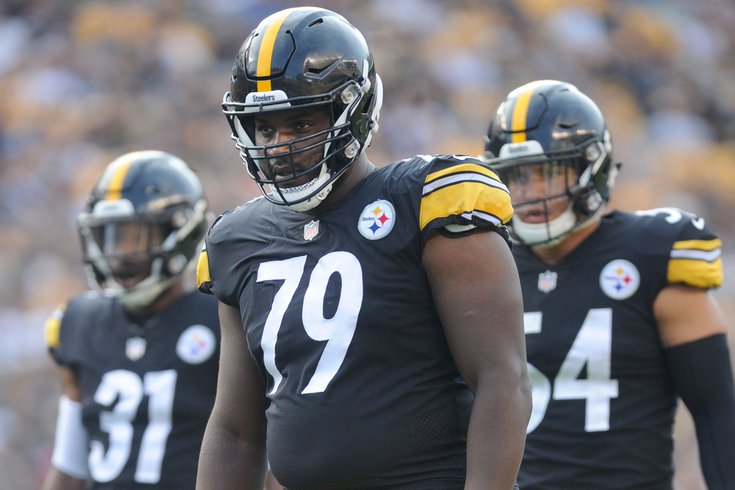 Question from Matt: If Nate Sudfeld is the No. 2, will they have 3 quarterbacks active on game day?

I have never bought the "Taysom Hill" stuff, and don't believe that the Eagles will try to use Jalen Hurts similarly. Hurts is a quarterback, and they're going to develop him as one.

That said, I do wonder if they'll keep Hurts active on gameday, even if not used in a gadget role, if Sud is the No. 2 to start the season. In the playoff loss to the Seahawks, the Eagles could have used their No. 3 quarterback, and I'll bet they've taken a closer look this offseason at the positives and negatives of keeping a third quarterback active, especially after drafting one in the second round.

But if I have to guess, I would bet that Hurts will be inactive on game day if indeed Sud is the No. 2.

Question from Norm Snead: Is the Eagles defense better than last year?

Yes. Darius Slay is the best cover cornerback the team has had since Asante Samuel, and the addition of Javon Hargrave should make the defensive line more disruptive. The benefit of those additions outweigh the losses of Malcolm Jenkins and Nigel Bradham, though I do think Jenkins is a significant loss.

And then I think you have to factor in improvement from some players already on the roster:

• You can maybe expect improvement from some of the younger guys, like Derek Barnett, Nate Gerry, and Avonte Maddox, for example. I do think you have to worry about some regression from some of the older guys, like Brandon Graham, Rodney McLeod, and even Slay, but again, I think the potential of the younger guys breaking out to some degree outweighs the likelihood of substantial regression from the older players.

Question from RKotite: Give me a name of a high profile Eagle (not Alshon) that gets traded. Not will/should they trade him, but who would make sense to move now and why?

This is maybe a boring answer, but I still think it's Rasul Douglas. Previously, I had noted that there was no way the Eagles were going to keep him on the roster at his pay, after he received a "Proven Performance Escalator" bonus this offseason that raised his cap number to $2,309,572.

But then Douglas took a pay cut, and he'll now only count for $1,001,572 on the cap in 2020. Previously, I felt that the ceiling for Douglas in a trade would be some sort of low end player-for-player deal. With his new contract, maybe he's worth a draft pick to someone?

Question from John: Jimmy, What's your take on Dak Prescott? Is he being smart or selfish?

Smart. When you see the kind of money he is reportedly turning down, that often doesn't register with folks who aren't making millions. But the reality is that the Cowboys are trying to have their cake and eat it too, so to speak.

Prescott watched as Carson Wentz and Jared Goff, a couple of quarterbacks from his draft class, got paid during the 2019 offseason, and then he played the 2019 season on his crappy rookie fourth-round pick contract. He made it through to the other side having put up good numbers and staying healthy, and all leverage flipped to his side of the table.

The Cowboys had the benefit of having a legitimate starting quarterback on their cap at an extremely low number for four years, and all they have to show for it was one playoff win. Now they want him to take a team friendly contract with more years than Prescott should be expected to commit to, and at far less money than he can earn if he plays the franchise tag game that worked out incredibly well for Kirk Cousins.

Many in the Cowboys' fan base will view the player as being selfish, when their criticism should be aimed at the front office for mismanaging the situation.

Question from Injecting Clorox is the idea of a genius: Best value pick this year, Prince Tega Wanogho or K'Von Wallace?

I would say Wallace. I think he'll contribute immediately, and he has long-term starter potential. I think he'll end up being great value in the fourth round. Wanogho was a good value pick in the sixth round, but we don't know what other teams around the league know in regard to his medicals, so it's a lot more difficult to project his success. If he's healthy, he has a chance to be a steal, but that's a big "if."

Question from Kephas: What was your favorite Eagles game that you covered? What was just the worst game you covered?

There are a lot of choices for favorite Eagles game to have covered. To give an idea of the timeframe we're talking about here, I've been covering games in person since 2010. My top 5:

The worst game? I'd say pretty much every Eagles-Jets final preseason game. In recent years the media has a 53-man roster prediction pool that is due the night of that game. I spend more time working on that than actually watching the game.