What they're saying: Should Eagles sign Freeman or McCoy? How 'married' are they to Wentz? 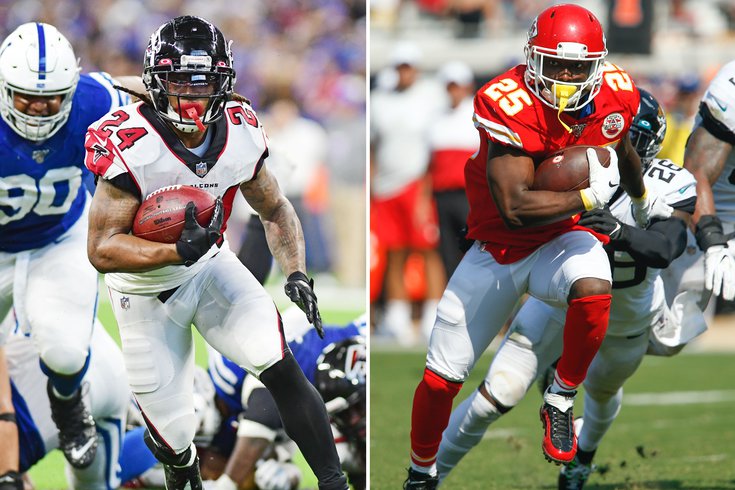 Welcome to a Friday edition of What They're Saying, where we'll catch you up on all the latest news and rumors surrounding the Eagles, from their quest to land a veteran backup running back to the latest on their franchise quarterback and even an interesting theory on why the Eagles made one of their big offseason moves.

Since you're probably ready to get your weekend started, let's skip a lengthy intro and just dive right into it...

On Thursday, Jeff McLane of the Inquirer reported that the Eagles had an offer out to free agent running back Devonta Freeman, while still maintaining interest in all-time franchise rushing leader LeSean McCoy, as they continue to search for a veteran running back to add to a group that features Miles Sanders, Boston Scott, Corey Clement, and others.

Aside from the four-year age difference between the younger Freeman and the more seasoned McCoy, there are differences in style as well. And over at Inquirer.com, columnist David Murphy took a look at the pros and cons of adding each rusher, and came away with the belief that there should be a clear favorite for the Eagles...

With McCoy, there might be more of a reason to believe that the player you’ve seen over the course of his career is the one you will get. But that player has a lot of similarities to the player the Eagles already have in Miles Sanders, and I can’t help but think that they would be better served with a steadier, more north-to-south runner.

Despite his size (5-foot-8, 206 pounds), Freeman is a physical runner who has thrived on the inside zone. Between 2015 and 2017, he was one of the most efficient short-yardage runners in the NFL, with only one running back eclipsing the number of first downs he gained on third-and-1 and fourth-and-1. In those three seasons, Freeman was successful on 37 of 54 such attempts.

Freeman is a more accomplished receiver than McCoy. Despite his struggles on the ground in 2019, he still finished the year with 59 catches for 410 yards and four touchdowns. In fact, he has averaged 54 catches per season throughout his career, seven more than McCoy.  [inquirer.com]

Over at ESPN, they ranked all 32 starting NFL quarterbacks by how "married" they and their respective teams are. And given that they just inked him to a massive extension last year, it's no surprise that Eagles QB Carson Wentz found himself high up on that list.

UPDATE [11:30 a.m., Saturday] — Originally, ESPN had Wentz ranked eighth, but apparently had something wrong with his contract info. They have since updated the post, and we've updated our post as well to reflect the new, much higher ranking.

Full disclosure: In the initial version of this article, published Friday morning, we had Wentz ranked No. 8 overall. But thanks to one helpful and knowledgeable reader, we identified a crucial mistake in our calculations that required us to re-evaluate and move him up.

Wentz's contract structure is built on staggered roster bonuses that were designed to help the Eagles navigate 2019 and 2020 salary cap issues. He's basically getting $30 million this year and $25.4 million fully guaranteed in 2021.

None of his salary is guaranteed beyond 2021, though a $15 million 2022 roster bonus becomes fully guaranteed if he's still on the team in March of 2021. (It's also worth noting, given Wentz's history, that his 2022 salary is currently guaranteed for injury.) The remaining proration of the bonuses means the Eagles would incur a dead-money charge of about $39.5 million if they decided to move on from Wentz in the 2022 offseason. (Our mistake was initially calculating this dead money charge as $24.5 million, which happened because we didn't count the $15 million 2022 roster bonus because it's not yet guaranteed. However, if they do get to 2022, it would have become guaranteed by then and therefore would have to count against the cap if he were to be released.)

That's a whopper of a cap hit, which likely means Wentz keeps playing on this contract for three more years, even though the Eagles aren't contractually married to him for any longer than that.  [espn.com]

Sticking with Wentz for a moment, the Eagles quarterback and face of the franchise uncharacteristically took a stance on a massive social issue on Thursday when he tweeted about the death of George Floyd at the hands of a Minneapolis police officer, who has since been arrested.

With social activist Malcolm Jenkins no longer on the team, it appears Wentz may be ready to step forward and fill that leadership void. And former teammates have taken notice.

You didn’t have to say a thing but you did! Love you bro! https://t.co/vdtS6tJ5RW

Additionally, Chris Long, a former Walter Payton Man of the Year winner and activist in his own right, had high praise of his former teammate during an interview on his "Green Light" Podcast with Warriors coach Steve Kerr.

“I just had that conversation with Carson Wentz,” Long said. “I shared with you that tweet. I was very moved by that because you heard Shannon Sharpe talk about this week. He said who’s gonna step up? We need Tom Brady, Aaron Rodgers. It’s great that we’ve got X, Y, Zs of the world, but we need the big named quarterbacks and that type of thing.

“So to see that happen, and [Wentz] said ‘institutional racism.’ He typed those words out. That was really important to me, and I got chills thinking about it because it’s so bare minimum, but that’s all we need. We just need guys to address it.”

Kerr and Long both said they seek out experts on issues to have discussions with before they make public statements. They want to be informed, and Kerr said he tries to “latch on” in order to learn as much as he can.

That’s the first step in being able to make a larger impact with a significant platform, both men said. And for Wentz, speaking out is a big first step.

“Hop in the passenger’s seat and say let’s roll,” Long said. “I think that’s the biggest thing for anybody out listening. You don’t have to be an expert. I know that had to be intimidating for Carson to send that tweet. I always knew he had that in him. I know that a lot of my teammates had that in them. Just because a guy is silent doesn’t mean he isn’t a good person, but right now, silence is not enough. I hope people step up.”  [pennlive.com]

Here's one last Wentz item that was almost as surprising as the QB's sudden decision to speak out on racial issues in the country, although the two aren't mutually exclusive as it's often the richest and most successful who fear speaking out because they believe they have the most to lose, when in fact they might be the ones who can most help bring about the systemic changes we so desperately need at the moment.

And Wentz, at least financially speaking, has quite a bit to lose.

•  The Philadelphia Eagles signed Carson Wentz to a contract extension in June 2019 worth $128 million over four years.

That $16.4 million signing bonus and $30 million option bonus that Wentz received is in addition to his regular $9 million salary, bringing his total football earnings to about $55 million, with another $4 million in endorsements bringing his total to north of $59 million.

As Forbes pointed out, the pandemic greatly impacted this list with baseball players being the hardest hit and football players seeing the biggest surge in number of players on the list due to the timing of when their season starts.

Finally, we arrive at an interesting nugget from an all-time great, Joe Thomas, who believes he knows the real reason why the Eagles were so desperate to acquire the likes of Darius Slay this offseason. Here's more from Mike Kaye of NJ.com:

Thomas, who was named to 10 Pro Bowls during his illustrious NFL career, believes Eagles general manager Howie Roseman wanted to find a way to stop [Cowboys WR Amari] Cooper from destroying his secondary on a regular basis. Slay held Cooper to just three catches for 38 yards during the pair’s previous meeting in Detroit last season.

Slay serves as a major upgraded over Ronald Darby as the Eagles’ No. 1 cornerback. He is able to match up and move around against the opposing team’s top wide receiver. Cooper has that role for the Cowboys, and Slay should be able to slow the Pro Bowl playmaker down in coverage.

Cooper caught a combined 10 passes for 130 yards against the Eagles in their two matchups last season.  [nj.com]

Earlier this week, our own Jimmy Kempski broke down the film on Slay and wrote about each of his matchups last season.