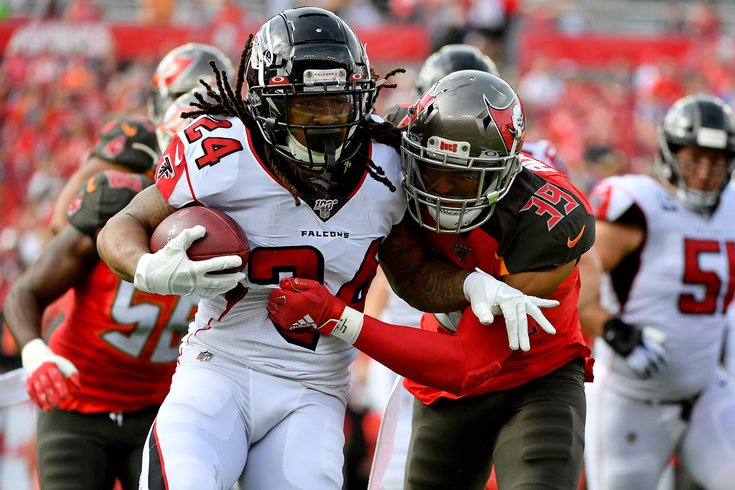 The Eagles have reportedly made an offer to former Falcons running back Devonta Freeman.

The Eagles' search for a veteran running back to add to their relatively young stable of backs has been going on for some time now, and ramped up after the team opted not to address the position in the 2020 NFL Draft.

For the last several weeks, three names have been floated as potential matches for the Eagles: Devonta Freeman, LeSean McCoy and Carlos Hyde, the last of which recently signed a one-year deal with the Seahawks. With the Eagles running out of options and minicamp potentially opening later next month, a move could be coming soon.

According to Jeff McLane of The Philadelphia Inquirer, Freeman and McCoy remain the two names to watch when it comes to the Eagles. And the Birds even have a contract offer out to one of them.

A few things on the #Eagles’ interest in free agent RBs, per sources: They offered contracts to Carlos Hyde, who signed with the Seahawks, and Devonta Freeman, who is weighing other offers (Bucs).

They have interest in bringing back LeSean McCoy, but have yet to make an offer.

McLane quickly corrected his tweet, saying that the Bucs do not currently have an offer out to Freeman, only that they've expressed interest.

Freeman previously turned down a one-year, $4 million dollar offer from the Seahawks, who simply turned around and signed Hyde instead. Here's what NFL insider Ian Rapoport had to say earlier this week about Freeman's demands, why they might need to be lowered and more...

“[Freeman is the] same guy who’s also been a featured back and a highly paid one for the Atlanta Falcons. And he’s in a situation where a lot of veterans are right now, believing that they deserve more than is being offered. And you really have two options here. You can do what Carlos Hyde did and say, okay, he wanted more than $5 million per year. At this point, in May, not going to happen. Just take the best deal you can, move on, and try again next year. That’s what Hyde did. Freeman has not put that decision in front of himself right now, has not decided to do that. Still wants big money. Could he actually retire? Maybe? Probably more likely is at some point realize to take what he can get and a team like the Philadelphia Eagles — who would like to add a veteran running back, and wouldn’t like to pay a lot for it — would make a lot of sense. I also know they have Shady McCoy, one of their old friends, in their sights as well.”  [h/t bleedinggreennation.com]

If the Eagles are able to get Freeman's asking price down — they are reportedly looking to sign someone closer to the minimum, according to Adam Caplan — then he's likely the best fit out there for them. Just last week, ESPN's Tim McManus said the Birds were planning on adding a veteran back "in the near future" and identified the aforementioned trio as the guys they're targeting.

Just a few hours later, Hyde went off the board, likely signaling to the Eagles brain trust that it's now or never. And given Freeman's versatility and age, especially when you compare the amount of miles on his odometer to McCoy, he's likely the better option despite a down year in 2019.

Last year Freeman, 28, had one of his worst seasons as a rusher, finishing with just 656 yards on 184 carries (3.6 yards per carry) and two touchdowns. However, he remained a dangerous threat as a receiver out of the backfield, hauling in 59 receptions for 410 yards (6.9 yards per reception) and four touchdowns. So, when you look at his total numbers — 243 touches for 1,066 yards and six touchdowns — it looks considerably better. Still, while he brings a versatility the Eagles covet in their players, he's also undersized at just 5-foot-8 and 206 pounds, and given what the Eagles already have at the position (smaller, versatile running backs) and what they are lacking (a bigger, bruising rusher), it's not a perfect fit.

If the team is unable to come to an agreement with Freeman, they'll likely turn their focus to McCoy, who is also coming off a down year and may be looking for one last ride with the team he grew up watching, not to mention his former teammates.

McCoy won a Super Bowl last season with the Chiefs, even though he was inactive for the big game, but finished the year with just over 100 carries. However, as he said on Good Morning Football earlier this month, he's not done just yet.

McCoy also hinted at his desire to return to Philly.

"I could see that. On another note, since I left, you haven't seen the 25 active in green, so you never know," McCoy said with a bit of a smirk on his face. "I'ma keep my options open, though. I could see myself there in Philly. Like I said, that's home, so you never know."   [nfl.com]

Shady has not been shy about expressing his interest in signing with the Eagles. Previously, he and wide receiver DeSean Jackson talked about it being time the two reunited again when McCoy posted "PHILADELPHIA=home ❤️❤️" on Instagram. And shortly after that, he said that he wanted to join a team where he could help a young running back (like Sanders, perhaps) learn and grown.

And just this week, Jackson again hinted on Instagram Live at a possible reunion, saying, "We might get him back."

But the franchise's all-time leading rusher will be 32 by the time training camps open, whenever that will be. In recent years, the Harrisburg native has seen his production trail off as he's found it harder to stay on the field. In a limited role last season in Kansas City, he looked slightly more like his old self, averaging 4.6 yards per rush (on 101 carries), his highest average since 2016. He finished with 646 yards from scrimmage and five touchdowns.

Given that the team has reportedly already made an offer to Freeman, it appears McCoy is currently the team's backup plan. But if they're unable to get a deal done with the former Falcons back, like they did in recent years with LeGarrette Blount, Jay Ajayi and Jordan Howard, look for them to turn their attention to McCoy.

Either way, it's looking like the Birds are closing in on filling out their running back room.