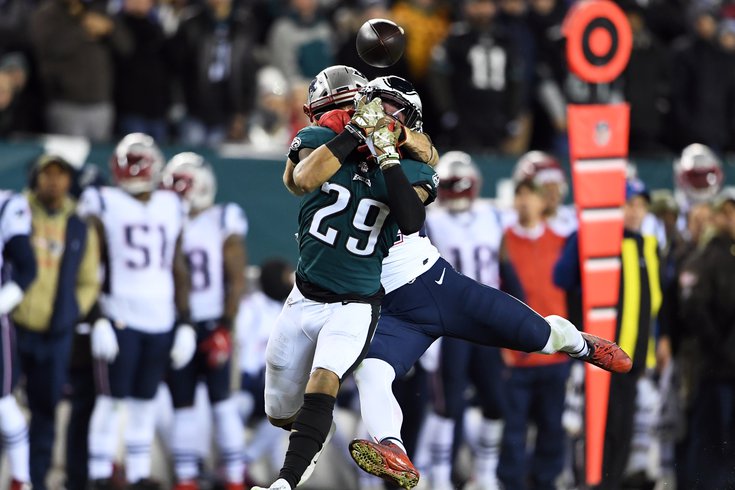 Today we'll look at Avonte Maddox, and the feasibility of him transitioning full-time to outside corner.

First of all, wait, Maddox is transitioning to outside corner? Yes, Howie Roseman's comments from back in March show that the Eagles are high on Maddox, and they believe that he can be a full-time outside corner. He's likely to start on the outside, opposite Darius Slay, over Sidney Jones.

"I grew up admiring the Darrell Greens and Aaron Glenns of the world, and these guys, they’re explosive, twitched-up guys who had an incredible vertical, and it’s hard to get the ball on them. Avonte’s got a lot of those same characteristics, if you look at his profile, his height, his length," Roseman said.

Maddox is indeed a very athletic player, but the challenge for him at outside corner will be his lack of length. Not only is he only 5'9, but he also has very short 29 1/2" arms. A look at his athleticism and size measurables:

Maddox has proven to be a versatile defender for the Eagles in his first two seasons in the NFL, starting games at outside corner, slot corner, and safety. For this exercise, I watched all the games that Maddox started at outside corner. There were 7 such games. Here's a short review of each of them:

• Eagles at Rams, Week 15, 2018: After starts in the slot and at safety, Maddox moved to outside corner in Week 15, where he remained for the rest of the 2018 season due to a comical number of injuries at the position. He was outstanding in his very first start on the outside. The Eagles almost exclusively played zone, and Maddox was up to the task every time he was tested. He had an INT (which was a great catch), a pass breakup, and late in the game he had a great tackle on Todd Gurley, keeping him in bounds, thus keeping the clock running, while the Rams were trying to drive for a game-tying score. On the final play of the game, the Rams targeted Maddox in the end zone, but he was there with tight coverage for the incompletion and the win.

• Texans at Eagles, Week 16, 2018: This was a very fun game, if you'll recall, with guys making plays all over the field for both teams. Maddox had some wins, some losses, and he had a chance for an INT when he read a slot receiver running a quick out from the slot into his zone. He jumped the route, but couldn't finish. Overall, an encouraging performance on a day in which he was occasionally tasked with covering DeAndre Hopkins.

• Eagles at Washington, Week 17, 2018: Uneventful game for Maddox, as Washington couldn't get anything going offensively behind Josh Johnson, Washington's fourth quarterback that season. Maddox did allow a receiver to get behind him in what looked to be his zone, but Corey Graham bailed him out.

• Eagles at Bears, Wildcard round of the playoffs, 2018: After three encouraging performances and a good first half in which Maddox nearly picked off a pass (he didn't get two feet in bounds), the Bears capitalized on Maddox's over-aggressiveness, lighting him up throughout the second half with double moves. Maddox was on the losing end of four plays of 20+ yards (45, 34, 25 and 22), including a TD to Allen Robinson. Had Cody Parkey's FG attempt found its way through the uprights, we would have remembered Maddox's performance as one of the reasons the Eagles lost this game.

• Eagles at Saints, Divisional round of the playoffs, 2018: With an absurd number of injuries in the secondary, Jim Schwartz somewhat understandably called softer coverages all day, leading to easy completions all over the field, several of which were in front of Maddox. There were some examples of Maddox’s ability in this game, including some examples of successful coverage on Michael Thomas, but the overall results weren’t great.

• Eagles at Giants, Week 17, 2019: Schwartz felt more comfortable with a lineup of Mills-Maddox-LeBlanc over a scenario in which Rasul Douglas or Sidney Jones had to play, and so Maddox finished the season once again starting on the outside. Maddox only played 19 defensive snaps in this game, before leaving with an injury. He did have a nice pass breakup on a deep ball to Sterling Shepard.

• Seahawks at Eagles, Wildcard round of the playoffs, 2019: Maddox gave up three plays in this game, but his performance wasn't as bad as I remembered. He gave up two decent gains in man coverage on David Moore. One was a crosser in which Maddox ran into other players through the traffic in the middle of the field. The other should have been an easy OPI call, but was missed. And of course, Maddox was the closest defender in coverage on DK Metcalf's 53-yard TD, the biggest play of the game. It was zone coverage, and Maddox was playing with outside leverage, so he may have been expecting help inside that wasn't there.

Here's a Twitter thread with some video of what we described above:

This offseason, we're looking at a handful of Eagles players who are either new, or are already w/ the team, but we perhaps don't know a lot about them yet. Here we'll cover CB Avonte Maddox & his transition to starting outside CB. 🔥 (Thread & article)https://t.co/BWgs8M67LX

• At times the Eagles have had guys like Jalen Mills and Rasul Douglas starting on the outside. While both physical players, they badly lacked speed. The Eagles finally have speed at corner, with two sub-4.4 athletes in Slay and Maddox. That will go a long way toward limiting the extreme number of big plays the defense allowed down the field in 2019.

• Maddox's lack of size may only come into play on a handful of contested catch situations throughout the season, but the bet here is that opposing offenses will look to attack him in the red zone if they have a competent big receiver with jump ball skills. Those are high leverage situations.

Also, he's not just short. He's light. As you saw in the Seahawks playoff game, the receiver was able to chuck him a few yards down the field at his break, creating huge separation. OPI? Yes. But if it's on a day where "they're letting them play," Maddox will be at a disadvantage.

And then of course with a player as small as Maddox, you worry about durability.

• Maddox is a ball hawk, as he looks to create big plays with turnovers. In the Twitter thread above, we saw the good side of that, and the bad. Maddox will have to learn when to pick his spots to be aggressive, or he's going to see double moves all day like he did in the playoffs in Chicago.

• Ultimately, we didn't see a ton of Maddox in man coverage. It was mostly zone in the games he started on the outside. It would seemingly be foolish to acquire an alpha CB in Slay, just to have him play zone, so the bet here is that Maddox will get more man reps on the outside in 2020 than he has in the past. Because of his speed, agility, and mirror/match skills, more man coverage should probably be a welcomed opportunity for Maddox.