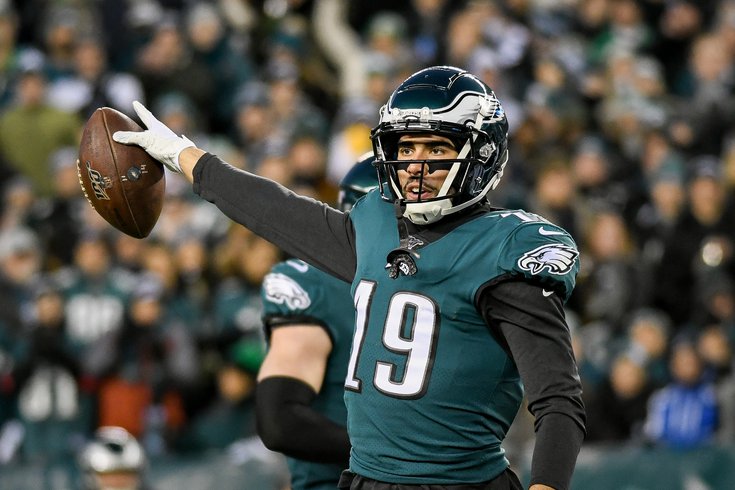 At some point, the Philadelphia Eagles are going to have training camp, on the assumption that (a) the COVID-19 global pandemic doesn't worsen, and (b) the United States doesn't erupt into some sort of civil war.

But hey, let's talk about football! Here are the Eagles' notable camp battles to watch if America's landscape doesn't resemble the set of a Mad Max movie by July/August/whenever:

The Eagles spent a very valuable draft resource on Hurts, but Sudfeld has a three-year head start in terms of grasping the playbook and the everyday minutia of professional football. The bet here is that with a shortened offseason, Sudfeld will be the No. 2 quarterback, and Hurts may even be inactive on game day.

That said, if Hurts impresses in his limited camp opportunities and shows that he is substantially more talented than Sudfeld (who I personally think has some nice positive attributes), he cannot be completely ruled out as the No. 2. It's just unlikely.

There's a lot to be settled at the wide receiver position, but the one certainty is that DeSean Jackson will start if he's healthy. Beyond Jackson, as a first-round rookie, Reagor will also have the inside track to start at one of the other starting wide receiver positions. It's probably more a matter of where he'll start, as opposed to if, but he'll still have to show something in camp.

Meanwhile, Arcega-Whiteside had a downright bad rookie season, but the team hopes that he'll show major improvement in Year 2. If not, while not explosive, at least Ward makes the plays you expect a professional receiver to make.

By Week 1, Doug Pederson will have to figure out the combination that works best for his offense.

And then, obviously, we'll see how the whole Alshon Jeffery situation will play out, but we won't get into all of that here.

3) Andre Dillard vs. the ghost of Jason Peters

(Note: I would also put the running back position into the "Let's see what the front office does" bucket.)

Brandon Graham and Derek Barnett are the starters, and Josh Sweat will be the DE3. Beyond them, the Eagles have a bunch of guys vying for that fourth DE spot in the rotation:

The Eagles will hope that one of those guys stands out in camp. If nobody does, the Eagles could also give some DE snaps to DT Malik Jackson, or sign Vinny Curry back or something.

5) Linebacker T.J. Edwards vs. Duke Riley vs. Jatavis Brown vs. the rookies

Nate Gerry is the only sure-fire starter on the Eagles' roster at linebacker, while Edwards feels like the best candidate among the rest of the group to start opposite him. The Eagles do like Riley, who they made the special teams captain after Kamu Grugier-Hill went on IR last season.

Otherwise, the team added a bunch of undersized, athletic types in Brown as well as a pair of rookie draft picks in Davion Taylor and Shaun Bradley. Even though Taylor was selected with a third round pick, he is more of a project than a candidate to be an immediate starter.