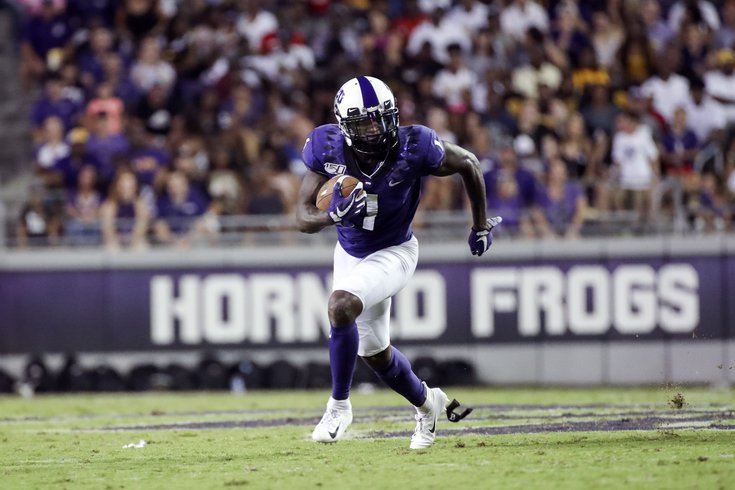 Jalen Reagor could see some return duty as a rookie.

Today we'll finish out the series with the specialists.

Through his first three seasons with the Eagles, Jake Elliott has been consistent, hitting roughly 84 percent of his field goal attempts each season:

In 2019, Elliott didn't miss a field goal attempt until Week 13 in Miami, and he would go on to miss four field goals in a four-game stretch. He did go 5/5 to close the season against the Giants Week 17 and the Seahawks in the playoffs.

In November, during his perfect field goal streak, Elliott signed a five-year contract extension worth $19,308,100 in new money. He is only the 11th highest paid kicker in the NFL on an average annual value basis. That was a good deal for the Eagles, given the struggles of other teams around the league that have had trouble finding a reliable kicker.

On the whole, Elliott is right around the middle of the pack in terms of field goal percentage, which is fine for a kicker in a cold weather city who never misses the big boy pressure kicks.

Johnston was ninth in punting average (46.4) and eighth in net average (42.3). He has a big leg (like, not literally -- he just punts the ball far), but his directional punting needs work.

Johnston will count for $750,000 on the cap in 2020, which is fine. Next offseason, Johnston will be a restricted free agent, which means his cost will be somewhere in the ballpark of $2 million if the Eagles choose to tender him. I'm not so sure that's a given.

For the first time in a few years, the Eagles are heading into a season with some intriguing new options in the return game. We'll cover each return candidate:

• Jalen Reagor: Reagor has some experience returning kicks and punts in college, but the bet here is that the Eagles will only use him as a punt returner initially, as they have other guys who can handle the more dangerous (injury-wise) kick returns. On 15 punt returns in 2019, Reagor averaged 20.8 yards per return, mostly on the strength of a pair of TD returns, like this one against Kansas:

And this one against West Virginia:

Note that those weren't just wide open lanes like you'll often see on college punt return TDs. He's juking guys and creating those lanes for himself, and then turning on the jets when in the clear.

The Eagles don't want to put a lot on their rookies' plates in a shortened offseason, but when you have a speed guy like Reagor who can make things happen in the open field, put him back there and let him do his thing.

• Boston Scott: A couple weeks ago we took a thorough look at Scott's skill set and his 2019 season, and we covered his contributions in the return game. In fact, we cut up video of all of his returns in 2019:

Our kick/punt return notes from that piece:

• The attributes needed for Scott to become a good kick/punt returner are there. As noted, in the screen game, he's adept at lining up his blocks and knowing when to throttle up and throttle down. That translates to punt returns, as you can see above.

Also, as an inside runner, he's effective as a "get it and go" guy, which translates to kick returns.

• There's some good and some bad, in terms of awareness.

On the "good" side, he does a nice job of sprinting up and fielding short punts. You can see examples of that against the Vikings and Bills, in which he was able to field punts that other returners would have let bounce, which can sometimes add on 15-20 yards of field position. Those are hidden yards that he preserved. Of course, in the Bills example, he got hit soon after, and fumbled the ball away. Call a fair catch.

On the "bad" side, he fielded two punts inside the 8. (I say the 8 because the Eagles don't adhere to the more commonly used "Don't field the ball inside the 10" philosophy -- They use the 8.)

Anyway, Scott fielded two punts at around 5, both of which probably would have been touchbacks, and one of which caused the Eagles to start at their own 6 at a crucial juncture against the Patriots, because Rudy Ford committed a block in the back foul.

• The fumbles are a problem. You can't take the ball out of Carson Wentz's hands before he even takes the field.

I would view Scott as the leading candidate to return kicks in 2020, and he could also get some opportunities on punts. But again, the fumbles just cannot happen.

• John Hightower: Hightower was Boise State's primary kick returner in 2019. He averaged a decent 24.6 yards on 26 returns, and one TD, shown here:

He only had one career punt return attempt. He will give Scott legitimate competition for kick return duties.

• Corey Clement: 18 career kick returns, 7 career punt returns. The Eagles don't want Clement to be their primary returner, but he's there if they need him, on the kick return side.

• Quez Watkins: 19 career punt returns at Southern Miss (9.4 yards per return), 18 career kick returns (20.3 yards per return). One punt return TD. Watkins has 4.35 speed, but of the two Day 3 rookie wide receivers, I'd give Hightower the edge in terms of having a role as a returner.

Killins is a longshot to make the 53-man roster.

• Miles Sanders: The Eagles used Sanders as a kick returner in 2019, and his 66-yard return against the Packers kick-started a stagnant offense. I highly doubt they will use him on special teams in any way in 2020.

• DeSean Jackson: Before Jackson got hurt last season, the Eagles planned on using him in some kind of return role, which likely would have been limited to high-leverage situations.

"DeSean Jackson will fit into that question somewhere," Fipp acknowledged before the start of the 2019 season. "We've talked a lot about that, kinda what his role might be. I would say it this way. I'm sure he'll have a role. Exactly what that will be, I'm not sure that anyone knows that totally yet. As we get into the season and start playing games, we'll find out how much he's playing on offense, how much he's got left in the tank, all those sorts of things will help us determine what he'll do for us.

"There are a lot of variables with a guy like that. How many plays (in the regular offense) is he playing? How old is he? How many plays can he handle? Can he handle more workload? Can he not? Does he want to do it? Does he not want to do it? All those things factor in. If he doesn't want to do it, then he's probably not going to be very good anyway. What's the situation in the game? Are we up by a lot, where it's not worth the risk of an injury or something like that on a play like that? Is the head coach on board with playing him? Is the owner and general manager all on the same page? There are just a lot of variables."

Will he have a role in 2020? Given (a) his importance to the regular offense, and (b) his fragile body, the bet here is probably not, especially if Reagor shows return ability.