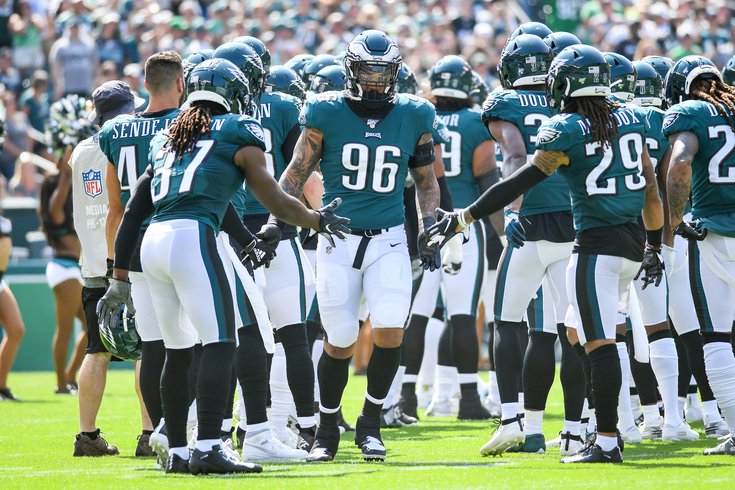 In 2018, an ankle injury kept Graham on the PUP list deep into August, and he had his least productive season in years. Fully healthy in 2019, Graham improved his numbers in every pertinent category, and had something of an underrated season:

The Eagles hope that Fletcher Cox will do the same in 2020, by the way.

Graham just is what he is. He's not a double-digit sack guy, but he gets pressure on the quarterback, and he's an elite run defender who creates way more than his share of negative plays in the run game.

The coaching staff's love of Barnett isn't matched by many fans, which is understandable, considering the following:

While many would like him to have more than 14 sacks through his first three seasons, he did have 7 sacks a year ago in 14 games, and his pass rush repertoire continues to evolve. He also has big game experience, and has made his share of monster plays in big moments.

Barnett is still only 24 years old, and there's is legitimate reason to believe he can have a breakout season in 2020. The reality is that the Eagles need Barnett to be a good starter. They're going to have to find a successor for the 32-year-old Graham soon, and having to find two new DE starters would not be an ideal position to be in.

With a stacked defensive tackle rotation in the middle of the line, Barnett should see his share of favorable one-on-one matchups on the edge.

In April, the team exercised Barnett's fifth-year option for 2021, and his cap number will likely be north of $10 million. The Eagles would love for Barnett to show that he is worth a contract extension so that they can work out a deal that brings down his 2021 cap number substantially.

Barring an unexpected trade or DE signing, Sweat is now the Eagles' DE3, and he's going to receive a bump in playing time in 2020.

Sweat was being hyped up by his teammates during 2019 training camp, and while he showed some progress during the season, he needs to continue to make significant jumps going forward. As he continues to figure out the NFL, his upside remains reasonably high, due to his freakish athleticism.

Avery is an explosive-but-undersized (6'0, 31" arms) pass rusher that the Eagles acquired at the 2019 trade deadline for a 2021 fourth-round pick, and he only wound up playing 33 snaps in the regular defense for the Eagles the rest of the season. While the trade for Golden Tate at the 2018 deadline was more of a "win-now" type of move, the trade for Avery had the long-term in mind, per Howie Roseman.

"He obviously had two and a half years left on his contract," Roseman said during his year-end press conference in January. "He was someone we thought was a young player who had explosive traits and when we talked to the defensive coaching staff, they said this trade will pay off more in the future than it will through the course of the year, and so we understood that. We understood that it was a high price to pay, but it's hard to find guys with his skill-set and he's a versatile guy. But he'll be best served with an offseason."

Obviously, Avery won't get that full offseason with the Eagles in 2020.

In April we took a detailed look at Avery's game, and cut up some clips in the following Twitter thread.

This offseason, we're looking at a handful of Eagles players who are either new, or are already with the team but we perhaps don't know a lot about them just yet due to limited action. Here we'll cover Genard Avery. 🔥 (Thread and article)https://t.co/wAKzjKT3DG

Avery's appeal is that he can maybe be a hybrid linebacker / pass rusher. The Eagles only used him as the latter, in his limited snaps. His best usage was as a stand-up rusher in a "Joker" role.

Miller was a 2019 fourth-round pick who was active for two games as a rookie, and he didn't play a single snap with the regular defense, when six other defensive ends were able to get on the field ahead of him. That's not ideal. #Analysis.

Ostman was having a very good camp in 2019 and was going to make the team before he tore his ACL in training camp. The Eagles tried using him in a variety of ways, including the aforementioned Joker role above. To be determined how far Ostman has come along in his recovery, and if he can impress in 2020 camp the same way he did a year ago.

Toohill is another undersized-but-athletic DE that the Eagles took a flier on in the seventh round of the 2020 draft because of his athleticism. His path to making the roster in the short term will have to come via special teams.