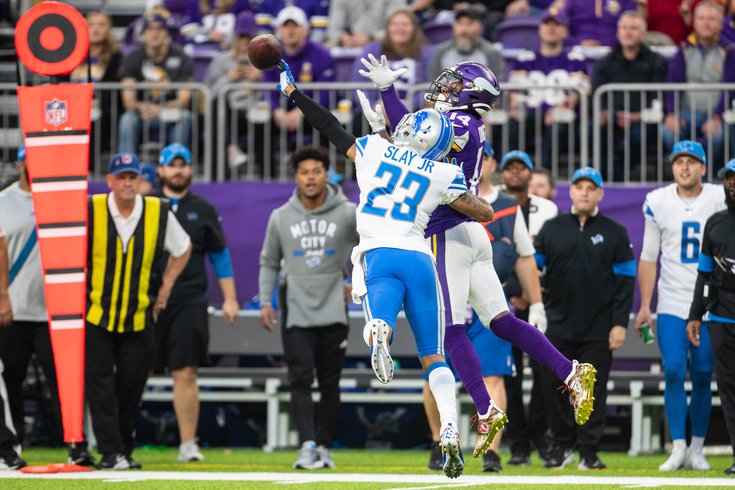 New Eagles cornerback Darius Slay breaks up a pass intended for Minnesota Vikings wide receiver Stefon Diggs last season when he was with the Detroit Lions.

While much of the sports world awaits the highly anticipated Washington Post story on the Washington [Name TBD]s that is supposed to be quite the bombshell — and, apparently, has nothing to do with its now-former racist name — we figured it was as good a time as any to round up the latest news rumors and analysis surrounding the Philadelphia Eagles. Because if this story is anywhere near as explosive as those with knowledge of it are making it out to be, it's going to dominate headlines for the rest of the week.

For the last week-plus, we've been keeping you up to date on Jeremy Fowler's series for ESPN+ in which he's ranking the top 10 NFL players at each position. We've already looked at where Carson Wentz, Zach Ertz and Lane Johnson ranked, as well as Jason Kelce and Fletcher Cox.

And now, with the recent release of his top 10 cornerbacks, another Eagles player has found his way into the previously mentioned group. Unlike the others, however, this player has yet to play a game in an Eagles uniform after being their big offseason acquisition earlier this year. That's right, it's Darius Slay, who finished fourth overall behind Stephon Gilmore, Jalen Ramsey and Tre'Davious White.

Slay isn't coming off his best season in Detroit, but unrest existed between Slay and the Lions organization. Plus, Lions corners played consistent man despite the defense ranking next to last in sacks with 28, applying more pressure on downfield routes.

"Slay is a guy you'll go into Sunday with all day," said one NFL coordinator. "He'll play man coverage all day -- he'll battle, not afraid to get in spaces, match up with anyone, and he can run."

Over the last three seasons, Slay allowed the league's third-lowest completion percentage as the nearest defender, at 51.8.

That's why the Eagles are elated to get Slay, who signed a $50 million extension with the team after Philadelphia swung a trade with Detroit. The Eagles held out for a lead corner for the last two years and got the deal they wanted.

"He's got natural ball skills and awareness in the open field, which will help him age well," said an NFC defensive assistant coach.  [espn.com]

Cowboys fail to lock down Dak...

This next story doesn't deal specifically with the Eagles, but it should be important to their fans nonetheless.

On Wednesday, the deadline for franchised players to work out a new deal with their team passed, meaning that guys like Dak Prescott will be playing this year on his one-year deal and will have to wait until next season to get an extension done.

This news is relevant to the Philadelphia Eagles since the Dallas Cowboys failed to reach a multi-year agreement with starting quarterback Dak Prescott. The Eagles can enjoy this development because the Cowboys are only hurting themselves by waiting to reward him. The longer they wait, the more they’re eventually going to have to pay. Patrick Mahomes recently signing a $500 million contract should serve as a reminder that the market is only going up.

The theory here is that the Cowboys have been reluctant to pay Prescott because they truly know he’s a quarterback you win with and not one you win because of ... and they know they have to pay him like the latter. The problem with doing just that, though, is that committing so much money to Prescott limits the talent they can surround him with. And Prescott needs to be supported by an environment in which he can thrive as opposed to being the guy to elevate a lesser supporting cast.

Prescott’s situation mirrors the one that Kirk Cousins experienced back in Washington. Washington was reluctant to sign Cousins to a long-term deal because, while he posted some good stats, it didn’t translate into meaningful team success. The same is true for the Cowboys, who’ve only achieved one playoff win (with help from a moronic opponent) in four years with Prescott starting.  [bleedinggreennation.com]

And, ultimately, that led to Cousins walking in free agency and signing with the Vikings. If the Cowboys hope to keep Prescott, they'll also have to make a little history, as the only two quarterbacks ever to play a season under the one-year tag both left for new teams the following offseason.

Our own Jimmy Kempski took a deep look at what this all means earlier on Thursday, and you can read that here.

And it's not only Eagles writers who see this lack of a long-term deal as a plus for Cowboys' rivals. Over at ESPN, Bill Barnwell took a look at the winners and losers of this situation. And while Dallas went down as one of the biggest losers, the rest of the NFC East joined Prescott among the winners...

Winners: The rest of the NFC East

While the Cowboys are Super Bowl contenders this year with Prescott in the lineup, the best thing that could happen for the Eagles, Giants and Washington would be to see Dallas lose its star quarterback for free. What happened on Wednesday pushes Prescott and the Cowboys closer to a divorce.

Washington knows all about Dallas' predicament, having franchised Cousins twice before letting him hit free agency. Daniel Snyder's team was 26-30-1 (.465) with Cousins as its starter; while that's not championship football, the organization has gone 10-22 (.313) since, even while trading a second-round pick for Alex Smith and using a first-round choice on Dwayne Haskins.

The team couldn't have anticipated what would happen with Smith, of course, but it has become clear that it would have been better off by sticking with Cousins, who has been an above-average quarterback in Minnesota.  [espn.com]

If anyone can do it, Peters can

The big story surrounding the Eagles this week was the signing of Jason Peters — not to mention the news that, at 38 years old, he'd be moving to a new position on the other side of the line. Interestingly enough, it's not the first time in his career that Peters has switched positions.

After coming into the league as a tight end, Peters moved to offensive tackle one day during practice. And the story of how it went down is one worth revisiting. Here's more from former offensive lineman (and Peters' former teammate at the time he first changed positions) Ross Tucker...

The scene was the Buffalo Bills indoor facility in Orchard Park, N.Y., late in the 2004 season. Jason Peters was a rookie tight end out of Arkansas who had just been promoted from the practice squad to the active roster, primarily because he was a unique 320-pound athlete whom the team thought could be a force on special teams. Which he absolutely was, by the way, whether it was blowing up the wedge on the kickoff team or blocking punts and returning them for touchdowns like he did on the road against the Bengals.

But his most legendary feat didn’t occur in front of any fans. It was just a normal Wednesday practice. Someone in the organization decided to have Peters join the offensive line during one-on-one pass protection drills. It’s a difficult drill for an offensive lineman because the defender knows that it is a pass and that the lineman he is rushing against doesn’t have any help.

Peters’ first rep was against a young, practice squad defensive end, and even though Peters didn’t really know what he was doing from a technique standpoint, he was able to stonewall his fellow rookie. Then he did it again. And then he shut down a second-stringer and locked up our starters.

Nobody could beat him. Nobody.

We all started to look at each other with a combination of shock and awe while offensive line coach Jim McNally’s eyes lit up with excitement.

Peters was a better pass blocker in 15 seconds than I had been in 15 years of playing offensive line at that point. I remember thinking, “You have got to be bleeping kidding me.”  [theathletic.com]

As Tucker wrote, the switch Peters is trying to make is "incredibly difficult and essentially unprecedented." Furthermore, according to The Athletic's Sheil Kapadia, only seven offensive linemen in NFL history have started 10-plus games at 38 or older — and none of them were switching positions.

But, if there's any player that can do it, it's Peters. And it's hard to question Tucker's confidence after what he saw Peters accomplish in Buffalo.

Finally, Sam Monson of Pro Football Focus took a look at 10 players who needed to have big training camps if they hoped to earn an expanded role for their teams in the upcoming season. One of the players Monson highlighted was T.J. Edwards, who our own Jimmy Kempski examined in his own series on new players/players in expanded roles.

Heading into his second season, the former UDFA linebacker has plenty to prove, but also showed some solid skills, especially against the run in 2019, and with some improvement in camp could earn a big role in Jim Schwartz' defense this season.

T.J. Edwards has a real shot to earn a starting spot for the Philadelphia Eagles in what is one of the more unlikely stories in recent years. Edwards, an undrafted free agent in 2019, has graded well at every level of football that PFF has seen but is battling against poor measurables in terms of size, speed and athleticism.

He doesn’t rank above the 59th percentile among linebackers in any measurable PFF tracks. He ranked lower than the 25th percentile in seven categories and is a second-percentile athlete in the 10-yard split. Edwards fits firmly in the athletic category of “should not be good” at the NFL level, and yet, he has posted impressive PFF grades throughout college, in the NFL preseason and across the 122 snaps he had as a rookie.

He’s even graded well (83.5) on special teams, where he played 353 snaps in Year 1. Edwards has legitimately earned a chance to start, but another strong training camp and preseason would assuage any doubts the Eagles may have in his ability to take that next step.  [pff.com]