A peek at the NFC East: Dak Prescott will play on the tag, Washington's mystery scandal TBD 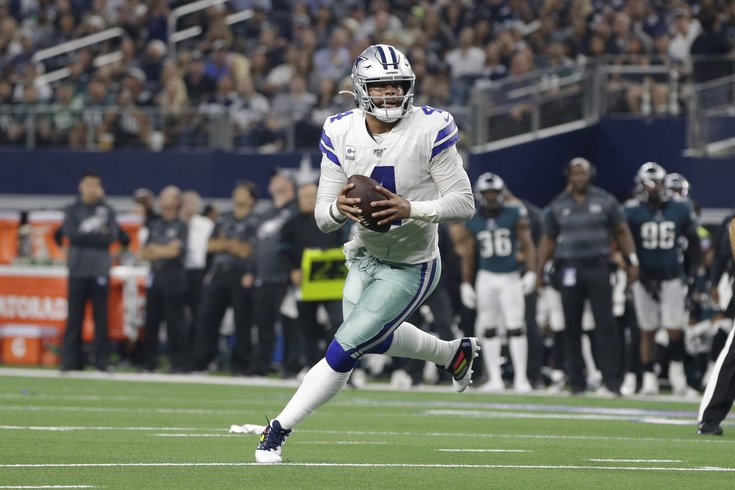 There's news around the NFC East, so we'll take a break from the Philadelphia Eagles briefly, and catch up with what's going on with the Cowboys, Giants, and the unnamed Washington team.

Dak Prescott will play the 2020 season on the franchise tag

Only two quarterbacks in NFL history have played a season on the franchise tag. They were Drew Brees, in 2005, and Kirk Cousins, who got tagged twice, in 2016 and 2017. Both players eventually became unrestricted free agents, with Brees landing with the Saints, and Cousins signing a fully guaranteed deal with the Vikings.

The reported final offer, via Jane Slater, was somewhere in the range of $33 million to $35 million, with $100 million guaranteed.

I’m told the final offer on the table for Dak Prescott is between 33-35M annually with over 100M guaranteed. While there have still been no discussions between the two that’s the deal the #Cowboys have presented ahead of tomorrow’s deadline per a source informed.

The Cowboys have also reportedly been adamant that Prescott signs for five years, so we can probably assume that was part of the offer as well. Prescott has been called selfish by fans around the league, but that offer makes little sense, frankly, if reported accurately. It was a no-brainer for Prescott and his camp to turn it down.

Why? Well, let's say the Cowboys' offer was for $35 million per year on a five-year deal, with $100 million guaranteed. That would be $175 million. How could he turn that down?!?

Well, $100 guaranteed is a low percentage of guaranteed money, relative to other recent quarterback deals. Take Carson Wentz and Jared Goff, for example.

If the Cowboys offered Prescott $35 million/year on a five-year deal, yes, that's more than what Wentz and Goff got on a "per year" basis, but only 57 percent of Prescott's amount was guaranteed.

Meanwhile, Wentz and Goff got their contracts a year early, which should result in a discount, while Prescott had to prove himself and stay healthy for an extra season while continuing to play on his crappy fourth-round rookie contract. (Again, to be clear, we're only working off of reported numbers, but we're just trying to illustrate the difference in those deals.)

The bottom line is that Prescott is in a better position betting on himself once again in 2020, and if he has even a decent season, he's going to benefit in one of three ways:

Meanwhile, the Cowboys are in a bad spot in this situation. To begin, Prescott's salary cap number rose from $2,120,848 in 2019 to $31,409,000 in 2020, and as a result, they were unable to retain players like Byron Jones, their best defensive back, and Robert Quinn, their best pass rusher last season, among others.

Looking ahead, they're now facing another significant raise for Prescott next offseason, but because of the coronavirus pandemic affecting league revenues, that will likely be without the benefit of a rise in the NFL's salary cap. Of course, they could always let Prescott walk in free agency and go with some cheaper veteran or try their luck in the NFL Draft, but that would almost certainly damage any realistic short-term chances of competing for a Super Bowl.

Jerry Jones and the gang had the benefit of having a legitimate starting quarterback on their cap at an extremely low number for four years, and all they have to show for it was one playoff win. That major advantage is officially over.

Harmon played in all 16 games for Washington last year, starting eight. He had 30 catches on 44 targets for 365 yards and 0 TDs. While certainly not a household name, Harmon was going to compete for a starting job opposite Terry McLaurin in 2020. If you thought the Eagles' wide receiver position was shaky, McLaurin aside, look at this mess. At a minimum, the loss of Harmon further depletes an already very thin group of skill position players.

For a few days now, reporters have been doing that extremely annoying thing where they go, "HOOOOO BOY! WAIT UNTIL YOU SEE THIS NEWS THAT'S ABOUT TO COME OUT!" And they don't actually say what's coming.

I’m on paternity leave and know nothing about anything but this....this is weird pic.twitter.com/JsVzmTyzVF

Journalism schools, do me a favor and teach young folks coming up not to do that. Like, on Day 1. Thanks.

Like Prescott above, Scherff, the Washington team's starting RG, was unable to agree to a long-term deal, so he'll play the 2020 season in the tag.

And finally, rounding out the rest of the NFC East's franchise tag news, Williams will play on the tag in 2020 as well.

We've made fun of Dave Gettleman and his trade for Williams repeatedly here, most recently in our Giants dumpster fire piece. The short-short version is that Gettleman traded a a third-round pick (which became the 68th overall pick) in 2020 and a fifth-round pick (that could become a fourth-round pick) in 2021 to the Jets for Williams, essentially for eight games in a season in which they were already 2-6, lol.

After Williams finished the season with 0.5 sacks, the Giants then continued to pile onto that sunken cost by tagging him. Williams will count for $16,126,000 in 2020, or 8.2 percent of the Giants' cap.