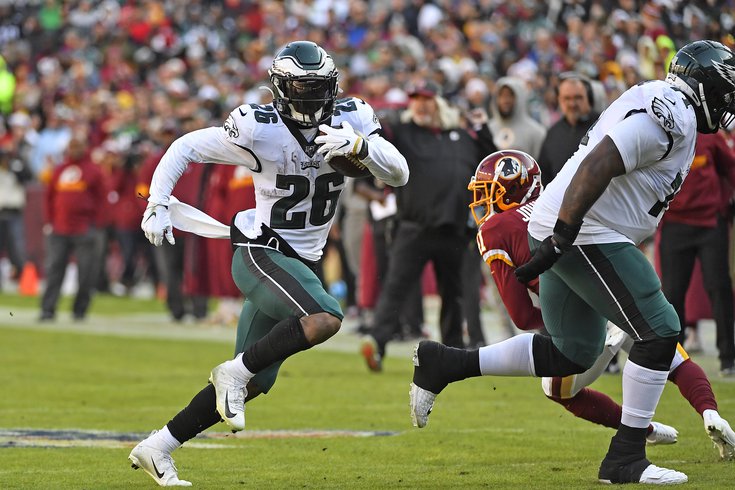 Over the next three weeks or so (basically whenever there isn't other news to cover), we'll take a look at every player on the Philadelphia Eagles' roster, and how they fit with the team heading into training camp, assuming, you know, there is a training camp.

We started with the quarterbacks on Thursday. Today we'll look at the running backs.

Sanders has a chance to be really, really good, as the early indications from his rookie season were overwhelmingly positive. As a rookie, Sanders headed into the NFL with three question marks:

How'd he answer those concerns?

Ironically, there weren't concerns about Sanders as a runner, but he had some issues early in the season, missing open holes, dancing in the backfield at times, and being too eager to bounce runs outside. To his credit, Sanders humbly acknowledged those early speed bumps, diligently worked toward correcting them, and by season's end, he looked like a complete, veteran back.

Down the stretch in 2019, beginning with the Eagles' loss in Miami (and not including a Week 17 win against the Giants in which he left the game early with an injury), Doug Pederson was all in on Sanders, relying on him to shoulder a considerable load down the stretch. In the four-game stretch from Week 13 to Week 16, Sanders averaged 22.8 touches per game, which is in the same neighborhood as other high-volume backs like Ezekiel Elliott and Christian McCaffrey.

Of course, that heavy usage was no doubt influenced by an injury to Jordan Howard as well as the Eagles' practice squad receiving corps, but it is interesting nevertheless that a rookie was featured so heavily when the team's season was on the line.

In 2020, Sanders will clearly be "the guy," but a usage rate of 15-20 touches per game is probably more realistic.

We won't go too deep on Scott here, since we took a thorough look at his skill set and his 2019 season last week.

After failing to crack the initial 53-man roster, Scott had an unexpected breakout season in 2019, sparking a stagnant offense in desperate need of some juice from the skill positions. He was especially effective in the Eagles' two wins over the Giants, in which he had four rushing touchdowns, as well as 10 receptions for 153 yards.

Scott emphatically secured his 2020 roster spot last season. At a minimum, he should be a complementary piece in the offense, particualrly in the passing game, and more specifically in the screen game.

The belief here is that Scott would flourish in a No. 3 RB role who can enter games situationally, and who proved in 2019 that he can be the primary back in a pinch, should he have to take over for an injured Sanders.

Clement originally signed with the Eagles as an undrafted free agent, and in his rookie season, he rushed 74 times for 321 yards (4.3 YPC) and 4 TDs, while adding 10 receptions for 123 yards and 2 TDs. In the Super Bowl, Clement caught 4 passes for 100 yards and a TD. His career has since been slowed by injuries.

This offseason, Clement was scheduled to become an unrestricted free agent, which would have cost the Eagles $2,132,000 on their salary cap. Instead, they let him hit the open market, where he (presumably) didn't find much interest, before returning to the team two days after the 2020 NFL Draft on a minimum contract.

Clement would make sense in something of a No. 4 RB role, as a guy who can play special teams, and can come off the bench if there are injuries, however, it is difficult to project much more of a role than that, given his lack of production the last two seasons.

Holyfield went undrafted in 2019 after a productive career at Georgia, and signed with the Carolina Panthers, where he spent the season on the practice squad. At the conclusion of the 2019 regular season, the Eagles poached him off of the Panthers' practice squad after losing Daeshon Hall to IR.

Even as the son of Evander Holyfield, Elijah Holyfield got lost in the shuffle in college at Georgia, which produced a pair of top 35 picks at running back in 2018 in Sony Michel (31st to the Pats) and Nick Chubb (35th to the Browns). After Michel and Chubb left for the NFL, Holyfield shared carries with the more well-known D'Andre Swift.

Holyfield has good vision, he runs under control using quick steps to find a crease, and when one opens up, he hits it with conviction. One significant downside is that Holyfield had just seven receptions over his college career. He also had a really bad Combine:

His 4.78 40 obviously did not help his draft stock. With an average Combine, he would have easily been a Day 3 pick.

Holyfield was on the roster for about one week during the Eagles' 2019 season, and they probably didn't pay much attention to him, since they were preparing to face the Seahawks in the playoffs. Like we'll explain with the undrafted free agents below, Holyfield was likely hurt by the shortened offseason as a result of the COVID-19 outbreak.

According to a source, the Eagles had draftable grades on both Warren and Adrian Killins below, but were able to sign both of them as undrafted free agents after the 2020 NFL Draft.

Warren is a between-the-tackles bowling ball, who runs with power, but also does a nice job picking his way through traffic with quick, choppy stops. A look:

Over his last two seasons at Cincinnati, Warren rushed for over 2,500 yards, though on a low yards per carry average, mostly due to poor O-line play.

The Eagles have gotten good production from undrafted running backs in the Doug Pederson - Duce Staley era, most notably from Clement when he was a rookie, as well as Josh Adams.

Obviously, with no spring rookie camps, OTAs, minicamps, a likely shortened training camp, and potentially no preseason games at all, guys like Warren and Killins saw their chances of making the team plummet.

On the bright side, for the Eagles anyway, if they like what they see from Warren and/or Killins, they should easily be able to get them on the practice squad.

Little guy (the Eagles generously list him at 5'8, 177), some receiving chops, return ability, and speed.

Again, with extremely limitied opportunities to impress the staff, his chances of making the team are probably slim-to-none, but he's a good practice squad candidate.

Ever since the Eagles traded LeSean McCoy for Kiko Alonso, while the Eagles have found pockets of success with a "running back by committee" approach, they have struggled to find a do-everything runner they could just leave on the field for all situations. They have also not had consistency at the running back position, as they've had a different leading rusher in each of the last 6 seasons.

Some fun trivia here: McCoy, Murray, Mathews, Blount, and Adams all played for new teams the year after leading the Eagles in rushing. That oddball streak will end in 2020.

The Eagles will shift somewhat from a committee approach to the snap counts being dominated Sanders, assuming he stays healthy. He is a complete, dynamic player who can run inside, run outside, pass protect, and make plays in the passing game. He is also capable of picking up first downs in short yardage situations, as he runs with more pop than is perhaps perceived, while also being a home run threat because of his plus speed and athleticism.

However, it is easy to see why the Eagles are looking to add depth.

Beyond Sanders, Scott is a complementary piece, as noted above, but the Eagles lack a true power back who can eat carries in the second half of games when the team has a lead, or simply give Sanders a few series off here and there.

They are unlikely to spend much on a backup running back, so you can forget about trading for guys who either make decent money (or want to) like Raheem Mostert, Leonard Fournette, and Le'Veon Bell. You can also cross off guys like Devonta Freeman, who want more money than the Eagles are willing to spend at the position.

The bet here is that Howie Roseman seeks out a running back with a soon-to-be expiring contract in the trade market (think Day 3 pick), as he found good value there in the past with guys like Jay Ajayi and Jordan Howard.