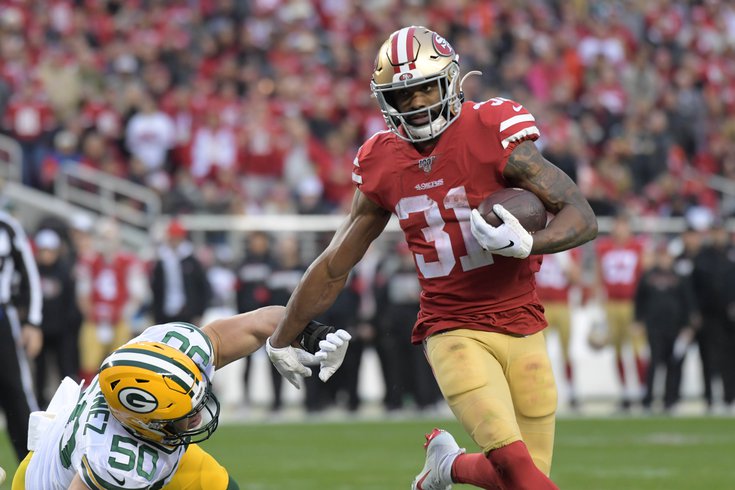 San Francisco 49ers running back Raheem Mostert wants a new deal — or the 49ers to trade him.

The Eagles have been patient in their ongoing quest to add a veteran running back to the roster to take some of the pressure of second-year starter Miles Sanders and a room that's full of youth and lacks experience. And that may pay off for Howie Roseman and Co.

While much of the talk has surrounded Devonta Freeman or a potential reunion with LeSean McCoy, there could be a different reunion on the horizon should the Eagles get involved. That's because 49ers running back Raheem Mostert, a former undrafted free agent with the Birds, has requested a trade out of San Francisco after the two sides remain unable to get a new contract done. Here's what Mostert's agent, Brett Tessler, tweeted on Wednesday afternoon:

After months of unproductive talks with the 49ers about fairly adjusting Raheem Mostert's contract (which paid him for special teams) we have requested a trade. Disappointing that it would come to this for a guy who led all NFL RBs in YPC & helped lead them to the Super Bowl.

Mostert currently has two years remaining on his contract, and would come at a reasonable cap hit for the Eagles — he would cost $3.16 million against the cap in 2020 and $3.5 million in 2021. That salary ranks him 23rd among running backs, but when you consider that Sanders will be on his rookie contract for the entire length of Mostert's deal, it makes the position much more manageable from a financial standpoint.

Beyond that, however, it would come down to whether or not Mostert would be interested in playing for a different team without a new deal. After all, he would be leaving a Super Bowl contender so odds are he won't be going to a better team, something that sometimes allows players to put their contract on the back burner while they chase a ring. And if the contract is the only thing keeping him from playing in San Francisco, than it's worth wondering if he'd be willing to play elsewhere for that same money. If that's the case, it would suddenly make it a bit tougher for the Eagles to get something done.

According to Ian Rapoport, however, Mostert isn't looking for a huge pay bump.

Spoke with @TesslerSports about RB Raheem Mostert and his trade demand from #49ers. His request was simply to bring Mostert in line with the highest paid RBs on the team. Tevin Coleman makes $4.55M in 2020 and that’s where Mostert wants to be. He has two years left on his deal.

MORE: Marquise Goodwin says 'the Jewish community is lashing out at me' over BLM comment on DeSean's IG post | What are the football ramifications if Eagles release DeSean Jackson? | Shander: DeSean needs to learn his lesson, but cutting him would be a bit much

His current contract would actually make him the highest paid running back on the Eagles, so a new deal wouldn't need to be done based on those qualifications. But if it's the $4.55 million number that he has it sights set on, that makes it a slightly tougher decision for Roseman.

The Birds currently have over $20 million left in cap space for this season, but odds are they're going to try to save the majority of that to carry over to next season, when they're already projected to be $50 million over the cap — and that's before a potential cap dip caused by COVID-19. And unlike bringing in Freeman or McCoy, Mostert is going to cost the team in terms of a current player or future draft pick, so that needs to be factored in as well.

All of that aside, Mostert would make a ton of sense for the Birds from a football perspective. He fills a need, led all running backs in yards per carry last season (5.6), and had by far the best season of his career. Here's a look at his 2019 rushing numbers vs. the first four years of his NFL career:

Additionally, Mostert had 53 carries for 336 yards and five touchdowns in three playoff games for the Niners last year. To call it a breakout season for the 28-year-old running back would be an understatement. And with the Eagles needing some help in the backfield, he at least makes sense on paper — and would still allow Sanders to handle the lion's share of carries. And given that he has fewer than 200 career carries under his belt, the proverbial tread on his tires should be just fine.

Now, it depends whether or not Howie is willing to pay the price ... and of course, whether or not this is just a smokescreen by Mostert and his reps to try to force the 49ers, who already lost Matt Brieda this offseason, back to the table. We already know the Eagles ultimately get linked to every available player — and Roseman is known for working the phones — so it's probably only a matter of time before reports come out that the Eagles have reached out to the 49ers.

Either way, it's definitely something for Eagles fans to keep an eye on as training camp approaches later this month.