The veteran wideout's future is uncertain after he shared anti-semitic quotes attributed to Hitler on Instagram. 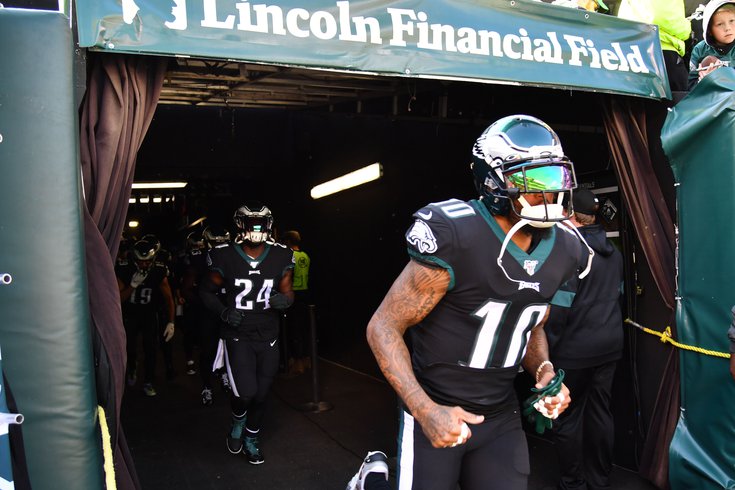 If the Eagles release DeSean Jackson... again... they will suffer greatly from a football perspective.

The Philadelphia Eagles have a decision to make on DeSean Jackson's future with the team in the wake of Jackson's anti-Semitic Instagram posts. Should they keep him, or release him? As of Wednesday morning, it appears as though he's going to remain with the team.

DeSean and his reps have spoken to Rabbi Doniel Grodnitzky of Chabad Young Philly to help and DeSean will be educating himself pic.twitter.com/V4WMvSVM1y

What do the fans want?

After Jackson spent all day trying to perfect his apology, I ran a poll of my own Tuesday evening, just out of curiosity to see how opinions may have changed throughout the day. It swung wildly in the other direction:

Poll: Should the Eagles release DeSean Jackson? (Just curious where the fan base’s collective heads are.)

I get the feeling that if Shelton Gibson had posted quotes he attributed to Hitler on his Instagram account, he wouldn't be getting over 78 percent of voters saying he should stay.

Here, for the sake of being thorough, we'll look solely at the football ramifications of releasing Jackson.

Jackson signed a three-year contract last offseason worth $27 million. A snapshot of its structure looks like this, via OverTheCap.com:

So what does all that mean? The important areas to focus on here, in terms of the Eagles' ability to release him, are the "prorated bonus" and "guaranteed salary" columns.

If Jackson's Instagram posts cause a forfeiture of salary guarantees, the Eagles would not be on the hook for the $4.8 million (duh), and would incur $7,736,000 in dead money, with $873,000 in cap savings, if they released him.

(To note, Jackson's dead money would count toward the 2021 cap, which doesn't make much of a difference, as the Eagles will be rolling their leftover 2020 cap money into 2021 anyway.)

In short, it'll be costly no matter what if the Eagles decide to release Jackson.

Prior to the start of the new league year, it felt like the team would address the wide receiver position both in free agency and the draft, seeing as their top three receivers heading into the 2019 season all had varying levels of unreliability:

However, the Eagles passed on the free agent market completely, which showed some level of confidence in Jackson's availability in 2020. Outside of the organization, most close observers of the team assumed that the expectation for Jackson should have been that he would miss time at some point during the 2020 season due to injury, though I guess nobody could have foreseen him posting quotes on Instagram that he attributed to Hitler.

Of course, the team did address the wide receiver position heavily during the draft, selecting speed receivers in Jalen Reagor (round 1), John Hightower (round 5), and Quez Watkins (round 6), while also trading for aging 49ers speedster Marquise Goodwin. That group of newcomers could help solve the Eagles' speed issues of a year ago, but the team would severely lack experience at receiver.

Take Jeffery and Jackson out of the picture, and Eagles receivers have the following career receiving numbers:

That would be a total of 3,013 career receiving yards among the group, 77 percent of which are by Goodwin, a player who suffered five concussions in a 17-month span in 2016 and 2017, and hasn't been an effective player since. By comparison, Jackson has 598 career catches for 10,420 yards, and 55 TDs.

Soooo, yeah, it would be kind of a big loss on the field if the Eagles released Jackson.