Eytan Shander: DeSean Jackson needs to learn his lesson, but cutting him would be a bit much 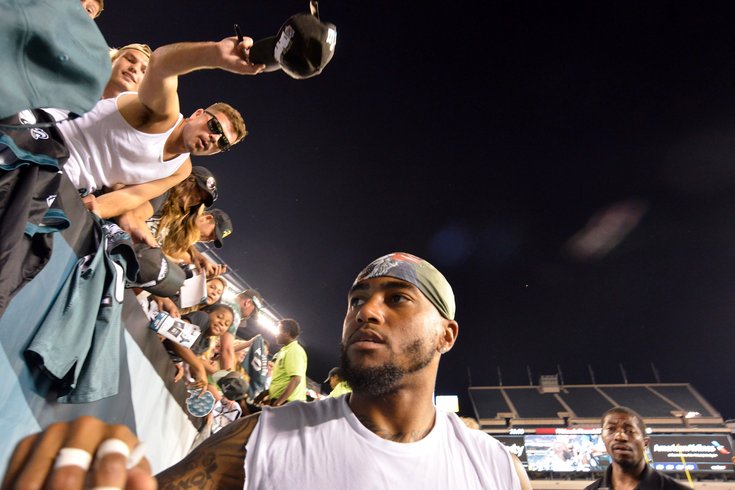 One of the most difficult things to do in life is hold a universal worldview and keep it consistent with everyone and everything you encounter. You immediately start falling into the trap of comparisons and hierarchy. Something bad happens, someone does something bad, or someone posts something incredibly stupid and moronic. We rush to force it – sometimes to the point of ridiculousness – into our already preconceived worldview. It’s a very lazy but truly human mechanism aimed at simplifying the world in which we exist.

The hypocrisy lies, of course, in keeping it consistent. Applying the same POV to everything that comes your way will eventually isolate you from everything. That’s why we pick and choose, we don’t want to lose our friends (or followers).

What DeSean Jackson posted was ignorant and hateful, especially it being on social media which is never designed for opening any dialogue. No matter the platform, we know it’s a hotbed of misinformation, Twitter included.

As a Jewish man, I am appalled and disgusted by what Jackson posted — and also rather amazed at how someone can misattribute quotes to, of all people, Hitler.

But I don’t think he should be cut. This isn't anything like Riley Cooper, nor should we take this exactly like we did Drew Brees. Every case comes with different facts. Don’t fall into the pit of ranking hatred or ignorance. Cooper was hatred. That I know.

I don’t subscribe to right or left rhetoric, so this comes from someone who’s been branded on the radio for years as fearlessly independent. We should be looking at what happened with Jackson, from his buffoonish posts to his multiple apologies, as an opportunity to educate, but more importantly allow someone to grow. The simplest solution after stripping away all the pilling on, is that the man posted something out of extreme ignorance rather than extreme hatred. You can attribute the same logic to Brees. I will not attribute that to Cooper, nor should you.

This isn’t a Dick Wolf show. We can’t prove intent by throwing someone on the stand and grilling them. But once again sports have provided us an opportunity to show the rest of our society how to move into 2021. We shouldn’t be asking for people to cancel DeSean like other players and fans wanted to cancel Brees. We should move away from that mentality as a whole. The biggest hurdle is getting away from vilify vs. validate. The idea is we are moving into a higher state of consciousness by becoming more aware of ignorance, bigotry, and hatred. We must take each individually, and determine that an ignorant Jackson or Brees can be educated. I’d rather have those two and their platforms behind them being catalysts.

This is exactly what the Eagles got wrong with Cooper years ago. Well, to be fair a bunch of things. They should have never caved to Chip Kelly and Michael Vick, both equal reasons as to why Cooper was never cut. They also did the least possible amount of work in creating any sense of fix or change. It was an insult to anyone who ever put on an Eagles jersey – player or fan. Cooper shouldn’t have been thrust into the forefront of any platform for change, he most likely should have simply been released and asked to “rehab” elsewhere.

Today that isn’t even a question.

Does anyone honestly think that man would survive an offseason video like that in today's climate? You are out of your skull if so. It’s why comparing what happened with Jackson to that hateful video is asinine. We know our world has changed and we continue to strive to make it better. We are more aware of how things can offend or hurt.

But the details are always drowned out by the extremes. Yes, Riley Cooper and anyone else saying that word should be out. Yes, canceling an episode of The Golden Girls is moronic. It’s when the waters get muddier that we find ourselves having difficulty. Stop treating hatred the same as ignorance. Allow people like Jackson and Brees to grow as human beings and use their platform for the better, while not forgetting it was their own idiocy that put them there in the first place. Easy solution.

It's hard to think this just a week or so after we saw MLB swallow itself during unnecessary negotiations, but the restart has actually deteriorated into something much worse. The league has totally botched the testing process which was – ya know — the whole point of that 100-plus page safety pamphlet. I’d make light of it and make some joke, but it’s the same negligence we’ve seen from some governments around the world. The league sat across from the players and assured them they would be safe. Now, we see teams shutting down spring training 2.0 because tests took too long or simply never came back. Philadelphia is no exception.

What in the world is going on here? We’ve seen Phillies hit with the virus to players being absent for precautionary reasons. Both are variables that no team nor league will be able to control. Unfortunately, due to the current nature of how the 60-game season will play out with travel, someone is going to get the virus during the season. Someone will have to sit out, and hopefully it won’t spread in the clubhouse. Sure, someone in a bubble is going to get it, but you have a pre-existing structure that people can self-isolate within the actual bubble.

Baseball isn’t even trying. The one thing they CAN control is how often they test players and who turns the tests around. Now, I’m not a fancy big city lawyer, but this seems pretty negligent. We certainly can’t forget how much of those awful negotiations were weighted by money.

MLB promised a safe environment and installed protocols to help facilitate player safety. That’s the one good thing they tried – key word there – to do to plant the belief of safety inside the players' brains. That’s it. Everything else was rushed or ignored. They either look incredibly lazy or negligent. How can we trust this league in an already unstable year? We can’t. No chance this thing lasts a full 60.

I’ll miss the Phillies this year like you will, but I’d rather see my favorite players healthy and back for a full season. The starting centerfielder was kept out of spring training because they never got his test back. The league will crumble before finishing the regular season. I’m not falling for the okie doke.

I want to keep this as open of a forum as possible. Please DM any questions you have on Twitter (@shandershow).

I admit the odds are not great, the return does take a minor hit laying the 15 points. The good news is the oddsmakers haven’t tipped their cap on two major issues regarding Hurts and his ability to start this season. The first being where the Eagles will finish, and the other being durability of Carson Wentz. I actually think both scenarios work out in favor of the rookie starting at least one game this year.

The Giants and Washington are train-wrecks already. They have zero shot of winning the division, and outside of a catastrophic injury in Philly or Dallas, won’t be making the playoffs. It boils down to how much better can both the Eagles and Cowboys play this year as opposed to last season’s limp to the finish line. Without an expected preseason it’s safe to say the first month — September or November – of play will be brutal. Defense and tackling will suffer the most, and the saving grace will be continuity and mental toughness.

Good news for us here in Philadelphia is there is a lot of carryover of skilled players around Wentz, something early on that could be a crucial difference maker. That plays out, and you’ll have an Eagles team atop the division with some playoff future locked in before the season ends. It doesn’t matter the seed, 1-3, home field and all. No better time than that game to throw out the rookie.

I maintain Wentz isn’t injury prone, but his durability during this specific season could come into play. He plays a beautifully violent style of football when he moves around, not shying from a hit. He could easily miss one game this year, enough to throw Hurts out for an emergency start. If we are to believe the team that the rookie will be used in other areas of the game, he should be ready to go at any point. Bet “yes” and hope for the best.