Including news on Aaron Nola, Scott Kingery, Adam Haseley and others 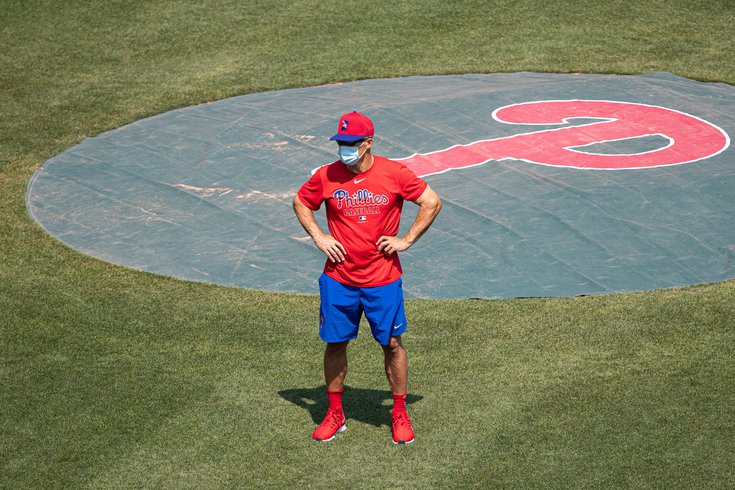 And that last part has really been what's made camp feel different this time around, as players have mysteriously been absent from the start of camp and seem to be trickling in on a daily basis. Because it's considered a non-workplace injury, HIPAA laws prevent teams from publicly identifying which players have tested positive for COVID-19 — despite the fact that deductive reasoning can basically point you in the right direction. But if a player (or coach) gives the organization permission, they are then allowed to discuss COVID-related issues surrounding that player.

And in the past few days, several players and coaches have given the Phillies permission to discuss their status, including several starters who were missing when camp opened last week — and some who continue to remain away from the team.

Let's take a player-by-player look at what general manager Matt Klentak had to say on Tuesday, as he opened with Zoom call with reporters by providing updates on the health of his team. First, the players who have returned to camp after initially being kept away...

The Phillies starting pitcher (and presumed Opening Day starter) returned to the field on Monday and threw a bullpen session. Klentak said that while Nola's absence was related to COVID, he never tested positive. He was only exposed to someone with the virus and never tested positive, but because of that exposure, MLB protocol required he isolate away from the team.

"I know that you all spoke with Aaron Nola yesterday after his first day in camp, and he threw a [bullpen session] and looked great," Klentak said. "And I know he detailed sort of the process that he had to go through and his protocol to get back on the field. So, I don't really have much more to add there, other than what he said, which is that he never tested [positive] and was just absent for a few days because that's what the protocols mandate when you have exposure to someone who's positive. So that's why Aaron wasn't there and he's given me and us consent to talk about that as well."

The Phillies closer also returned to camp this week. Klentak was more vague on Neris than other players, which likely only means that he didn't give the team permission to get into specifics, not that he necessarily tested positive (although there have been reports that he was one of the players the team placed on the special COVID list).

"You will see today, if you haven't already, Hector Neris is back in camp today," Klentak said. "He's completed all his protocols and is feeling great and ready to go."

Having their closer back in time for the start of the season should be big for the Phillies.

This is where things get really weird.

According to Klentak, there was absolutely no reason the Phillies starting centerfielder should've missed the first few days of camp. He never tested positive for COVID-19 and was not even exposed to a positive person. So why was he held out of camp? A lab error. Seriously.

"You'll also see today, if you haven't already, that Adam Haseley is back in camp. And Adam has given me permission to speak about what he's gone thorough," Klentak said. "And Adam, like Aaron, never tested positive, although in a slightly different sense, Adam never came into contact with anyone who was positive either. Adam's absence was because of a lab error — that's probably the best way I can put it. He took his test as part of the intake screening process last week. The test was sent in with the rest of the tests, and we never received a result from that. That's what happened.

"We're not pointing any fingers, but that's the reason his arrival in camp was delayed, because we didn't have a result for his test. Once we realized that we weren't going to get that result, we retested him and he tested negative and he's back as soon as — today's the first day he could be back — so there's really no issues whatsoever with Adam. He's done everything right, he's never been sick, and we're happy to have him back on the field today."

While it's good that the situation has been fixed and Haseley is fully healthy, it's a bit concerning that something like this could happen. What if this happens in a few weeks to a starting pitcher ahead of his scheduled start? Things like this could cost a team a win and impact the competitive balance in a season that already has plenty of issues.

Obviously, the safety of the players and coaches (and team/stadium staff) is paramount, so taking the safe route and holding a player out after a lab error like this is smart, but teams might be a little less understanding if it happens once the season starts. Klentak is hoping that they have all the bugs worked out by then, but isn't ignorant to the fact that with so many players be testing multiple times per week, there are going to be errors.

"I hope that they won't continue... My hope is that when an issue presents itself early in spring training like this, that it gives all parties the time to make the necessary adjustments and limit the instances of something like this occurring in the future," Klentak said. "I think we need to be realistic as well — and I don't know the numbers, you may know them better — but there are huge volumes of tests taking place daily. And I'm not trying to make excuses for the process, but when you have this number, this volume of tests like this, it's reasonable to not expect it to go perfectly, especially at the beginning.

"In Adam's case, I'm glad he was able to return after just four days away and will still have a two and a half week runway to get ready for the season. In Nola's case, very much the same — he only missed three days and should be fine. I think all of us in the industry need to understand that there are going to be ups and downs and instances that we need to work around, but so far I'm glad that we've had these guys return as quickly as they have."

And things could've been worse for the Phillies, as some teams had to cancel their workouts entirely on Monday after testing and shipping delays over the holiday weekend caused their results to not arrive on time. Luckily for Philly, it was only one player.

And now, a look at the players (and coaches) who have yet to report to camp...

According to Klentak, who was given permission by the players to reveal medical info, both Scott Kingery and Tommy Hunter have tested positive for COVID-19 but are doing well and are hoping to return soon.

Could they be back by Opening Day?

"I think the best way that I can answer that is that both those guys... they're both feeling very good right now, which is obviously the most important thing," Klentak added. "They still have to pass consecutive tests and follow the rest of the protocols before they return, but I think the fact that they are both feeling good bodes well for their timeframes. Beyond that, I could really speculate about a return date because we know the protocols can take — the time it takes to return can vary depending on the details of the protocols."

Sticking with positives tests, another member of the organization also tested positive, but was not part of the outbreak that took place in Clearwater earlier this offseason. Mikie Mahtook, an outfielder and non-roster invitee to camp, tested positive when he arrived in Philly and underwent his intake testing.

"Mikie Mahtook is positive [for COVID-19]. He did report to Philadelphia last week and participated in the intake screening process and it was during that process that his positive test was revealed. He, like the others, is feeling good and is itching to get back, but understands that he needs to follow the protocols and pass all the tests before he's cleared to return."

A trio of coaches

Klentak also revealed that three coaches tested positive — all of whom were among those who caught the virus in Clearwater — and said that each remain asymptomatic, which is great news.

"We had three coaches that tested positive for COVID as part of our outbreak in Clearwater a few weeks back who are still not here. Those three are [bench coach] Rob Thomspon, [bullpen coach] Jim Gott and [catching coach] Greg Brodzinski, all three of whom granted permission for us to reveal their names. All three of them have been asymptomatic for some time, but are still following the protocols before they can return."

Two of those coaches, Thomspon (56) and Gott (60), are close to that 60-year age threshold that would put them in a more dangerous category for those impacted by the virus. Klentak was asked if there was a chance any of the three, and specifically those two, opt out of the season.

"First of all, we're not forcing anybody to come back," Klentak said. "We absolutely understand, whether it's players or staff, that everybody's situation is different, everybody's health history is different, everybody's family situation is different, and we want everybody to feel comfortable making the best decision for themselves, without any interference or pressure from the organization. Given the two that you mentioned [Thompson and Gott], both are itching to get back and have been feeling good for several weeks now. So I don't anticipate that either of them would opt out, but again I want to make clear that if anyone in the organization felt unsafe or felt uncomfortable and felt like they wanted to opt out, the organization would support that."

Another non-roster invitee, Francisco Liriano may take Klentak up on that offer of opting out of the season. The veteran pitcher who had a chance at earning a bullpen spot for the Phillies this year has not been at camp the last few days as he makes a decision on whether or not to play this season.

"Francisco Liriano has been absent from camp the last few days. There is no COVID update there, he is really evaluating the situation and whether he wants to play or not," Klentak said. "And I don't know exactly where that's going to go, but he has not been at camp the last few days and I'm not sure if he will return, and if so, when. Right now he's evaluating the situation before determining next steps."

We're only a few days into Phillies camp and there's already a lot to keep up with on the health front — and we haven't even gotten into actual baseball-related injuries yet.