Aaron Nola says he's healthy, will be ready for Opening Day with Phillies 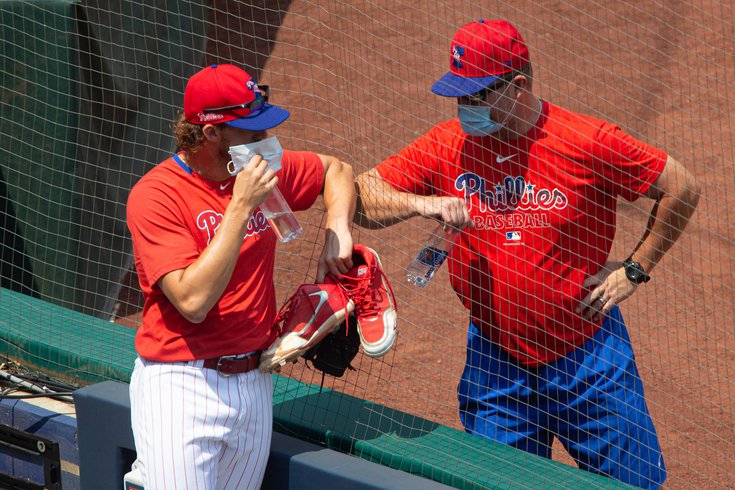 The Phillies will have their ace on opening day.

After being a late arrival in Philadelphia to start "summer training," Phillies starting pitcher Aaron Nola talked to local media members to address concerns that Nola had tested positive for COVID-19 Monday afternoon.

"I was just exposed to another person who had tested positive for the virus," Nola said. "No symptoms or anything. They wanted me to take caution and stay home for seven days. I got testing and stuff like that but it came back negative. I never tested positive."

Nola was one of seven Phillies players who were not in camp with the team on Friday when organized team workouts began. A second pitcher, Hector Neris, appears to be back with the team. Others remain absent (like Scott Kingery, Adam Haseley, Ranger Suarez and Tommy Hunter) with circumstances yet to be discussed publicly. There was ample fear among Phillies fans that Nola was one of the members of the squad who reportedly tested positive down in Clearwater last week.

The honor of the Opening Day start will in all likelihood belong to Nola if everything goes according to plan, ending speculation that Jake Arrieta may get the nod with Zack Wheeler on the cusp of welcoming a child just before the season starts.

Manager Joe Girardi, later in the afternoon, was non committal, however.

Joe Girardi said he was impressed with Aaron Nola's bullpen session today, but said it's "too early to tell" if he will be ready to start the opener on July 24 vs. Miami.

Still, Nola's health and availability lessen the pressure on Wheeler, and also on the back end of a starting pitching staff that has plenty of questions. The righty, who nearly won a Cy Young Award two seasons ago before falling back to earth (by Nola's high standards at least) last year, says he has thrown often and is in great shape with the season just a few short weeks away.

"I was throwing almost every day. We were able to go to the baseball field for a bullpen almost twice a week [in Clearwater]," Nola said. "I went home to Baton Rouge and got on a five-day routine with a couple up-and-down bullpens and simulated games every week. I tried to simulate a season and throw off a mound as much as I can... I feel like that really kept my body and arm in shape."

With just one day of Training Camp Part 2 under his belt, the 27-year-old said that "it feels kind of normal over here, it's just everyone wearing masks."

"We have to be really cautious, obviously, from here on out," Nola added. "Being my first day over here, it looks like it's going pretty good. You never know with the virus, things change pretty quick but we have to do our part."

Baseball is baseball, and when he's on the mound it'll feel like Nola is where he is supposed to be, doing what he's done all his life. But there will be a few small exceptions.

"It's going to get tough to get used to, I lick my fingers all the time," Nola said, commenting on new restrictions on licking fingers, spitting and other typical baseball behavior. "It's going to be easier in the summer heat... but later on in September or October when it gets chillier outside you'll have to get used to it, putting your hand in your back pocket and grabbing that wet rag."

If the Phillies are playing when it gets chillier outside, Nola and the rest of the pitching staff will be more than happy to adjust however is needed.