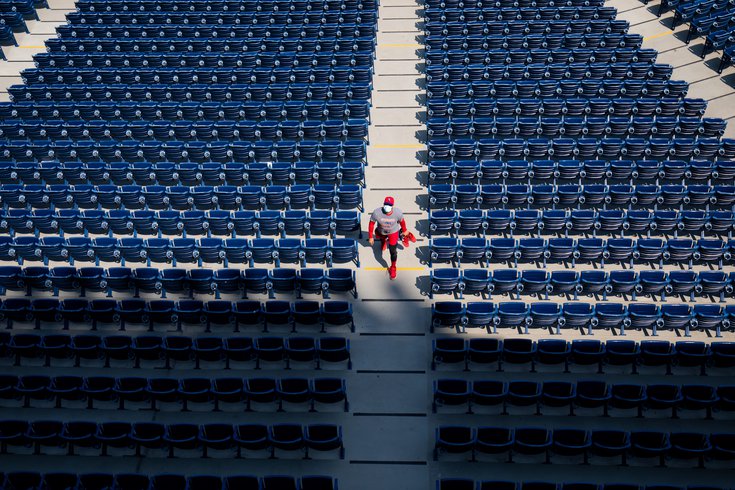 The Phillies have gotten back to work at Citizens Bank Park.

Baseball is back, but it doesn't feel like the return to normalcy that many were hoping it would.

The Phillies and 29 other teams are on their home fields, trying to get players up to speed to commence a 60-game schedule of regional games which are expected to start a few weeks from now. They are social distancing, wearing masks, practicing in an empty Citizens Bank Park — and across the street in FDR Park — and are undergoing extensive testing on a nearly daily basis.

All of this so they can go back to doing their jobs again and so we have something to watch, root for and talk about during a hot, long summer.

Philadelphia's baseball team has never had more question marks — just as the sports world does at large.

What are the biggest concerns for Phillies fans as we inch closer to hearing Franske and L.A. in our cars again?

1. Seven key players have yet to report

Well, it's six now, as Hector Neris has made an appearance in "summer training." But still, the Phillies could potentially begin the year without some really important pieces. And none of them can be officially identified as being on COVID-19 injured list — as HIPPA laws restrict the MLB from reporting that.

Here's more on that topic from The Athletic's Matt Gelb, who affirms that nothing really feels right at CBP:

And, three days into this ambitious plan, none of it still feels right. The Phillies practiced Sunday without their ace, closer, second baseman, possible center fielder, and two key relievers. The team has not disclosed why those players are absent. Their new presumptive Opening Day starter isn’t sure he should even be here because his wife is pregnant with their first child and due later this month.  [The Athletic]

For those keeping track, that's Aaron Nola, Neris, Scott Kingery, Adam Haseley, Ranger Suarez and Tommy Hunter. If any of these guys are not up to speed come July 24, the Phillies will have their depth tested very, very early (more on that in a minute).

UPDATE [12 p.m.] — It looks like Aaron Nola is suited up at Citizens Bank Park today for the first time.

Aaron Nola is at CBP. Looks to be preparing to throw a bullpen

On a non-COVID note, but not really, because everything is COVID-related right now, J.T. Realmuto is arguably MLB's best catcher, and set to become a free agent whenever this experimental season ends. With no idea what revenues will look like, a market value for his services remains a complete question mark. And while the team is allowed to negotiate, all signs point to nothing being imminent.

The T-shirt -- white with J.T. Realmuto’s name on the back -- caused a stir on social media Wednesday when Bryce Harper wore it for his first day of work this year at Citizens Bank Park. A day later, the shirt returned for Harper’s first session of batting practice.

And Friday, Harper wore it for a third straight day as the Phillies held their first official workout of summer camp, perhaps sending a message to the front office to re-sign Realmuto, who is a free agent after the season.

“No message,” Harper said. “But I think J.T. is a great player. If the Phillies don’t end up signing him back, which would be terrible and sad, I think there’s a lot of other teams out there that are going to want to sign the guy. He’s a Gold Glove-caliber catcher every year, he’s a great person, a great player. I mean everybody in this organization from the top down wants to see him in red pinstripes for the rest of his career, and hopefully we can make that happen.”   [Inquirer.com]

3. Pitching depth could define the season

We detailed this over the weekend, but in case you missed it, Phillies ace Nola has yet to report and Zack Wheeler, the Phillies No. 2, has a pregnant wife who could give birth sometime before the season begins. There is a substantial chance neither hurler is ready to pitch on Opening Day — a scenario manager Joe Girardi acknowledged. Here's a snippet from our Matt Mullin:

Already entering camp without knowing who will be their fifth starter behind Nola, Wheeler, Arrieta and Zach Eflin puts the Phillies at a disadvantage. Now, they might start the season down their top two starters — and could be without their big offseason signing for the majority of the season.

What would a makeshift first-time-through-the-rotation look like, assuming the Phillies need five starters to get through?

*Howard pitched one scoreless inning in spring training this March

Howard starting right away might be wishful thinking, as the team's top pitching prospect would need to beat out some other young pitchers with MLB starting experience like Cole Irvin and Enyel De Los Santos, but he's definitely the most talented arm available for that slot.

The above quintet holding its own against the Braves, Nationals, Mets and Yankees doesn't exactly inspire confidence. If the duo does miss time, they need Nola and Wheeler back ASAP.

4. The schedule is just awful

As we just touched on, the Phillies have one of the most difficult schedules of the entire shortened season, playing in the eastern quadrant of the country. Here's a look at the records last year of the Phillies' 2020 opponents:

The Phillies will need to play better than .500 baseball without key players for key stretches against six of nine potential opponents who had winning records last year, including the AL East champs, NL East Champs and World Series Champs.

5. Anything could happen in 60 games

This certainly swings both ways, but there seems to be an equal chance these Phillies win 40 games as they lose 40 games. Baseball is a streaky sport to begin with, and for a team like the Phillies, unproven but loaded with talent, any result would be believable. There has never been more pressure on a manager to make a contribution than there is with this shortened season.

Is Girardi up to the challenge?

Here's a piece from a column from The Inquirer's Mike Sielski that's definitely worth reading in full:

Over Joe Girardi's 10 years managing them, the Yankees twice went 84-78, their worst record during his tenure.

The first time was in 2014. They had 10 pitchers start at least eight games for them that season, but only one, Hiroki Kuroda, who started more than 20. For a team that managed to finish second in the American League East, that's a fair amount of rotation shuffling, whether because of injuries, ineffectiveness, or both.

It's nothing compared with what Girardi faces now, with the Phillies, in this shortest and oddest of major-league regular seasons.

"There is no handbook for this for managers," he said Thursday. "Managers weren't necessarily trained how to handle a pandemic."

There was no necessarily necessary in Girardi's assertion. The coronavirus wiped away the final half-month of spring training, put the sport on hold for more than three months, and cut the regular season's length by 63%.

"You look at it like you're a team in the race with two months to go," Girardi said. "You're tied for a division [lead]. You're tied for a wild card going in. Realistically, that's what everybody is."  [Inquirer.com]