It has not been a good week for the Philadelphia Eagles. And it's not even halfway over.

On Monday, many became aware of anti-semitic Instagram posts with quotes attributed to Hitler that wide receiver DeSean Jackson posted over the weekend. The quote Jackson posted included lines like, "“the Jews will blackmail America. The [sic] will extort America, their plan for world domination won’t work if the Negroes know who they were.”

It was bad. Really bad. And Jackson has since spent much of his time since apologizing for those comments, claiming they were born of ignorance and not hatred. But the backlash from that post, which has deservedly has come from far and wide, has apparently reached his teammates as well.

Fellow wideout Marquise Goodwin took to Instagram on Wednesday to complain that "the Jewish community is lashing out" at him following his comments on Jackson's Instagram a day earlier...

I understand the Jewish community is mad at me for making a comment on Jacc page yesterday. I honestly don’t see how I was being insensitive or disrespectful, or even supportive of his previous message. I never once said i agreed or disagreed with anything! I never mentioned Adolf Hitler or anything regarding the Jewish community. My comment under DJacc post read, “I wish people commented this much on a BLM topic”... In NO WAY do I condone anything Hitler related, AS I STRONGLY BELIEVE HE WAS IN THE WRONG. We all SHOULD come together in times like these instead of dividing. NOW, THAT BEING SAID FEEL FREE TO COMMENT RESPECTFULLY BELOW. ALSO REMEMBER, at the end of the day I’m a man first, I don’t tolerate people threatening me by any means, so these disrespectful comments and threats need to stop.

One of the people who commented on Goodwin's post, interestingly enough, was Jackson. But it didn't sound like he was defending Goodwin, so much as further defending himself. 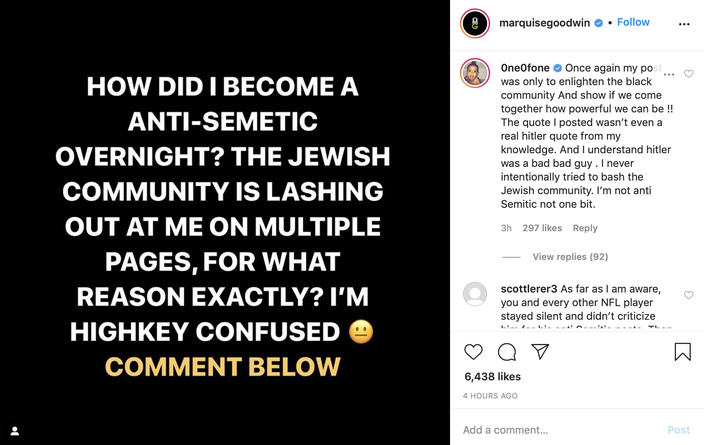 It’s easy to see how those offended by Jackson’s posts could view it as Goodwin dismissing the abhorrent quotes posted by his teammate — and the outrage it spawned — as something not as important as BLM. Goodwin’s desire for BLM to have as large a platform as possible is understandable, but considering the content of Jackson’s post and the (justified) reaction to it, it was only natural that he would get hit with some of that backlash by proximity alone.

To then follow that up with a post complaining about a reaction from “the Jewish community” as if they’re one entity and not individuals with individual personalities is tone deaf, and is the sort of broad judgment we all should be striving to avoid. And saying, “We all SHOULD come together in times like these instead of dividing” immediately after segmenting Jewish people off as their own separate group hellbent on destroying him is even worse, especially given the context of Jackson’s anti-semitic post.

And none of this accomplishes the point of Goodwin’s original comment. There are plenty of ways to support BLM, but trying to one up another marginalized group in a game of “Who has it worse?” is self-defeating, and just the kind of thing Goodwin says we should be avoiding. Instead, in the spirit of the recent emphasizing of Black Lives Matter, we should always stand up to anti-semitism and other forms of prejudice — of any kind — swiftly and without qualifiers.

If Goodwin’s intent truly is to bring people together rather than dividing, listening to the people upset by Jackson’s actions is a good place to start.

However, it also appears that Goodwin, at least initially, didn't understand why Jackson's post was anti-semitic in the first place, as he commented on another user's Instagram page that he would like an explanation as to why his posts — and former NBA player Stephen Jackson's comments in support of DeSean, in which he said the Eagles wideout was "speaking the truth" — were offensive in the first place.

DeSean Jackson has been speaking with GM Howie Roseman and others, including local businessman, activist and Sixers limited partner Michael Rubin, who reportedly put him in touch with the head of the Philadelphia Holocaust Remembrance Foundation and he's agreed to take a tour of the Philadelphia Holocaust Memorial Plaza in an effort to replace his previous ignorance with some actual knowledge.

Goodwin, it seems, could use a similar lesson.

UPDATE [4:20 p.m.] — After previously expressing anger over the feedback he got from his apparent support of DeSean Jackson, Marquise Goodwin posted the following statement on his Instagram page Wednesday afternoon.