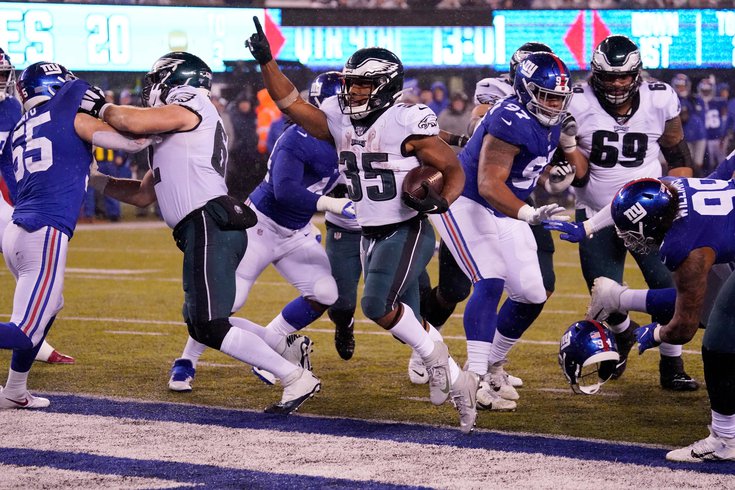 Boston Scott provided a spark for a battered Eagles offense in 2019.

Today we'll look at Boston Scott, who started last season on the practice squad, was added to the active roster in October, and who should have a significant role in the Eagles' offense in 2020.

Scott's first action in the Eagles' offense last season was in garbage time in losses against the Vikings and Cowboys. It wasn't "garbage time" for Scott, however, who showed a little juice in some otherwise meaningless snaps, and perhaps caught the eye of Doug Pederson, who began to trust him more and more as a playmaker as the season progressed.

Scott added a spark to the offense over the last four weeks of the season, culminating with a big game Week 17 against the Giants in which he scored three rushing touchdowns, while adding 84 yards on four receptions.

Below are all of Scott's touches on the season. Let's take a look at that first (if you have 13 minutes to spare, anyway), and we'll give observations thereafter.

• Scott was at his best in 2019 when the Eagles used him in the screen game, which is clear when you watch his touches above. He sees the field well, knows how to patiently let his blockers in front of him do their job, and he hits the gas when there's daylight. It's probably his best attribute.

• As an outside runner, when he has some space, he can make tacklers miss. His posterization of Janoris Jenkins was the best example of that above.

• As an inside runner, he's effective on quick hitters, because he's hard for defenders to find behind the line of scrimmage. By the time you find him, he's already by you. As a tackle breaker, he's certainly not Christian Okoye in Tecmo Bowl, but he's not exactly Donnel Pumphrey either. At 5'6, 203, he's girthy, and can run through arm tackles, but he's not a pile-pusher, obviously.

• As a receiver, Scott caught every single one of the first 21 targets that came his way in 2019. That's an eye-popping stat, but it's a little misleading. Almost all of those were on screens, jet sweeps, or short throws into the flat. I'm not sure he caught a single pass more than 10 yards down the field. Scott has drawn some comparisons to Darren Sproles, mainly because of the way both players are built, and they way they can move in the open field, but Scott has not yet proven that he can line up in the slot, or on the outside, and beat a defender one-on-one as a receiver. Should he become that, he'll truly be more like Sproles in his prime.

To note, there was a play against the Giants in which he lined up in the slot, and absolutely shook Alec Ogletree on a route, but Carson Wentz missed him, so perhaps that ability is there. We just haven't seen it yet. If he can develop as a receiver, Pederson can have a lot of fun creating matchup challenges for opposing defenses by pairing Scott with Miles Sanders, who has definitively shown that he can be a downfield receiver.

• We did not look at his pass protection. (That's a little more time-consuming to find. Sorry.)

• Because he also served as a kick returner and punt returner, we cut up those reps as well:

• The attributes needed for Scott to become a good kick/punt returner are there. As noted above, in the screen game, he's adept at lining up his blocks and knowing when to throttle up and throttle down. That translates to punt returns, as you can see above.

Also as noted above, as an inside runner, he's effective as a "get it and go" guy, which translates to kick returns.

• There's some good and some bad, in terms of awareness.

On the "good" side, he does a nice job of sprinting up and fielding short punts. You can see examples of that against the Vikings and Bills, in which he was able to field punts that other returners would have let bounce, which can sometimes add on 15-20 yards of field position. Those are hidden yards that he preserved. Of course, in the Bills example, he got hit soon after, and fumbled the ball away. Call a fair catch on those jawns, BosCo.

On the "bad" side, he fielded two punts inside the 8. (I say the 8 because the Eagles don't adhere to the more commonly used "Don't field the ball inside the 10" philosophy -- They use the 8.)

Anyway, Scott fielded two punts at around 5, both of which probably would have been touchbacks, and one of which caused the Eagles to start at their own 6 at a crucial juncture against the Patriots, because Rudy Ford committed a block in the back foul.

• The fumbles are a problem. You can't take the ball out of Carson Wentz's hands before he even takes the field.

Scott emphatically secured his 2020 roster spot by making plays down the stretch in 2019, and while Miles Sanders will be "the man" at running back, Scott will be part of offensive game plans as a complementary piece, especially in the passing game.

However, it is understandable why the Eagles have shown that they are interested in bringing in an additional veteran back. That will likely be a power guy who can push piles in short yardage situations and ease the load on Sanders in the fourth quarter when the Eagles have leads and are running their "four-minute offense." I don't believe that Scott is ideal in that role.

The belief here is that Scott would flourish in a No. 3 RB role who can enter games situationally, and who proved in 2019 that he can be the primary back in a pinch, should he have to take over for an injured Sanders.