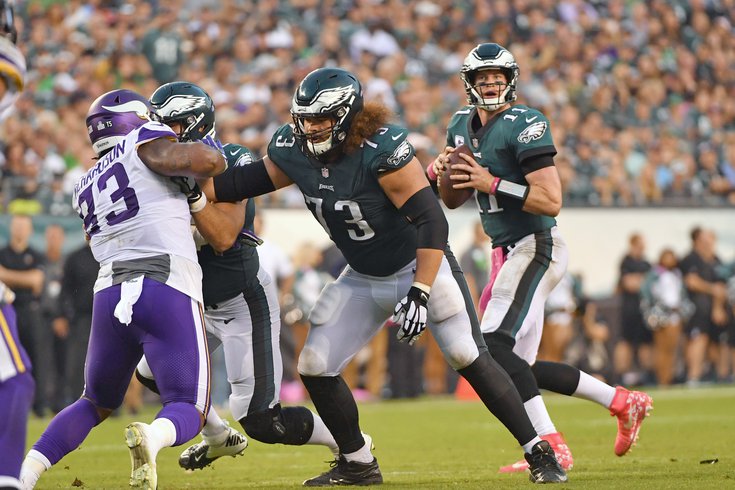 We can probably say that Isaac Seumalo is good now.

It took him a while, but in mid-April, Kelce finally announced that he would be returning for the 2020 season, allowing the Eagles to breathe a huge sigh of relief. Kelce played every single one of the Eagles' 1,184 offensive snaps in 2019, earning his third straight first-team All-Pro nod.

He can do things athletically that no other center in the NFL can do, and he has become a solid anchor in the middle of the line. Kelce is the best center in the NFL, and if he were to add another first-team All Pro or two (probably two) to the mantle, he would have to at least be discussed as a Hall of Famer.

Seumalo's 2019 season got off to a horrendous start Week 2 against the Falcons, when he had one of the worst Eagles offensive lineman performances I've ever watched. However, unlike in 2017 when he had a similarly disastrous outing Week 2 against the Chiefs, the coaching staff stuck with him. Seumalo settled down, and by the end of the season, he was playing like an above average starter.

I have not yet watched Seumalo's season in full, but he stood out in a positive way on many occasions while watching guys like Andre Dillard and Matt Pryor.

The Eagles have Seumalo under contract at very reasonable cap numbers through the next three seasons.

Before Brandon Brooks' tore an Achilles, ending his 2020 season before it even got started, we took a detailed look at the three games Pryor played in during the 2019 season.

In case you missed it, here are Pryor's notable moments from the 147 snaps he played in 2019, in Twitter thread form.

This offseason, we'll look at a handful of Eagles players who are either new, or are already with the team but we perhaps don't know a lot about them just yet due to limited action. We'll start off the series with Matt Pryor, ha. 🔥 (Thread and article)https://t.co/mQcrYk9Rgx

The conclusion I drew from that exercise was that Pryor is best suited as a backup, and maybe only at guard. His size and power are nice, but if he were to have to start multiple games, opposing defensive coordinators would look to put him in situations where he was forced to try to handle speed, especially if asked to play on the edge, and I don't think that would go well.

With Brooks' injury, Pryor really couldn't be in a better situation, with the opportunity to step in as the starting RG in between Kelce and Lane Johnson, who are arguably the best players at their positions in the NFL. If he can't lock down that job heading into his third year in the Eagles' system, that would obviously not be a great sign for his future.

In college, at UMass and Auburn, Driscoll played both at LG and RT. As we noted last week, because of the COVID-shortened offseason, the Eagles aren't likely to try to cross-train their rookies, and will instead allow them to focus in on one position initially.

The one exception could be Driscoll, out of necessity. In a normal offseason, Driscoll would have almost certainly been cross-trained at tackle and guard, and the team may even have given him a look at center. For now, center is off the table, but because the Eagles are lighter on offensive line depth this year than they usually are with the losses of Brooks to injury, (maybe) Jason Peters to ???, and Halapoulivaati Vaitai to free agency, they could really use a guy who can come off the bench and fill in at multiple spots.

Driscoll should also get an opportunity in training camp to compete with Pryor at the starting RG spot. While he did not play RG specifically in college, Driscoll does have experience on the right side at RT, so getting used to footwork adjustments shouldn't be a concern, and as noted above, he has guard experience.

While he was rarely active on game day, the Eagles thought enough of Herbig as a 2019 undrafted free agent that he spent the entire season on the Eagles' active roster. At 6'4, 335, Herbig is something of a bizzarro Kelce, both in terms of size and athleticism.

With depleted depth on the interior, Herbig could maybe get a look at guard in addition to center?

Opeta spent most of the 2019 season on the practice squad, but was promoted to the 53-man roster when the Miami Dolphins tried to poach him. Opeta is an interesting prospect, as he is a weight room freak with some intriguing physical measurables:

Opeta has one year under his belt with the team after signing as a UDFA last year, and will have a chance to compete for a roster spot again.

Per a source, Juriga was one of five undrafted free agents the Eagles had a draftable grade on. The five:

Juriga's "draftable" status was backed up by his hefty amount of guaranteed money (for a UDFA):

Western Michigan center Luke Juriga to the Eagles, per a league soruce. Got $116,000 total guaranteed, including $100,000 base salary guaranteed, $16,000 signing bonus

That guaranteed money basically locks him into at least a practice squad spot.

Jeff Stoutland has said nice things about Render in the past, but he's probably just a camp body.

Good-Jones started 49 games, the most in Iowa State history, mostly at LT and C, so he does bring some experience and versatility to the table. The Eagles list him at guard.

Before Brooks' injury, a strong argument could be made that the trio of Kelce/Brooks/Seumalo formed the best interior OL in the NFL. With Brooks out, most teams would still trade their iOL for Kelce/Seumalo/Pryor (or fill in another RG), though it's not the elite unit it would be otherwise.

As for depth, while there's no Stefen Wisniewski waiting in the wings in a pinch, the Eagles do have a good number of young interior linemen they've been developing behind the scenes, and they'll hope that one or more of them take their game to the next level this offseason.