Plus, a look at where Ertz and Goedert rank among best TEs and why the Birds are so successful on the goal line (hint: they're related) 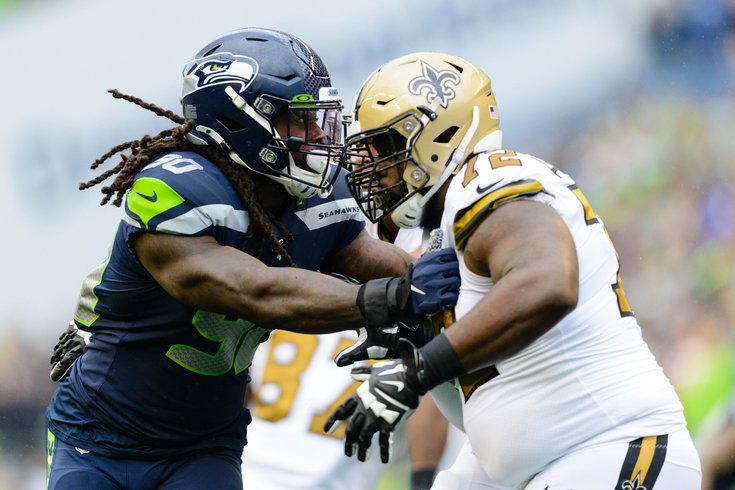 Jadeveon Clowney could still be in play for the Eagles ... if the price is right.

It's been a busy week for Eagles fans — at least it feels that way as someone who writes about the team — but there's been very little talk about actual football this week, as the conversation has centered around DeSean Jackson's anti-Semitic Instagram message in which he posted a quote falsely attributed to Adolf Hitler.

The Eagles wide receiver has since apologized, but the fallout from his comments continues as his future in Philadelphia remains somewhat uncertain at this point and other players, like Marquise Goodwin and Malik Jackson, get sucked into the controversy by posting questionable comments of their own.

This story is far from over — especially with a couple more weeks remaining before training camp, when the 33-year-old wideout will certainly be asked about this — but for the sake of this post, we're done talking about it. We have plenty of coverage all over the site, so it's not like we're just choosing to ignore an important topic. It's dominated our Eagles coverage throughout the week.

What if the price is right?

Jadeveon Clowney's name has come up quite a few times this offseason in regards to the Eagles, starting right from the fallout over his season-ending hit on quarterback Carson Wentz.

With Clowney a free agent — and the Eagles in need of some depth at defensive end — the talk quickly shifted from him as a villain to a potential future member of Jim Schwartz' defense. Originally, with him hoping to be one of the highest-paid defensive linemen in the NFL, the Eagles were pretty much priced out. But as the offseason has rolled on, his asking price has reportedly been lowered and then lowered again. And with him remaining unsigned just a few weeks out from the start of training camp, there's a chance he winds up taking considerably less than — perhaps even half of — what he entered the offseason hoping for, which was somewhere in the $20-22 million per season range.

He's reportedly turned down offers of $17-18 million from the Dolphins, as well as an offer from his former team, the Seahawks, that was somewhere in the $13-16 million range. And now, he may opt to wait to sign with a team until after training camp and would then be willing to take considerably less. At least that's the latest from NFL insider John Clayton, who appeared on The Sports Bash on 97.3 ESPN radio earlier this week.

"He's going to be interested in Philadelphia because one of the things and one of the reasons he turned down Cleveland is because he wants to go to a winning team," Clayton explained.

"He turned down Miami twice because he didn't expect them to be a winning team."

Clayton mentioned that Clowney might take a deal in the $9-10 million range to play for a good deal, with the thought that he will get his money on the free agent market next season.  He also said of he was to sign with a team like the Eagles, and then left in free agency, the team would likely receive a third-round compensatory pick, something Howie Roseman could find attractive.

"I think if its a low price they might do it, but right now probably no," Clayton said.  [973espn.com]

That still might be too rich for the Eagles to swallow, especially given Clowney's injury history (he's currently coming off surgery to repair a sports hernia), but it at least gives them a chance if they're looking to make one more splash this offseason.

Over at ESPN, they're currently working through the task of ranking the best offensive skill players in the NFL, and Eagles quarterback Carson Wentz found himself among the Top 10 quarterbacks in the league, coming in at eight on Jeremy Fowler's list, one spot behind Tom Brady and one ahead of Dak Prescott.

There's been a lot of comparison between Wentz and Prescott this offseason, especially with Prescott, who will likely be playing under the franchise tag this season, still looking to out-earn his Eagles counterpart in his new contract. But it seems, at least according to most national analysts, that Wentz still outranks Prescott, despite the two having very similar numbers.

Here's a look at what Fowler (and some anonymous NFL coaches) had to say about Wentz...

We went into this exercise thinking Wentz vs. Dak Prescott would be tight, but it wasn't all that close, with Wentz holding a lead of nearly a full point over Prescott. However, Wentz is hardly a slam dunk for many. Some left him off their ballots because of the injuries.

"Such a creator -- no play is dead," an NFL head coach said.

Added an NFL coordinator: "It's hard to argue he's not top-10. You just wish he had a complete season. If he wins that Super Bowl in Philly, he's consensus top-five, because he's a top-five talent."

Wentz is elite outside the pocket, where he registered an 87.4 QBR with 7.5 yards per attempt and four touchdowns, production that ranks third leaguewide. Everyone saw that outrageous throw against Washington.

There's a lot going on with Wentz, who watched Nick Foles win his Super Bowl and has struggled to relate to some teammates. He's a nice guy who has probably isolated with his inner circle too much but is improving in that area.

He has eclipsed 64% passing once in four seasons, which isn't ideal. But winning four consecutive games to squeak into last season's playoffs with mostly practice-squad players earned him street cred.

"He can carry a team," one NFL assistant said. "Only a few guys can say that."  [espn.com]

This one was clear-cut. Ertz was No. 3 or 4 on most ballots behind Kittle and Kelce. No tight end has more targets the past two seasons than Ertz's 291, partly because he gets open so often -- and smoothly.

"A lot like Kelce. Runs up on guys, threatens the safety," one veteran NFL coach said. "He won't let [the defense] dictate his route. He attacks it. Loose, fluid. Gets a ton of double coverage and still wins."

He's also similar to Kelce in that his blocking is considered just OK. But Ertz has Dallas Goedert to handle inline work while he plays to his strengths. Ertz turned 16 red zone targets into eight catches and five touchdowns. His five drops are not ideal but reasonable given his target share.

"There's a drop-off after Kittle and Kelce, but this guy is a championship-level player," one AFC exec said. "He smokes us almost every time we play them. He doesn't beat you deep, but he doesn't need to because he's so good with the intermediate stuff. I'd take him above almost everybody."  [espn.com]

And Dallas Goedert was listed as an honorable mention, and he probably would be higher than that if he was the Eagles No. 1 option.

Dallas Goedert, Philadelphia Eagles: "He's undervalued right now. Watch them play, and what he does is a little bit of everything. Better blocker than Ertz and not much of a falloff at receiver, either." -- AFC scout  [espn.com]

With two talented tight ends who will both be free agents after the 2021 season, Howie Roseman is going to have a difficult decision to make, because there's almost no scenario in which the Eagles can afford to keep both once Goedert's rookie contract expires.

With so much of the local sports media wrapped up in that other story I promised I wouldn't mention, it's obviously a ESPN-heavy day, and this one actually wraps the last two entries up in a nice pretty bow.

Matt Bowen took a look at the best players, teams and schemes in goal-line situations, and the Eagles had a nice showing. They were one of two teams, along with the Titans, that Bowen listed as the best inside the five-yard line, which is pretty surprising given they lack the kind of traditional goal-line running back like the Titans have in Derrick Henry.

The Eagles posted a successful play rate of 64.0% inside the 5-yard line in 2019. With Wentz's ability to make tight-window throws and play off-schedule, the Eagles can scheme up tight ends in the pass game. And given the athletic upside of rookie wide receiver Jalen Reagor, I expect Pederson to use his traits this season on fly sweeps and screens in the tight red zone. Then there is the ability of running back Miles Sanders, who allows the Eagles to run inside zone schemes with the ball close to the end zone.  [espn.com]

One of the big reasons for the Eagles success, which Bowen alluded to above, is their use of the tight end "follow" concept, which uses one tight end to clear out the middle defender and allows the other to cut back across the inside behind the first tight end. It was listed as one of his best goal-line schemes, with him highlighting how good the Eagles are at utilizing it. And it works so well for the Birds because they have not just one of the best tight ends in football, but also one of the five best players inside the five-yard line. That's right, Zach Ertz.

Yes, coach Doug Pederson is going to scheme for Ertz in this area of the field, but don't sleep on the matchup ability or the route-running traits of the Eagles' tight end here. Ertz is smooth through the route stem, weaving defenders in coverage and gaining separation to the ball. Plus, with his 6-foot-5 frame and catch radius, Ertz can also body up defensive backs to create leverage to the ball.  [espn.com]

Earlier on Friday, our own Jimmy Kempski published his running back preview heading into training camp. His partner on BGN Radio, Brandon Gowton, also dropped his preview of the Eagles back field. And while he thinks Sanders reaching his proclaimed goal of winning MVP might be a stretch, he does see big things for the Penn State product in Year 2.

Sanders is unlikely to achieve that lofty goal considering the league hasn’t seen a running back finish as MVP since 2012. Going back further, there have only been two non-quarterback MVP winners since 2007.

Still, Sanders is very well poised to have a big 2020 season. He no longer has inexperience working against him like he did early on as a rookie. He also no longer has to share a backfield with an established veteran since Jordan Howard departed in free agency.

Sanders projects to be the Eagles’ most featured running back since the Doug Pederson era began in 2016. Now, this isn’t to suggest that he’ll regularly be logging 20 carries per game. First of all, only Derrick Henry made it over that mark last year (and just barely at 20.2). Secondly, we know the Eagles have been wont to rotate their backs.

But unlike in years past, Sanders is the guy.  [bleedinggreennation.com]