Malik Jackson, Julian Edelman and others have spoken out against (and in defense of) the Eagles wideout 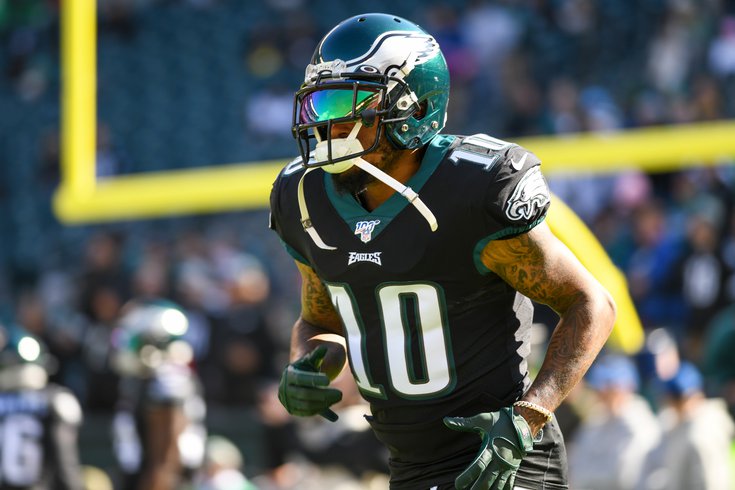 Days after Desean Jackson posted a picture of a fake Adolf Hitler quote, and then apologized multiple times, the social media posts continue to flood in from every corner of the internet.

Yesterday, teammate Marquise Goodwin claimed that the Jewish community was "lashing out" at him for mentioning that BLM deserves as many comments as this situation does.

Since then, the wide receiver kind of apologized for it, but not really, throwing this on his Instagram:

Another Eagles teammate, defensive lineman Malik Jackson decided it would be helpful to refer to Louis Farrakhan — an outspoken anti-semitic leader who spouts controversy, and the figure whose July 4th speech was likely the catalyst for DeSean's anti-semitic post — as honorable while defending his teammate and pointing out that he didn't literally "quote" Hitler, that he instead posted a picture of a book that had a quote on the page.

On Jews, Farrakhan has said (among a variety of disparaging and hateful things), that Jews dislike him "because they are wicked and they know they cannot say that I am lying about them. They just say: 'He is a bigot. He is anti-Semitic.'" Farrakhan has also reportedly referred to Judaism as a "dirty religion" and said Hitler was "a very great man" after the Chair of the Anti-Defamation League referred to the Nation of Islam leader as "Black Hitler."

In that context, Jackson's response is even more troubling.

Desean Jackson, also in the last 24 hours, liked a comment on IG from Dr. Umar Johnson that included an image of DJax, with the line “I pray for the day black men stop having to apologize for what we say."

Johnson holds a lot of controversial views that are unfortunately far too common in the United States, but not particularly common among BLM supporters. Here's a snippet from a reaction to a lecture Johnson gave in Pittsburgh:

Though Johnson stated that he “loves” our LGBTQ brothers and sisters, he cannot condone their actions because not only is homosexuality a “cancer on the Black community,” it also, along with abortion and interracial marriage, is a tool that will ultimately dismantle the Black race. Also, to be accepting and/or tolerant of the LGBTQ movement is to simultaneously be in compliance with criminal acts such as bestiality and pedophilia. [New Pittsburgh Courier]

If that guy defended me, I'd probably be concerned.

Another Jackson — this one former NBA guard Stephen — claimed that he and DeSean spoke and the Eagles wideout claimed the Eagles were trying to "fire" him. Whether the continued controversy weighs on Howie Roseman and Jeffrey Lurie, two men of Jewish descent with whom Jackson's NFL fate lies, will be interesting to follow.

After originally saying that DeSean was "speaking the truth" and spending much of the last few days defending the Eagles wideout, Jackson backtracked a bit on Wednesday night when he apologized on CNN and acknowledged "I could've changed my words."

It's not all bad news, thankfully.

Fellow superstar pass-catcher Julian Edelman, whose story is pretty interesting — he re-connected with his Jewish heritage after becoming an adult — offered to take Jackson to the National Holocaust Museum in Washington in exchange for attending an African American institution as a way for both men to learn about the other's culture:

And finally, a former Eagle who actually gets it, Emmanuel Acho, saying that "ignorance is no longer an excuse."

We can’t just talk about racism or prejudice when we are impacted.

What's obvious is that Jackson is in hot water, still, and this story isn't going anywhere any time soon. He seems to be uncomfortable and less than committed to owning his mistake. Full disclosure: I am Jewish and I am far from satisfied.

Every day it feels like this is getting worse and more misconstrued. There is work to be done, and in the age of social media it's really hard not to fall into the traps Jackson has fallen into. The world is watching him closely and, as Edelman said, there is a true opportunity here to make the world a better place.