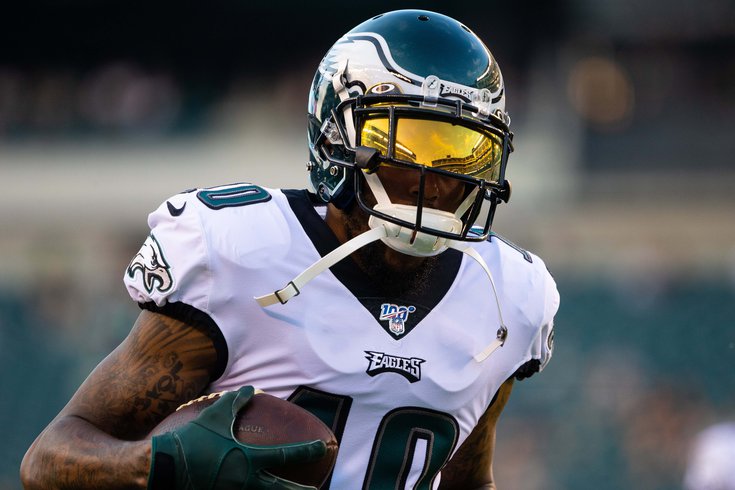 Statements have been released and apologies have been proffered from Jackson in both video form and the gold standard of that particular cottage industry, the notes app.

From there, immediate reaction poured in from those supporting Jackson to those wanting him set him adrift along with everything in between. Maybe the biggest constituency of all was the football-obsessed, those concerned only about losing the WR1 with no proven alternative to replace Jackson.

In the midst of all of that, the Eagles chose education over exclusion. Tolerance over cancel culture, but all of that comes with enough footnotes to keep the most-skilled academic busy for months.

The organization still has its finger in the air, monitoring, waiting.

The story is manageable from a sports perspective, but the minute ESPN turns to CNN (except for Malcolm Jenkins) or FOX Sports becomes FOX News, all bets are off. The Eagles kept this open-ended for a reason.

On the surface, the easiest route for the organization would have been to just release Jackson, especially after former team president Joe Banner, who was in charge when the Eagles first drafted Jackson in 2008, pressed the issue on Twitter. Like Banner, his long-time friend and team owner Jeffrey Lurie, and his one-time Padawan, GM Howie Roseman, are Jewish. More so if anyone posts an excerpt that begins with “Hitler said,” and brings home the point with “Hitler was right,” any Jew has the right to be very upset.

Adam Schefter tied the potential decision to money and whether Jackson’s behavior could be used to default his contract.

Eagles decision on whether to keep DeSean Jackson could come down to whether post is a default under his contract. Jackson is guaranteed $4.8M this year in salary and already received a $2M option bonus. Eagles could try to figure out a way out of guaranteed salary first.

Also understand, even with no controversy, the Eagles were hopeful that Jalen Reagor would intern under Jackson this season and be ready to take over the Z role by 2021 when Jackson would be turning 35 in December of that season, if he's still around. Speeding that up would hardly be insurmountable unless Roseman and Co. truly believe the Eagles could be a legitimate Super Bowl contender this season. Sometimes, being honest evaluators on where you are is the most difficult thing to do with NFL teams, however.

The fact that Lurie ultimately makes this decision and Roseman is intimately involved should hold weight to those who don’t have any skin in the game, but moral outrage is often as addictive as it’s selective.

To many who avoid context like it’s COVID-19, the organization was hamstrung by the way it handled Riley Cooper in 2013, not understanding the disgraced receiver was on the verge of actually being released until Michael Vick stepped in with an olive branch.

Jackson now has his own olive branch in the form of the most powerful people in the organization who happen to be Jewish and are working hard behind the scenes to smooth all of this over.

ADL appreciates @DeSeanJackson10 apology for the #antisemitic posts on his Instagram and the @Eagles condemnation of them. It's our hope he uses this moment as a chance to work with the Jewish community and educate himself further on how dangerous and hurtful antisemitism is.

Cooper and Jackson, however, is no apples-to-apples comparison considering the toxic political environment we are now in.

In some ways that also helps Jackson, though, because as long as Scott Van Pelt discussing the issue doesn’t turn into Tucker Carlson discussing it, this plan can move forward. And COVID-19, protests, riots and Trump, Trump, Trump all keep Jackson away from the political-punditry class. In a normal year with a normal news cycle, Jackson’s goose might be cooked.

Whatever outcome is fair, what Jackson posted is indefensible. At 33, he should be smart and savvy enough to stay away from Adolf Hitler. From the scant evidence available, however, it certainly seems like Jackson neither has a keen understanding of history and wasn't familiar with Louis Farrakhan’s anti-Semitic record.

You can jump to evil intent with Jackson if you like but in this case, Occam’s Razor will point you toward ignorance on the subject matter.

Too many assume celebrity and fame are automatically accompanied by intellectual heft when it comes to difficult and layered subjects, never mind fairly obvious ones. Some even demand the ill-equipped use their platforms to advance particular ideologies.

Jackson’s oh-so-public and embarrassing misstep is the unintended consequence of that kind of sentiment.

And the Tony Bruno Show with Harry Mayes on SiriusXM’s Dan Patrick Radio: