Amid fallout of Philly star's Instagram post, too few public figures have have taken the simple stand that would help 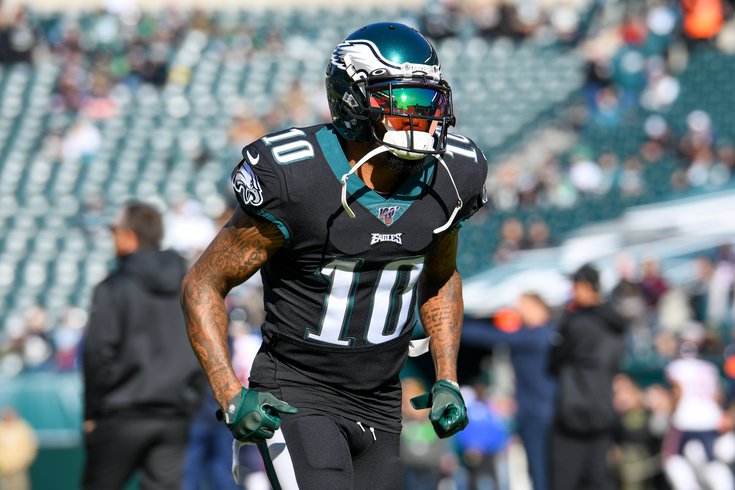 Philadelphia Eagles wide receiver DeSean Jackson apologized several times for Instagram posts that cast Jewish people in a negative light. Former Eagles defensive end Chris Long is among the few who have stated what needs to be said about this incident.

The content of DeSean Jackson's anti-Semitic Instagram posts was hurtful, disturbing and weak-minded in its comprehension of human struggle in all of its forms, both historical and contemporary.

Up until this incident, Jackson had been widely praised for speaking out forcefully in the Philadelphia Eagles locker room to relate the legitimate message of Black Lives Matter, a cause that has been supported by hundreds of Jewish organizations in the United States and beyond.

When Jackson reacted last month to a tweet from SportsRadio 94 WIP host Angelo Cataldi, who had asked athletes to stop talking about social issues, I was even among those who supported Jackson's frustrated response. He values his platform to promote justice, good for him.

I've been one of DeSean Jackson's biggest fans for more than a decade, and was ecstatic when he returned to Philadelphia last season. Eagles fans everywhere rejoiced in the homecoming. D-Jax has entertained us all and made us happy, time and again, with his tremendous athletic gifts.

I am also Jewish, so the past few days have been a shameful and uncomfortable letdown. It's a punch in the gut and it's hard to write about, honestly.

Jackson has apologized, albeit imperfectly, for falsely quoting Hitler and poorly comprehending a book passage that exhorted Black people to greatness by scapegoating Jewish people.

The problem with this entire incident is absolutely not Black Lives Matter and the grievances that people across the world have taken to the streets in support of that movement. That should be obvious. The demand for racial equality and justice, and an end to systems and cultural codes that oppress Black people, is vitally important to be heard, uplifted and put into practice.

The issue with this incident — the reason it's not just DeSean Jackson's problem to deal with — is that it aired out a radical stereotype that has been perpetuated about Jews for centuries. That stereotype is not just untrue in its generalization and simplification of history. It's pernicious and threatening to Jewish people, full stop.

I will say, I have been very heartened by commenters on many forums and those who have responded to news stories unequivocally denouncing anti-Semitism and condemning Jackson's post. The debate about his intentions, what the Eagles should do and how this story relates to other incidents is exhaustingly taking place in numerous venues, but it is very nice to see so many people react against anti-Semitism.

What has been somewhat disappointing is the relative lack of statements from public figures, whether from athletes or others, clearly and explicitly rejecting anti-Semitism and affirming Jewish people. It doesn't even require a defense or a shaming of Jackson to do so.

Taking that stand is not a commentary on whether Jackson's expressed intent to uplift Black lives is valid. It is valid. He just shouldn't need to misquote Hitler or turn to the radical incitements of Louis Farrakhan (whose credibility as a social unifier across race and religion is dubious at absolute best) to make a heartfelt and impactful statement for Black advancement.

Chris Long, who has been outspoken on many topics, addressed the issue on Wednesday on his "Green Light" podcast. He did so as simply, clearly and supportively as possible, without completely throwing Jackson under the bus. The former Eagles defensive end came out strongly against anti-Semitism, and rightly pointed out a general hypocrisy around doing so:

I can't speak for the many people in the media or on Twitter who kind of bite their tongue on this thing because when it comes to anti-Semitism, it's not in vogue to denounce it, or they have some geopolitical inclination or political inclination that complicates denouncing it. I think it's f***** up, unequivocally, and I try not paint faith or religion with a broad brush. I don't care what religion it is. I know it's in vogue to punch Nazis. We love doing memes about that. We all would say we would punch a Nazi. But it doesn't seem like it's in vogue to call out anti-Semitism.

Long's entire podcast segment on Jackson (some of which includes explicit language, be warned) can be heard below.

Whew! Mailbag was loaded... link in bio. Please don’t comment unless you listen. Thank y’all. It wasn’t all serious shit on #GreenLightPod

This video is to transition from the incident, and move forward as a community. Not to harp on @DeSeanJackson10 mistake, but to progress by educating ourselves. We can’t move forward while allowing ourselves to leave another minority race in the dark.#Equality pic.twitter.com/MnLnCCYzQL

"We need to understand that Jewish people deal with the same amount of hate and similar hardships and hard times," Banner said. "I'm not trying to get emotional right now, but I want to preach to the Black and Brown that we need to uplift them and put our arms around them just as much."

Many people have fixated, reasonably, on the Eagles' past handling of Riley Cooper and his horrible use of the N-word. It has been reported that Jackson is very conscious of this comparison and bothered by the team's warning that his regrettable actions could get him cut, while Cooper was given sensitivity training and then a contract extension. Anger over how that went down is justified, but it should not detract from what went wrong here. It should also be pointed out that the Eagles were ready to cut Cooper at the time, before teammates like Michael Vick and Jason Avant came to his defense.

Maybe Jackson is truly contrite and his Jewish community outreach will help him re-emerge from this incident a better, more enlightened person, and still a stronger champion for Black justice, too. I would like to see that. It isn't my place to tell Black people specifically how to attain their goals, but it is the place of Jewish people to assert that anti-Semitism is just as flat-out wrong, in principle, as any other form of prejudice.

As fans, it always seems a bit ridiculous to feel as if we "know" public figures, but it also hurts when people we root for make misguided decisions that call their own character into question.

How this plays out will come down to Jackson's continued actions and the decisions of those they impact. I'm certainly not the Eagles and I'm far from the most observant Jewish person to take offense, but forgiveness is a powerful step to take. In a time of deep division over many issues troubling the world today, it seems like the right one.

The most constructive thing Jackson can do is realize that he isn't being asked to apologize for being an advocate for his people. It's because what he shared was wrong, harmful and unproductive toward the shared goal of a better society that respects and values everyone.