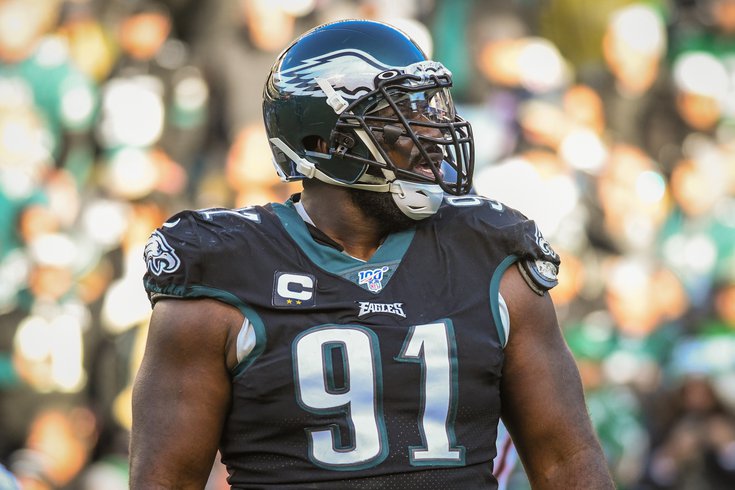 In 2019, Cox was still recovering from offseason foot surgery throughout most of training camp, and he was not the same elite player we have come to know over his Eagles career. He had his worst numbers in the Jim Schwartz era:

In past seasons, Cox didn't always have great numbers, but you could see on the eye test that he was dominant, and opening up opportunities for his defensive line teammates. While that was still true to some degree in 2019, that "eye test dominance" wasn't consistent.

Cox did close the season strongly, wreaking havoc on the Seahawks' interior OL in the playoffs, which is a good sign for the health of his foot, and thus, his 2020 production. As we noted on Monday in our look at the defensive ends, Brandon Graham bounced back in 2019 after similar circumstances in 2018.

One other quick note -- In past training camps, Cox didn't always seem super interested, but in real games he would turn it on. He's a player who could theoretically thrive in a season in which there's no training camp or preseason, going up against offensive linemen who actually need that offseason work.

During free agency, the Eagles had sort of their 1A and 1B options in CB Byron Jones and Hargrave. When the Dolphins offered Jones money that the Eagles were uncomfortable with (particularly the guaranteed portion of his deal), the Eagles pivoted from Jones to Hargrave.

While not a move that many were predicting, it did make sense. The Eagles liked Hargrave quite a bit in the 2016 NFL Draft, but opted to select Isaac Seumalo in the third round instead, partly because they wanted to beef up protection for Carson Wentz, who they took at second overall that year (duh).

But beyond that, the Eagles had a need to get younger and more durable at defensive tackle, and Hargrave is an ascending player entering his fifth year in the NFL at 27 years of age. (He turned 27 in February).

Hargrave was sort of an oddball fit in the Steelers' 3-4 scheme, but he still produced. His career numbers:

In Jim Schwartz's scheme, Hargrave will have more opportunities to be a disruptive upfield player both against the run and the pass. He has a chance to become a legitimate difference maker.

Jackson was lost for the season with a Lisfranc injury late in the game in the Eagles' Week 1 win over Washington.

"Malik Jackson was a big loss for us," Howie Roseman said during his season-ending press conference in January. "This is a guy who didn't miss a game in eight years, and then 30-some-odd plays into his Eagles career was down, and that was a guy we were really excited about."

Jackson was a great player on the Super Bowl-winning Broncos' defensive line in 2015, which caused the Jags to break the bank for him on a 6-year $85 million deal in 2016. In Jacksonville, he had 18 sacks over three seasons. The Eagles obviously believed he could still be a disruptive interior rusher in the NFL, and in my view, he had a strong camp last offseason.

During locker room clean-out day at the conclusion of the 2019 season, Jackson said he felt like he would be healthy anywhere between April and June, and will be ready to go for the 2020 season. (We don't have an update on Jackson's prediction, but will soon.)

Jackson made news recently when he defended DeSean Jackson's anti-Semitic Instagram post. His cap number in 2020 is a mere $4,661,000, but it escalates drastically in 2021. If the team were to trade or release him, it would result in over $16 million in dead money (in 2021), so he's not going anywhere, for now.

The Eagles traded a seventh-round pick for Ridgeway during the 2019 draft, and he was a decent rotational DT who could eat up snaps before he went on IR with an ankle injury. Ridgeway was a free agent this offseason, but he signed back with the team on a one-year deal worth $1,010,000, only $25K of which is guaranteed. As such, while his roster spot feels pretty secure, and while he is still only 25 years old, he'll have to fend off the younger players below.

The Eagles had a draftable grade on Williams, and were able to snatch him up as an undrafted free agent.

As a redshirt senior in 2019 at Michigan State, Williams had 48 tackles (7.5 for loss), 5 sacks, and a forced fumble. He does not offer plus athleticism. Some highlights:

If we're assuming that Ridgeway is likely to make the roster, Wiliams would really have to stand out in a shortened camp to convince the team to keep a fifth defensive tackle. He feels like a really good candidate for the practice squad.

The Eagles traded Hector to the Cardinals for safety / special teams "standout" Rudy Ford during 2019 training camp, and then signed Hector back to the team after the Cardinals waived him. So they basically got Rudy Ford for nothing. Boom! Take that, Arizona.

Huggins played in 3 games for the Eagles last season, and he had 3 tackles. He failed to provide any obvious opportunities to make a hug pun.