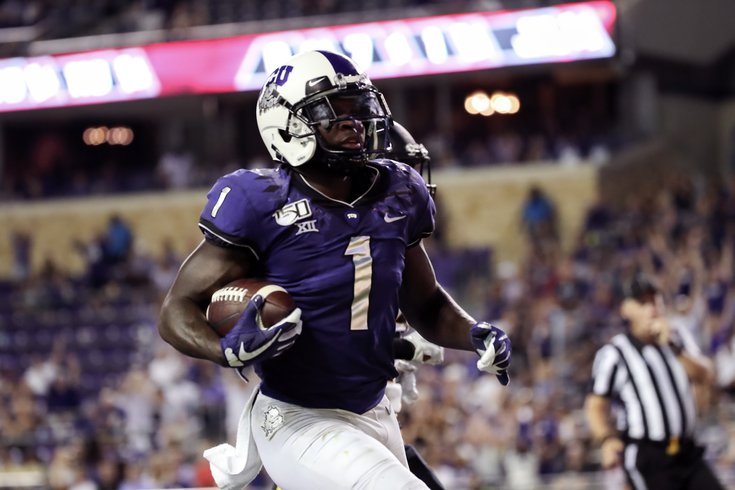 UPDATE [2:53 p.m.] — After announcing earlier in the day that they had agreed to terms on a four-year deal with first-round wideout Jalen Reagor, the team tweeted on Monday afternoon that they had also signed the rest of their remaining un-signed rookies, including quarterback Jalen Hurts, who received a noticeable bonus.

#Eagles have agreed to terms with S K’Von Wallace. pic.twitter.com/nHxnBxBqtT

#Eagles have agreed to terms with WR John Hightower. pic.twitter.com/jv7XUj6Uj0

#Eagles have agreed to terms with DE Casey Toohill. pic.twitter.com/JLbvgR2AcX

The team had previously announced the signings of Quez Watkins and Prince Tega Wanogho. With Monday's newly-signed players, the Eagles have now inked all 10 of their draft picks to rookie deals. All of the Eagles rookies are expected to report to the NovaCare Complex on Tuesday for the start of training camp.

With just a few days remaining before rookies report to the NovaCare Complex to begin 2020 training camp, the Eagles have taken care of some business and locked down wide receiver and 21st-overall pick Jalen Reagor with a four-year rookie contract.

According to reports, the deal is worth $13.3 and includes a fifth-year option, as is the standard for first-round picks.

The #Eagles and first-round WR Jalen Reagor have agreed to terms on his four-year, $13.3M contract with a fifth-year option.

For those keeping track at home, that's now three of the Eagles 10 rookies who have been signed — Quez Watkins and Prince Tega Wanogho are the others. Jalen Hurts (second round), Davion Taylor (third round) and K'Von Wallace (fourth round) are among those who remain unsigned. You can read more about them and their projected annual salary cap hits, here.

Reagor will naturally have the biggest cap hit of any of the rookies given where he was taken in the draft, with Hurts' annual cap hit being a little less than half of Reagor's throughout the life of their rookie deals. Prior to signing Reagor, the Eagles had $24.7 million in cap space (according to OverTheCap.com).

Stay tuned as many more rookie contracts are likely to be signed this week as players begin returning to South Philly for the start of an unorthodox training camp amid the COVID-19 pandemic.