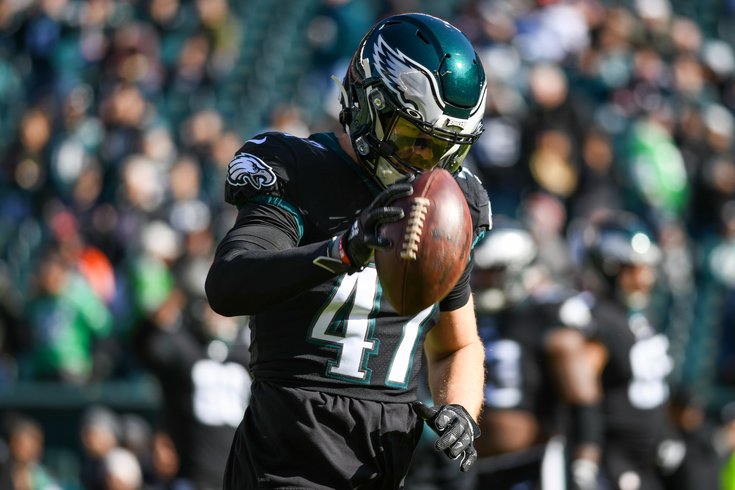 Today we'll look at the linebackers, which is an obvious weak spot on the team's roster.

Gerry was second on the team in tackles in 2019, behind only Malcolm Jenkins, and he was a rare example of a player who made notable improvements from 2018 to 2019. Heading into 2020, Gerry appears to be the only highly likely three-down linebacker on the roster. If he were a sub-package guy, the belief here is that fans would think of Gerry as a intriguing player. As the "No. 1 linebacker" of sorts, it easy to understand why many view him (and the position as a whole) as a serious concern.

Gerry is better in coverage than he is against the run. In the Eagles' defense, his deficiencies against the run probably aren't that big a deal, considering that all four of their starting defensive linemen are plus run defenders.

Back in May, we took a deep-dive look at Edwards' play during the 2019 season. I came away from the exercise surprised by how much I liked.

To begin, Edwards was an absolute stud against the run. In the regular defense, he only played 112 snaps, most of which came in a four-game span when Nigel Bradham was out with an injury. In those 112 snaps, Edwards had 22 tackles, which means that he made a tackle on 19.6 percent of the plays he was on the field. That is impressive production. It is worth noting, however, that Jim Schwartz only put Edwards on the field in likely run down situations. According to ProFootballFocus, Edwards played 89 snaps against the run, and only 33 snaps against the pass.

His positive traits, as noted in the analysis from May:

In 2019, he was largely untested in coverage. In a small sample size, it's fairly obvious that he sees the field well, and is aware of what the opposing offense is trying to do, but faster running backs and tight ends shouldn't have much trouble getting separation on him, due to the lack of speed. If he is going to be more than just a third linebacker on run downs, it's only a matter of time before opposing offenses try to take advantage of man-to-man opportunities against him.

Still, with Bradham gone, Edwards is very likely to have an increased role in 2020. At a minimum, he should be in the game when there are three linebackers on the field. He was very good against the run as a rookie, and he can fill a role in Schwartz's defense similar to that of Joe Walker or Dannell Ellerbe, but potentially be much better than anyone the team has had in that role. That would put his game participation share at somewhere around 10-30 percent, depending on the opponent.

He could be a key player against some of the teams in the NFC that want to run the ball, like the Cowboys, Giants, 49ers, and Seahawks, for example.

The question is whether Schwartz will allow Edwards to show that he can be something more than a run down specialist, or if concerns with Edwards' athleticism will limit him to that role. While his tape in 2019 was indeed very good, the expectations for Edwards heading into 2020 might be a little inflated. The bet here is that you won't see much of him in nickel or dime.

After Kamu Grugier-Hill went on IR last season, the Eagles made Riley the special teams captain. That's a noteworthy development, given that Riley was added to the roster during the season. He had a share of the Eagles' team lead with 10 special teams tackles, and should probably be thought of as a near-lock to make the roster.

The following sentence will be a common theme throughout the rest of this post. Riley is an undersized linebacker, but he does have good athleticism:

Offensively, the Eagles drafted/signed a bunch of speed guys at the wide receiver position, hoping that one will emerge as a playmaker. That also seems to be the strategy defensively at linebacker.

As we noted during the leadup to the draft and thereafter, Taylor hasn't played much football, as religious beliefs kept him off the field until his mother finally allowed him to play in college. As such, he's a project, though he is one with very good athletic measurables.

He fits the Eagles' type of linebacker, as he has similar size/athleticism traits as guys like Kamu Grugier-Hill, Duke Riley, and Jatavis Brown.

The Eagles are going to lean on their veteran players in a shortened offseason, but Taylor is obviously going to make the team, and he should be an immediate special teams contributor if he can crack the 46-man active roster on game day. He'll have a chance to grow as a player in the regular defense over time, but we may not see much of him in 2020 because of that lack of experience. If he is able to get on the field, it will be because his athletic traits are just too good to keep him off of it, but that will require him to have an outstanding camp.

While we all understand by now that the Eagles simply don't value the linebacker position very much, they did select two of them in the 2020 NFL Draft. Bradley had 249 tackles, 3 INTs, and a couple of forced fumbles over the last three seasons at Temple, and like Taylor above, he has good athleticism, as he ran a 4.51 40 at the Combine.

Again, Bradley's initial contributions will likely have to come on special teams, which he has ideal speed for, but he'll have to stand out in camp to have any chance of getting on the field in the regular defense early in the 2020 season.

At 5’11, 221, broken record alert, Brown is an undersized linebacker with speed.

He was drafted by the Chargers in the fifth round of the 2016 NFL Draft, and had a significant role in their defense for three years, before seeing his role decrease in 2019. His career numbers:

Back in April, we took a close look at Brown's 2019 season, and it wasn't pretty.

Those who follow the Chargers closely mostly think that Brown had a very promising rookie season, but injuries and a scheme change perhaps stunted his growth. The Eagles signed him to a one-year deal worth $1,047,500, $550,000 of which is guaranteed. That's fine. Yes, the 2019 tape is clearly bad, but I don't think this is a bad signing, necessarily. Brown has good speed, which makes him a viable special teams contributor, with some upside in coverage in sub-packages because of his athleticism. It'll be on the Eagles (and Brown) to re-unlock his potential.

Singleton played in 10 games in 2019. He was a core special teamer, but did not stand out in any way in that role. He did not get any snaps in the regular defense. With the additions of guys like Riley (during the 2019 season), as well as Taylor, Bradley, and Brown during the 2020 offseason, Singleton is probably on the outside looking in.

Olson is a UDFA who was the 2019 Buck Buchanan Award winner, which is given to the most outstanding defensive player in the FCS. He was a tackling machine at Montana the last two seasons.

So why didn't he get drafted? Well, he ran a 4.88 40 at the Combine. By comparison, Edwards, who we noted above as lacking in the athleticism department, ran a 4.77 (at his pro day).