No Phillies players have returned a positive test yet since being exposed to the Marlins over the weekend. 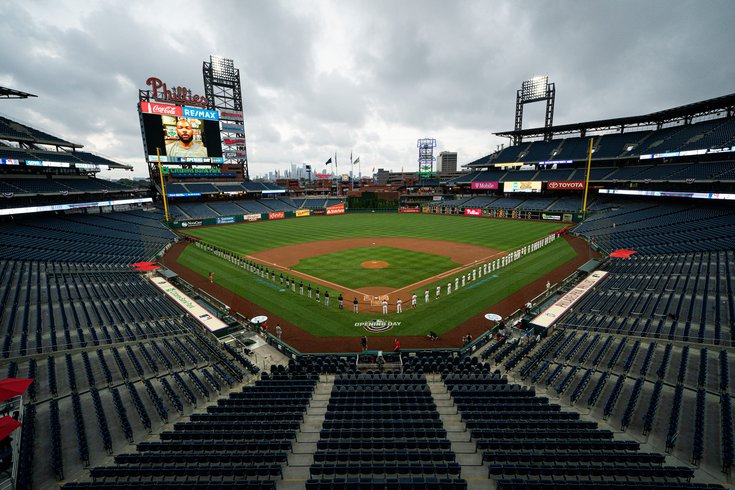 Citizens Bank Park prior to first pitch on Opening Day.

In response, the team has closed Citizens Bank Park and canceled all activities at the park "until further notice." And that reportedly includes postponing their weekend series against the Blue Jays. At least that's what Toronto manager Charlie Montoyo told reporters on Thursday.

The #BlueJays vs. Phillies games this weekend have been postponed per Charlie Montoyo

The Phillies were expected to resume its season this weekend with a three game series against Toronto, beginning with a Saturday doubleheader. Now, however, with two members of their staff testing positive and there still being a chance that one or more players could test positive any day following that exposure, it's unknown when the Phillies will return to the field.

Despite the Phillies players still returning no positive tests, they're certainly not out of the woods yet, as positive results often don't reveal themselves until several days after exposure. And if/when they are safely cleared, there has to be some concern over the conditioning of Phillies players heading into whatever series comes next. With no baseball activities at CBP "until further notice" — and with players only receiving scattered workouts this week — players would likely need a a few days to ramp back up to game shape or could risk an unnecessary injury.

The Phillies' series against Toronto was scheduled to be played at Citizens Bank Park, with the Phillies playing as the road team after Canada told the Blue Jays they didn't want them playing in Toronto and risking the health of their citizens after they've been much stricter (and have seen far better results) than the U.S. in their response to the pandemic.

Instead of facing Toronto, the Phillies will remain off this week following their exposure to a Marlins team that has now had 17 members in all test positive for COVID-19 during the opening weekend of the 2020 MLB season. Previously, one of the Phillies visiting clubhouse attendants tested positive early this week following close interactions with members of the Miami squad. The Marlins team remains quarantined in its Philadelphia hotel following the coronavirus outbreak that's impacted half of the roster.

Now, after already having their season suspended once this week, players will have to wait even longer to get back on the field. And they don't seem too happy about it...

All jokes aside... this really sucks.

For the Phillies, the next series on their schedule was originally in jeopardy as well, as they were supposed to travel to Miami on Tuesday — I think you can see where this is going — to start a three-game set against whatever's left of the Marlins. Of course, with the Marlins' future remaining uncertain, the Phillies will instead return against the Yankees on Monday, when they'll begin to make up some of the games they've already missed.