What they're saying: Eagles should still be sellers, Gerry should be benched, Fulgham making history

Plus, how the Eagles found their breakout wide receiver and a look at what's wrong with Zach Ertz 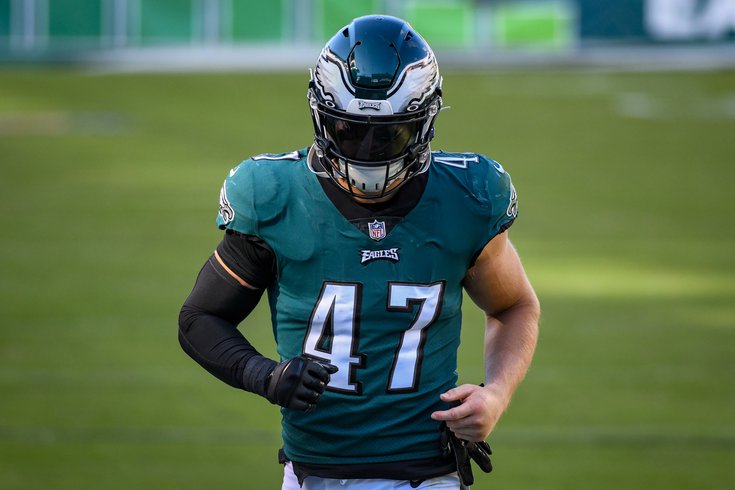 It's been a weird week so far in Eagles land, following a loss in which the Eagles played better than they have for much of the season and a season-ending injury that threw the door wide open in the NFC East.

Should the Eagles continue to treat this like a normal year and go for what will ultimately be a hollow division title? Or should they consider focusing on the future, possibly selling some of their aging players under big contracts? With three weeks left until the trade deadline, it's a question worth asking — not to mention one Howie Roseman and the rest of the front office will need to answer before long.

Our own Jimmy Kempski wrote on Monday that, despite Dak Prescott's injury, the Eagles should keep their eyes on the long-term, a stance that he's been firmly committed to for a few weeks now. If they do sell, they certainly have options in players like Zach Ertz and Fletcher Cox that could fetch a nice return. And it's worth noting that selling and trying to develop your youth is not the same as "tanking." Just because a team isn't in win-now mode does not mean they are trying to actively lose. There's a big difference.

But for the Eagles, it's becoming quite clear that they aren't going to be contending for anything other than winning the worst division in the history of football and the chance to host a playoff game. If that's the case, why not try to re-tool and come back better the following year? Unload some of your bigger contracts, get younger and acquire more draft picks. Then try this thing again.

Since this is a What They're Saying — and not a What Matt's Saying — you don't have to take my word for it. Let's get right into it...

Tommy Lawlor of Iggles Blitz tried to tackle the mess that is the Philadelphia Eagles and did a pretty good job of nailing down the biggest issues this team has. This part was particularly on the nose and we wanted to include it as a little background for the main crux of the piece below.

Here we sit with a team of guys in their 30’s or early 20’s. Not many players are in their prime. That’s not how you want a football team. Howie Roseman wanted a balance of youth and winning now. That’s tricky to get right. And he missed pretty badly.

One of the most frustrating things about this team is that they make so many critical mistakes. If LeBlanc makes an easy tackle on third down, the Steelers have to punt. Instead, he whiffs and that turns into a TD drive. John Hightower catches a ball near the sideline late in the half. Instead of going out of bounds, he tries to get extra yards. Pederson had to burn a timeout and that likely cost the Eagles three points. Carson Wentz threw costly INTs in the first three games. All turnovers hurt. Those really hurt. They were game-changers.

I don’t think you can say this is just coaching. There is something wrong with this team in terms of chemistry. Instead of bringing out the best in each other, too often they seem to bring out the worst in each other. This feels like a collection of individuals rather than a team.  [igglesblitz.com]

We promised in the intro that we'd be talking about this Eagles team as deadline sellers, so here you go. Lawlor really boils it down to a concise point in that last paragraph about the difference between tanking and rebuilding while avoiding "the trap" of trying to win the division.

I’m not completely down on this team. Carson Wentz played his best game on Sunday and if he gets going, that changes a lot. Good Wentz can carry mediocre players to wins. Still, this team has a lot of issues. Getting Wentz hot and getting players back from IR will certainly help, but it sure feels like there are fatal flaws. I hope Pederson, Roseman and most importantly, Jeffrey Lurie, see these flaws and act accordingly.

Sell at the trade deadline and focus on young talent. Do not fall into the trap of trying to win the division. If the young guys get you there, great. This is clearly not a true contender so winning the division would be for bragging rights, nothing more.  [igglesblitz.com]

What's the deal with Ertz?

One of the guys who the Eagles could look to sell at the deadline is Zach Ertz, but he's not making it any easier for Howie Roseman and Co. with his play on the field this season. While Travis Fulgham has been turning heads, the one pass-catcher that Birds fans thought they could count on this season was Ertz, and he's been struggling mightily, with just five catches for 15 yards in his last two games, which is especially surprising given the absence of Dallas Goedert.

Over at ESPN.com, Tim McManus took a look at what's been ailing the team's top tight end — is it his pending contract situation, his age finally catching up to him or simply the struggles of his quarterback taking a toll on his numbers?

According to McManus, while the other two may be contributing factors, it's the latter problem that's really been hurting Ertz this season. However, that's the one that seems to provide the quickest fix, especially as Wentz has looked slightly better recently after a horrible start to the season.

Surprisingly, it has been a struggle for Carson Wentz and Ertz to sync up, and that really seems to be the root of the issue.

"Carson and Zach, they have to continue to work," Pederson said. "I haven't seen the ball travel as high towards Zach than it is right now. ... So it's just a little bit of mistiming right now with those two, but I know it's something they will work out and work on each week to get it corrected."

According to Pro Football Focus data, only 21 of Ertz's 33 targets have been catchable. That means Ertz has secured every catchable pass this season except one.

While it looks to be improving, Wentz has been inconsistent with his accuracy and decision-making through five games, and that has affected the bottom line for Ertz.  [espn.com]

If you're searching for positives coming out of the Eagles loss on Sunday and heading into what could very likely be another one on Sunday against the Ravens — they're 7.5-point underdogs, according to TheLines.com — you likely already know where to look: Travis Fulgham.

The former sixth-round pick had 10 catches for 152 yards and a touchdown on Sunday following his big game-winning touchdown grab against the 49ers a week earlier. To say he's been a pleasant surprise would be an understatement — although it's also worth wondering if he would've even seen the field had it not been for numerous injuries at the wide receiver position, which makes you wonder how this whole scouting* thing works.

*To be fair, the Eagles did poach him from the Lions practice squad and apparently have had their eye on him since before the 2019 draft (more on that in a second), so we'll give them the benefit of the doubt on this one.

Since making his Eagles debut two weeks ago, Fulgham has been putting up some historic numbers. Here's more from Reuben Frank of NBC Sports Philadelphia...

BIG-PLAY TRAVIS: Although he’s only played two games, Fulgham already has as many catches of 30 yards or more by an Eagles receiver since opening day of LAST year. J.J. Arcega-Whiteside, Alshon Jeffery and DeSean Jackson also have two, and Nelson Agholor, Jalen Reagor, Deontay Burnett and Greg Ward have one each. ...

REMEMBER THAT GUY T.O.? Fulgham is the first player with a TD catch in each of his first two games in an Eagles uniform since T.O. had three against the Giants and one against the Vikings the first two weeks of 2004.  [nbcsports.com]

Over at Sports Illustrated's MMQB, Albert Breer had a good nugget on Travis Fulgham following his breakout performance against the Steelers on Sunday. It wasn't about his eye-popping numbers or the fact that he didn't start playing football until high school. Rather, it was from the Eagles perspective, about how the team wound up with the Lions' former sixth-round pick out of Old Dominion.

Philly Northeast area scout Jim Ward loved Fulgham leading into the ’19 draft and, accordingly, the Eagles had strong grades on him. The problem was they only had three day three picks, they wound up trading one of them for DT Hassan Ridgeway, and they’d already taken a receiver, Stanford’s J.J. Arcega-Whiteside, in the second round.

The Lions wound up drafting Fulgham in the sixth round, but the Eagles kept tracking him. Fulgham went from Detroit’s active roster to its practice squad that September, then back on the active roster in December. Detroit then waived him in August and the Packers claimed him, then waived him 10 days later. And at that point, with expanded training camp rosters, the Eagles finally had a spot for him. So they put in the claim, he spent a few weeks on the practice squad in September, and then got called up nine days ago.

At the time, he didn’t have an NFL catch. Two days later, he scored the 42-yard, fourth-quarter touchdown that put Philly ahead for good in its first win of the season, over San Francisco. And Sunday, he went for 152 yards and another score on 10 catches. Now, if the Eagles knew he was capable of that? They wouldn’t have waited so long to grab him. But they did feel like something was there all along, so this is a testament, in my mind, to not giving up on an evaluation, and in this case not giving up on Fulgham sure has paid off.  [si.com]

In Sunday's loss to the Steelers, there's little question that the Eagles biggest issue on the field was the play of their linebackers, specifically Nate Gerry, who got absolutely torched by Chase Claypool for his fourth — and ultimately game-sealing — touchdown late in the game on Sunday. Gerry and fellow linebacker Alex Singleton allowed seven catches for 78 yards and a pair of touchdowns in the loss, but that doesn't even begin to tell the story of just how bad Gerry has been this season.

Warning: It's worse than you could possibly even imagine.

At this point, it would be hard to play worse than Gerry has through five games, especially in coverage. According to PFF, Gerry is allowing a 154.6 passer rating to opposing quarterbacks. Opposing receivers have caught all 23 passes thrown their way -- with Gerry in coverage -- for 267 yards and four touchdowns in just five games.

While the Eagles seemingly aren’t eager to put rookies Davion Taylor and Shaun Bradley on the field, it’s alarming that the front office hasn’t sought out veteran help in free agency with the way Gerry has played to start the campaign. He just isn’t playing well enough for the defense to feature him on all three downs.

A former college safety, Gerry is supposed to be a standout in coverage on defense. Instead, he’s been the unit’s Achilles heel in that regard. It’s time to make a change with Gerry, even with T.J. Edwards on injured reserve.  [nj.com]