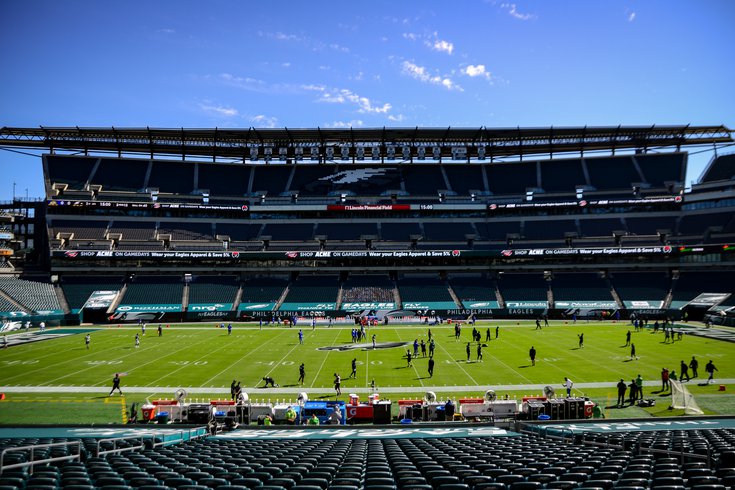 At least nobody has to witness this mess in person.

The city of Philadelphia announced Tuesday changes to outdoor venue capacity on Tuesday afternoon, in line with recent changes at the statewide level.

The full changes as announced by Health Comissioner Thomas Farley:

These changes will go into effect as of Friday, October 16th, opening the door for attendance at Eagles home games moving forward.

Outdoor venues in Pennslyvania with a capacity of greater than 10,000 people are now allowed to have 15 percent capacity up to 7,500 people in attendance, figures that are all-encompassing for people at the events, from fans to media down to the players on the field. Those guidelines, however, are able to be modified by the cities to set their own limits within that framework.

An example of how that plays out in practice was available in Pittsburgh last weekend, where the Eagles fell to the Steelers in a cross-state matchup. The Steelers released a statement before the game saying the 7,500 person limit would allow them to make approximately 5,500 seats available, with season ticket holders getting first priority. Attendance figures show the headcount in Pittsburgh was actually lower than that number, with 4,708 fans in attendance on Sunday.

In a statement provided by the Eagles, President Don Smolenski announced their occupancy would be limited to 7,500 people, with face-covering masks required at all times for fans two and up. Bandanas and face coverings containing valves, mesh material, or holes of any kind are not permitted.

As part of the gameday experience, tailgating and social gatherings in the parking lots at the sports complex will not be permitted, and only fans with tickets to the game will be granted access to the lots. Lots are expected to open approximately two hours before kickoff on game days. Gate will operate on a contactless basis and are expected to open 90 minutes before kickoff, with fans assigned to a specific gate corresponding with their ticket/seating.

All transactions for concessions at the game will be cashless, and all meals/menu options will be disposable pre-packaged options.

Tickets will be available to season ticket holders starting on Wednesday for the first two games, the Ravens this Sunday and Giants next Thursday. They'll be sold in groups with the ability to buy as many as six tickets in the same "seating pod." If there are tickets remaining that are not bought by season ticket holders they'll go on sale to the general public at a later date. The rest of the games will have on-sale dates soon.

The Eagles will join an evolving list of teams allows fans into their stadiums, something that has been a stated goal for the organization dating back to before the season started. In late August, Eagles owner Jeffery Lurie told reporters he embraced the idea of fans attending home games in areas that had opened up before Pennsylvania, saying the Eagles would be working to bring fans back to Lincoln Financial Field as soon as possible.

"We've had a lot of really creative and constructive conversations with the state and the city, and that continues on a daily and weekly basis. We are hopeful there's going to be real ways of having significant fans in our stadium pretty soon," Lurie said in late August. "Maybe not for September but after that, and we're looking at innovative ways of testing, with rapid testing, with point-of-care testing, with home testing."

"Fans are the backbone of the sport. I really believe that — I wouldn't want to sit here and tell you that we're going to stop those fans in Arizona or wherever it is from attending if it's safe there just because we think there's some advantage. I'd rather have them enjoy our sport."